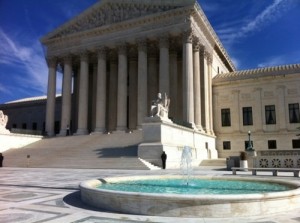 This morning the Supreme Court listened to arguments for and against making the sale of violent video games to minors illegal.  California Attorney General Zackery Morazzini argued that “the deviant level of violence in a certain category of video games” requires legal restrictions to protect minors.  Representing the video game industry, attorney Paul Smith argued that video games are a protected form of speech under the First Amendment and that the only special exception that has been carved out until now with regard to protecting minors is one for sexual content.