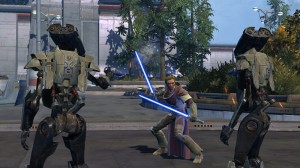 Back in November BioWare hosted a Jedi Immersion Day and invited members of the press and fansite community to get a first look at the Jedi Knight and Jedi Consular.  These lucky few got a chance at some serious gameplay time.  On December 15th, BioWare lifted the news embargo and the SWTOR community has been flooded with articles, videos, gameplay impressions.  Here are some of our favorite reveals: