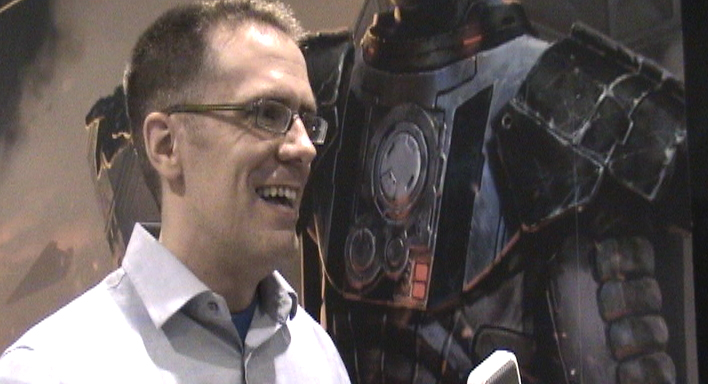 James Ohlen, Game Director of Star Wars: The Old Republic, took a few minutes to talk to us at PAX East.  We touch on guilds, how designers must now listen to playtesting feedback, and the balancing act of expectation vs. innovation.  James also takes our Sith or Jedi test, The Test of the Elevator Door.

The brief silence after the one-minute mark denotes the ninety-seconds of questions about guilds that James couldn’t discuss.

Transcript of interview after the jump.

CRR: A couple days ago they released a lot of information about guilds, which was very exciting to a lot of people.  Can you tell us a little bit about the pre-launch?  You have guilds that are registering ahead of time, is that right?

James Ohlen: Yeah, so we know that one of the key points to having a successful Massively Multiplayer Online Role-Playing Game is by having a game that really encourages social play and encourages people to find online friends, joining guilds.  That’s the glue that keeps players coming back to play your game over and over again.  So we want to make sure that our guilds are very successful.  So one of our plans was to have this early launch of the guild program so players could form their guilds way before the game launches, and therefore, they can have their groups together and they’ll already be ready.  It’s something that other companies haven’t done yet and we felt, “Hey it’s just a little innovation in guilds.”

[We talked a little about certain aspects of the guild pre-launch.  James wasn’t able to elaborate on specific details such as how BioWare will address some guilds’ concerns about caps on number of members per guild, or how guilds will react to having their server chosen for them by BioWare, etc.]

CRR: Anytime you try to take control away from the player, their first reaction is to say, “Wait a minute!”

JO: One thing that we think is really important is to take feedback from our fanbase and make sure that we use that feedback to make the game that they want to play, so if we get a lot of feedback on certain aspects of the game we’re going to make modifications.  If people don’t like something we’re not going to say, “Hey, we’re designers, we know best.”

CRR: That brings me to something wonderful I heard yesterday.  Daniel Erickson quoted you, he said, “This is what James Ohlen tells us.  The whole end part of the product is just polish.  Everything that you have for a philosophy, and everything that you think as a designer that you think is right, is now wrong.  The players are the ones that are right.”  Can you explain what you meant by that?

CRR: This past summer a lot of the talk was about how choice matters and you make these decisions in flashpoints and things change and don’t stay the same.  Now we’re talking about repeatability.  Is that one of the things that maybe changed a little bit from your original idea?

JO: Yeah, the thing about flashpoints is they’re one of our key social activities.  They encourage players to group up into groups of four and have lots of fun together.  Our flashpoints can be really funny.  They’re just one of the best social activities, and the fact is, making them repeatable allows players to have that experience as many times as they want.  It’s something that’s obviously not innovative in that most MMOs do allow that to happen.  So yeah, we’ve decided flashpoints need to be something that need to be repeatable.

CRR: While we’re on the subject of innovation, I know that there are some critics that say that TOR is not innovative enough, there’s nothing new.  One of the things that is new is the fully-voiced experience and the multi-player dialogue system.  Do you think people are not appreciating how innovative just that part can really make the game a completely different experience?

JO: The strange thing is, we get comments from both sides.  There’s lots of MMO fans who think that we’ve gone too far, you know, with story, and that we’re not going to produce an MMO and it’s horrible.  And then we have people who think that, we haven’t gone far enough, and it’s just another MMO.  You’re never going to win that battle.  I feel we’ve taken the smart road, which is we’re working within a genre – that’s the MMO genre — we have a huge fan base and they have certain expectations, and we’ve made sure that we’re going to give them everything they expect.  They want massive, huge worlds, where they don’t feel constrained, where they feel they’re immersed in the universe.  They need to have lots of systems where they can socialize – guilds and chat and raids and the ability to engage in PvP, all sorts of activities that are social in nature.  We’ve given all those.

Crafting – for a long time people were wondering are they even going to have crafting.  We have a very cool crafting system that really works within the Star Wars universe and is very innovative as well.  I think it’s going to appeal to crafters more than a lot of the crafting systems in some of the other games.  For example, in our crafting system we add the ability to crit on a crafted item, which will actually make that item as valuable as, say, an item you might get in a raid or a battleground.  It’s something crafters have always complained about, is they can’t really create items that people want.  So that’s something we took to heart and put in.

But yeah, we’ve innovated definitely in story, and that’s innovation I think people – even people who didn’t think they wanted it – are going to play the game and realize, “Actually, I did want that!”  And the reason they’re going to think that is because MMORPGs are RPGs.  Role-playing games have advanced over the years to the point now where you don’t get your story through big blocks of text, you get your story through very interactive voice-over and cinematic scenes.  That’s what you see now, you see that in BioWare games, you see that in SquareSoft games, you even see that in a game like Oblivion or Fallout 3.  Everybody’s doing that and I think it’s just the natural step for MMORPGs to start having much more immersive storytelling.  The feedback we’re getting from players is basically telling us that they love the story,  In fact, this is a story I love to tell.  There was a guy in one of the research tests we had.  All of the guys were asked the question, “Why did you join into this test?”  One of the guys was, like, “Well, I wanted to see how big a disaster story was.  So I signed up for the test to see how bad it was going to be.  But after playing for five minutes, I loved the story!”  So he was one of the big story lovers then.  So I was, like, “Oh, that’s funny.”

I think part of it comes from the fact that so many games in the past have promised to deliver story and fans have been disappointed when they played it and they haven’t really delivered that story aspect.  BioWare has a very strong foundation with story and we’ve been able to bring that to Star Wars: The Old Republic.  We have very experienced writers, we have people who know how to build tools that allow you build cinematics, we know the importance of the player owning the story.  That’s one thing BioWare games have always tried to do is make the player feel like he owns the story, not the author.  That’s the difference between movies and books and video games.  In a video game you have to make the player feel like he’s in control at all times, including in story.

CRR: Before I let you go, on our podcast we have a regular feature.  It’s called, “Sith or Jedi” and we challenge each other in real life situations to see what you would do.  I’m going to propose to you a situation: You are tired, dead-beat, from your busy day at PAX.  You head back to your hotel, hit the elevator button, you wait a little while, and finally it comes and you get in the elevator and you hit your floor button.  Out of the corner of your eye you see someone sort of scurrying toward the elevator and you’re not sure they’re going to make it.  What do you do?  Do you

JO: Well, I’m a polite Canadian, so I’d have to put my arm out and let them on.

CRR: That sounds very Jedi.  You walk the Light Side.  Well, thank you, James Ohlen, it’s been a pleasure to talk to you.