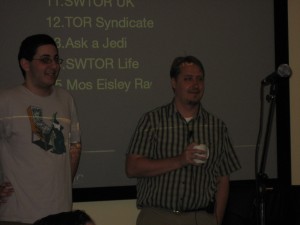 Principal Lead Systems Designer Damion Schubert answered questions on a wide range of topics.  We got some important reveals in this twenty-four minute Q&A session.  Listen to the full audio to hear Kathy get derailed when Damion starts giving her the crazy eyebrows as she asks her question about gear for neutral players!  She begged Brooks to let her re-record her question, but he was a meanie and said no.  He also laughed and said, ‘I felt SO bad for you!”

Our favorite reveals after the jump.

Here are our favorite reveals:

No Responses to “Fansite Summit: Q&A with Damion Schubert and His Eyebrows”