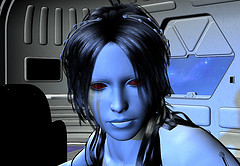 I sat staring at my computer screen to see the icon of this adorable Chiss female Imperial Agent.  I was like, WOW, that was a great looking character that had been selected for me to play.  Actually, it was for either me or Kathy, but we talked ahead of time about what we wanted to try out and I selected the imperial agent. My character had short hair and looked like she had lots of secrets.

I logged into Star Wars: The Old Republic game for the first time.  I was so excited, I thought I would burst!   The first thing I noticed was how terrific the graphics were.  It wasn’t just the graphics of the environment, it was the character graphics that blew me away. When you saw the close-ups of the characters in cut scenes, you saw so much detail from complexion to wrinkles or scars. It was amazing!

As I moved from quest assignment to quest assignment, I was really enjoying the storyline of my character and the different places those quests were taking me.  One of the first quests took me to meet a Hutt named Nemro.  I was like WOW, a real Hutt already!

As I adventured out of the city, almost every encounter with humanoids were in groups of two or three.  It was a little awkward at first trying to find the right cover.  At this point, I didn’t know the shortcut keybindings.  I was having to click on my cover ability, which felt a little weird.  Fighting felt really good.  You have an ability to stun multiple targets early on so you could stun two while fighting the third.

I took my time looking around the environment.  I would try to climb hills, rocks, pipes, and anything else in my way.  It was through this exploring that I discovered a datacron!  I was so excited!  I saw this icon on my map that was not a quest icon.  I couldn’t figure out what it was and I went off in search of it.  In order to get to this obscure icon, I had to climb up a pipe and jump across to a hilltop.   Lo and behold, there it sat, a datacron.   That had to be one of the highlights of my gameplay!

I only got to level six or seven in my playtime before it was time to move on to something else, but you need to know by this point, I was totally immersed in the story and environment of this character.  I would have gotten a lot further along had I not been so interested in exploring!  Know this, I am so playing an Imperial Agent at release.

No Responses to “My walk down the dark side….”