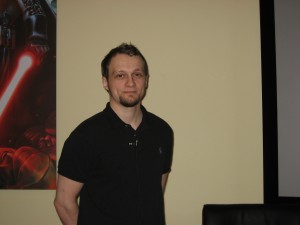 Gabe Amatangelo's Warzone Blows Everyone Away

Lead PvP Designer Gabe Amatangelo kicked off the Tuesday session with a short presentation on PvP in warzones.  Many features of SWTOR warzones focus on building community behavior through the proper placement of “carrots,” which entice players away from that all-for-me mentality, and nudges them toward a let’s-coordinate-and-beat-the-other-guys strategy.

Recap of Gabe’s presentation, our warzone experiences, and Q&A highlights after the jump.

Badges, Community Building PvP
In SWTOR warzones, each player has a role to play, and each player is encouraged to play as part of a team.  Badges are rewarded for an array of teamwork-oriented behaviors.

THE WARZONE
The presentation ended and we were allowed to start the Alderaan warzone.  After a short practice session, we started the match for keepsies.  Lots of laughing and dying and killing.  First match went to the Republic, second match went to the Empire.  Stephen Reid warned that whoever won two out of three would earn a nerf for the entire faction.  That didn’t stop the Republic team from going for the win in the final match,  an exciting back and forth exchange that many times looked like a Sith victory, but always tilted back in the Republic’s favor.

“WHY CAN’T THE EMPIRE STOP LOSING???” someone shouted at one point.  I think it was Dover.  He likes to shout a lot.

Finally, the Republic prevailed.  Stephen Reid looked at the numbers ticking down and pronounced, “It’s over.”  Within another minute or so, the Republic had made a comeback of, shall we say, heroic proportions.  The last seconds of the match had TOROcast’s Samm, refusing to die as he slashed, tumbled, and even somehow leapt onto the gun turret, with Empire players trying to do him in.  Just when it looked like it was curtains for his Jedi Consular, the timer finally ran out and the victory message declared the Republic winners.   Applause and high-fives went around the room.

I leaned over to Samm and asked, “How did it feel?”  Samm can always be counted on to give an honest, heartfelt reaction.

Q&A WITH GABE AMATANGELO
A Q&A session with Gabe was meant to begin immediately afterward, but got off to an amusing start when it seemed that no one had any questions.  Apparently, we were so satisfied and pumped after our Alderaan warzone experience that our brains had melted and there just wasn’t anything to ask.  Fortunately, TOROcast’s musco snapped out of it and the Q&A session began.