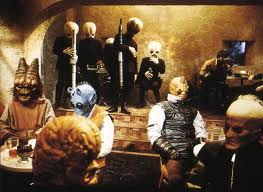 [Editor’s note: Today we welcome Staff Writer Chris Logel to the CRR team.  Chris discusses the importance of fostering social interactions between players and explains why he is hopeful that SWTOR will be a good environment for socializing.]

The MMO game genre is unlike any other in that a large number of people come together to simultaneously play in the same game space. This is naturally a very social gaming experience. Unfortunately, developers have not been very good at nurturing this inherently social space in MMOs. Their solution has typically been to do nothing and let social behaviors grow organically as an emergent result of the game’s inherently social features.

More “Creating a Sociable Game Space” and Comments after the jump.

More recently, not only have developers completely ignored designing elements which enhance the social aspect of their games, they have added features which detract from the social experience. World of Warcraft (WoW) provides us with the most obvious and well known example of this, in the infamous dungeon finder. WoW features many instanced dungeons which can be cleared for experience and gear. Prior to the implementation of the dungeon finder system, players formed groups by communicating with each other via the in-game channels. Since the implementation of the dungeon finder, this is largely unnecessary as players can simply queue up in the dungeon finder and be teleported to their group.

The problem with this system is that is incredibly impersonal. All of the emphasis is placed upon clearing content as quickly as possible rather than on the interactions between players. When groups form like this, there is a tendency for players to be far more rude and less committed to the group than they otherwise would be. After all, it is a lot easier to be a jerk to someone with whom you have had no substantive contact (see: driver’s behavior if you need any proof of this). Furthermore, without any conversation or search leading up to the formation of a group, players often turn to cold and inaccurate measurements such as gear scores to size up their fellow group mates, rather than giving them a chance or heaven forbid, talking to them. Many might say, “The community of WoW is crappy – I do not want to interact with them, I prefer to have the computer remove that headache for me.” To a degree, they  might have a point, but I would argue that the community of WoW is so dismal precisely because there is no emphasis placed upon creating a quality community by the development team!

The developers at BioWare have not spent a great deal of time promoting the more social aspects of SWTOR. But this understandable, they are just trying to get people hyped up about the game prior to release. And quite frankly, lightsabers and spaceships are significantly more exciting than social game design. Nonetheless, there are systems which have been included (and excluded) which will help develop a great community in SWTOR.

2. Emphasis on story
BioWare has placed a great deal of emphasis on story as the so-called “fourth pillar” of the MMO genre (the other three being exploration, combat and progression). Story is obviously an end unto itself, but it also brings with it the added social benefit of slowing down gameplay. By this I do not mean that the combat will be slower. Rather, the point I wish to make is that by placing an emphasis on the story, the developers are creating another level of immersion and enjoyment through which players cannot rush. A slower-paced game in this sense is also a game where people will take the time to actually speak with one another and be sociable rather than just racing to the endgame at breakneck speeds. Furthermore, the fact that there will be many story quests that are also group quests means that many players who want to get the full story out of the game will end up grouping.

3. Crafting
Although not much has yet been released about the crafting system in SWTOR from what we do know, it will be a robust and useful source of items. A properly implemented crafting system is an inherently social system because it promotes trading amongst players.

In SWTOR, two encouraging key points have been made about the crafting system. In the first place, BioWare has promised that crafted items will be in the same league as items found via raid drops. If this turns out to be true, then crafting will be a relevant gear pipeline. In many other MMOs crafted items are nearly irrelevant because they are strictly inferior to items dropped by mobs. Furthermore, BioWare has told the community that rare schematics will be exceedingly rare, increasing their value and promoting interaction with master crafters. Due to the paucity of information that has been officially released on the subject, it is difficult to gauge at this time just exactly how much of an impact the crafting system will have on the social nature of SWTOR, but there is good reason to be optimistic.

Of course even after release BioWare will continue to add new features and content to the game. The developers have stated that they have all but ruled out minigames such as Pazaak for release, but left the possibility of adding them after the game launches. In my opinion, BioWare should strongly consider adding social mini-games. One of the biggest draws of SWTOR is of course the fact that it takes place in the Star Wars galaxy. Adding social features to the game just for their own sake is a worthwhile endeavor, especially for a game with such a rich backstory and world behind it.

The developers of Star Wars Galaxies made many mistakes before and after the game’s launch. One thing they did get right was the inclusion of social classes. Social classes were neither combat nor trade centered. Instead, social classes were primarily centered around mechanics that applied only to other players. For example, there was a special kind of damage that could only be healed by player entertainers in cantinas, and politicians used their skills to enhance player-run cities. Now, I am not suggesting that BioWare add social classes, but they should at least continue to add and/or update features that foster the social Star Wars experience. That is to say social features specifically centered around Star Wars themes.

Are there any social features that you would like to see added to the game? Let us know in the comments section of this page or on the Corellian Run Radio forums.