M.E.R.C.S. (Mecrosa Elite Reconnaissance & Combat Squad) is a Sith Empire guild for the US Eastern Time zone. The guild is PVE server, but this is no casual guild, this is a hardcore guild focused on Flashpoints and Operations. Their secondary focus will be on PVP in SWTOR Warzones. They also have their own podcast, along with helpful audio discussing the guild’s general information and structure. There are some requirements for being in this guild, but first let’s find out more from the co-Guild Leader, Matticon.

M.E.R.C.S. was founded in the spring of 2006, in the Dungeons and Dragons Online MMO, by four online friends, that didn’t like the “constraints” the guild they were In, put on their members, and decided to create their own. During our time in DDO, M.E.R.C.S. developed the reputation of being a casual guild that could hang with the “Hardcore” guilds on the server. It was then that we discovered that indeed you could create a guild that combined a casual atmosphere with a hardcore gaming style. Our philosophy carried over to several other MMO’s (the latest being VG) and we have collected some exceptional players with unique and somewhat dysfunctional personalities in the last 5 years.

“I think what makes us successful is that none of us consider ourselves hardcore, we just like to progress, get things done. To progress there has to be some form of structure and accountability, and I would say tough skin…” Savatage

What is one aspect that separates M.E.R.C.S. from the other hardcore guilds?

We have collected very “unique” personalities over the years, and it’s the experiences you have with those people that make a game fun. We have often symbolized the guild as being like the ‘85 Bears. A dynamic cast of characters focused on a single objective. It’s amazing to see members who left for either RL reasons in the past, or did not continue playing the game we were currently invested in; apply to the guild when they discovered we were heading to SWTOR. These members still remember the experiences and the camaraderie of the group. They often enjoy sharing those memories and experiences that happened years ago, that they still remember to this day.

How does crafting or crew skills fit into your guild and the hardcore gamer?

We have a belief that we wish to experience the “Entire game”. Which gives us the hardcore image, therefore we will undoubtedly have members that will craft and develop crew skills in a hardcore fashion. If being a hardcore crafter, rewards that crafter with the ability to increase the guilds efficiency by let’s say 3%, we are going to have people in the guild that are going to want to do that without prompting. Hardcore players tend to want to be effective on every level of gameplay, which includes crafting and crew skills. 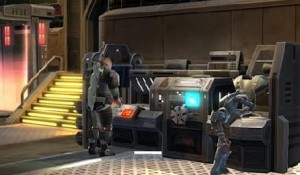 Where can people interested apply and find an application?

The link to the application is on the top of the home page just to the left of the *Login, (Join M.E.R.C.S.), since it’s a guildportal site the applicant will need to create an account M.E.R.C.S./guildportal, which allows them to apply to the guild.

On a side note many of us have been listening to the girls for a very long time and they do an awesome job. I still remember Kathy’s interview with Georg Zoeller at the fansite Summit, the quick fire round is hilarious…

Are you a hardcore gamer, getting ready for The Old Republic? Stop by M.E.R.C.S. and check them out. They might be just the guild for you.

Thanks to Matticon and Savatage for their time.

If you are a guild looking to be highlighted on Corellian Run Radio, drop me an email at jason@corellianrun.com, or leave a post in our forums at CRR.