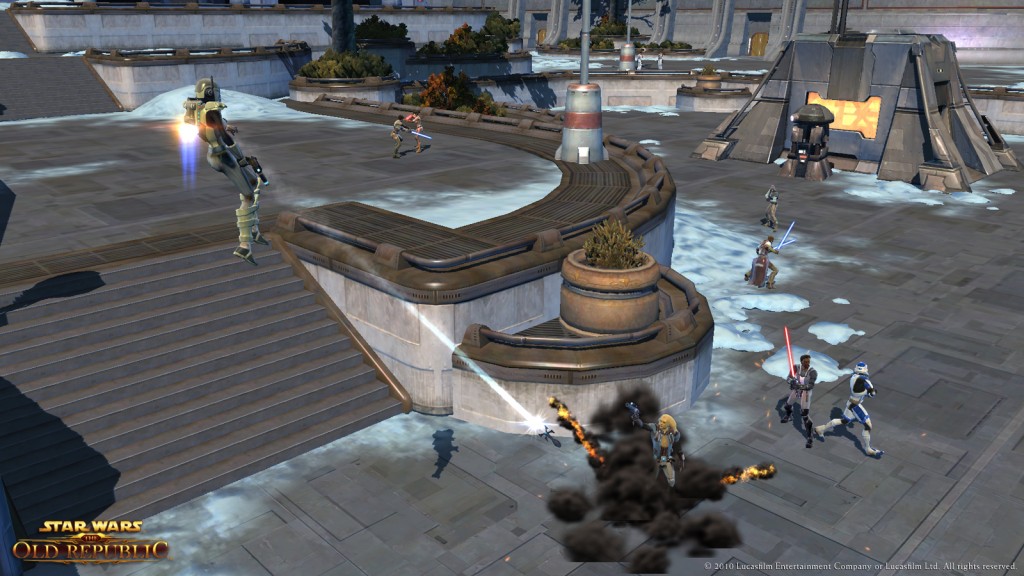 BioWare has placed a great deal of emphasis on the story-driven nature of TOR, calling it their so-called “fourth pillar” of MMORPG gameplay.  In contrast, we actually know very little about the design of the player-versus-player (PvP) systems in TOR. In this article, I will propose two organizational systems which will benefit all PvPers.

More Hopes for PvP and Comments after the jump

Event Driven PvP
BioWare has confirmed that there will be open world PvP.  However, beyond the confirmation of its existence virtually all questions about both the scope and nature of open world PvP remain unanswered.  Unfortunately, I think that there is a strong chance that we can expect an objective-based system not terribly dissimilar to that of World of Warcraft’s (WoW).  In this system, players from opposing factions accomplish tasks that are similar to those found in WoW‘s battlegrounds. Sadly, this sort of system is fatally flawed.  Even though it is “open world PvP” nothing about its open world existence particularly enhances it.  In other games where open world PvP is a central feature, such as EVE Online or Darkfall Online, there are features of the environment external to just the combat which make their implementation of open world PvP meaningful.  In EVE, player corporations (guilds) battle each other for control of entire solar systems and the manufacturing resources contained therein.  Since battles often span entire regions of space the strategy that corporations must employ is altogether different than if they were fighting on just a tactical level.  Similarly, in Darkfall, guilds fight for both player and computer-made cities as well as entire regions of land.  Sieges against cities last for hours instead of minutes, and losing the battle could mean giving up large swathes of land.  In the case of both EVE and Darkfall open world PvP is exciting because they are unforced engagement with large scopes and consequences.  By contrast, in the case of the aforementioned WoW system, there is no advantage to open world PvP over instanced PvP such as arenas or battlegrounds.  Furthermore, it is much more difficult to obtain a consistently enjoyable gaming experience in WoW type systems because sometimes there are simply not enough people playing!  At least during instanced PvP the matchmaking system ensures that the teams are numerically even and that you even have enough people for a match.

The design challenge of open world PvP seems to be that it is often devoid of meaning or consequence for the players involved.  As such, instead of using an outdated WoW-esque system for open world PvP, BioWare should make open world PvP meaningful by calling upon several of TOR‘s central design premises. From the beginning the developers at BioWare have stated that they want TOR to be very epic and very much a Star Wars game.  With respect to open world PvP one of the best ways to do this would be to have periodic (perhaps weekly or bi-weekly) open world PvP events.  Obviously, these sort of events would have to be repeated as designing new events every single week is completely unfeasible.  Nonetheless, there is a simple way to keep them fresh, exciting and unpredictable:  involve game masters (GM) and/or developers.  Imagine for instance, the Empire assaulting a Republic base led by GM coordinated assault vehicles whilst players from both sides clashed.  Such events would be exciting for the players because something different would happen every week even if the venue did not always change.  Their relative infrequency would also ensure that they were a meaningful and an economically viable option for BioWare (after all, GMs have to get paid).  There are, of course, many design considerations to take into account such as overcrowding, what sorts of things the GMs can control and how they control them, etc.  With a little effort all of these problems could be overcome.  More importantly, the implementation of such a system would be in line with BioWare’s design goals in TOR:  epic Star Wars-ness.

I know that some readers will immediately wonder why we would want GMs running this type of event rather than players.  The first and most obvious reason is that such a system has a huge potential for abuse and/or extreme negligence.  A malicious commander (or one who simply has to leave his or her computer unexpectedly) would ruin the experience for both sides.  In addition to abuse, designing a user friendly interface for such a system would be time consuming and costly.  It would be much better for BioWare to design a more rudimentary system that GMs could use.  GMs (presumably) are more tech savvy than the average video game player and as such would have no problems dealing with a less user friendly interface such as one based off of console commands.  While some players would undoubtedly be able to handle that sort of interface, many, if not most, would not.

The ELO System
Another important aspect of PvP which has not been addressed is the possibility of a ratings or rankings system for players.  For the purposes of this article, when I speak of a ratings or ranking system, I mean two very different things.  In a ratings system players are assigned a value based upon their strength relative to other players.  Rankings on the other hand assign a rank which exists in a vacuum, independent of other players’ relative skill.  For instance, let us say that it takes one-hundred and fifty PvP kills for a player to achieve the rank of “lieutenant.”  Once the rank of lieutenant is earned, that player can never go down in rank, even if they get killed one million times by the opposing faction without ever getting another kill of their own.  By contrast, in a ratings system, points are earned and lost by defeating or being defeated by other players.  The ratings system is a substantially better and more  complete system because it is an accurate measure of a player’s current skill level.  The rankings system is also flawed in that eventually, even a very, very bad player can reach the highest rank if they commit enough time to the task.  This diminishes the accomplishment of having a high rank and inhibits the ability of the computer to construct good matches.

In chess (and now in many other competitive games) the ELO rating system is used to measure players’ relative skill level.  As great as this system is, it is not entirely clear how such a system should be incorporated into an MMORPG such as TOR.  The ELO system was originally designed for chess, which differs primarily from TOR in that chess “teams” consist of only one player per side.  In TOR obviously there are multiple players involved in PvP combat which makes the original ELO system imperfect for the job of PvP rankings.  However, the ELO system has been modified by other game designers via statistical weightings to account for the unique features of their respective of games.  BioWare could incorporate such ratings to adjust for players being outnumbered, factor in contribution via damage, tanking and healing, etc.  Whatever the specifics of the implementation might be, it is something that BioWare should seriously consider for its benefit to both PvP matchmaking and as a system of advancement for serious PvPers.

Many of BioWare’s design decisions about TOR‘s game systems have been excellent thus far.  We can only hope that this trend continues with regard to TOR‘s PvP.  What do you think of these proposed systems?  Are there any others that you would like to see in TOR?  Let us know in the comments section or on the forums.

7 Responses to “Hopes for PvP”