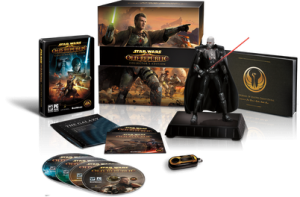 A sound that can be heard around the gaming world: pre-ordering starts, Ray Muzyka talks release window, beta testing weekends in September. Most importantly, pre-ordering will get you early game access.  How early? That depends on when you pre-order — first come, first served.  Don’t delay!

Other exciting news includes an EA press release in which Ray Muzyka talks about a Holiday 2011 release. “We are targeting Star Wars: The Old Republic to be one of the biggest launches of holiday 2011,” he said. This effectively narrows the release window to the last two or three months of 2011, so don’t expect SWTOR before the late fall.

In the same release, BioWare also announced that in September they will have Beta Test Weekends.  “These weekend play sessions will be open to selected players worldwide and create an opportunity for fans to get a sneak peek of the epic stories, worlds, quests, battles and characters in the game,” BioWare says.  These weekends will be open to those who have registered for testing.