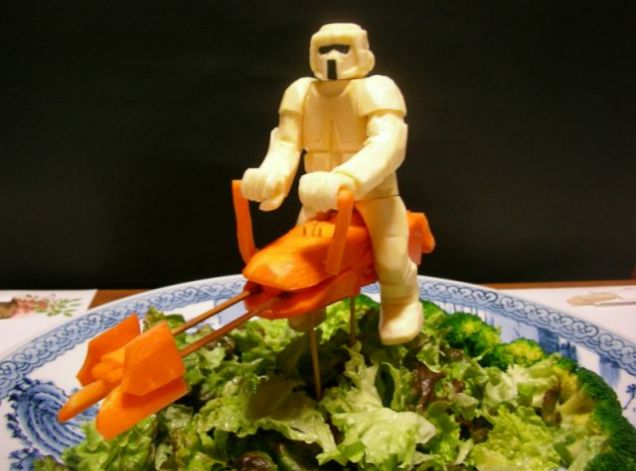 Yes, folks you heard it here…Star Wars Sushi! Shout out to @starwars on Twitter for the link to this story. The chef is genius and obviously a master at his trade not to mention a huge Star Wars fan! Here is one picture, but take some time and check out the rest of the story and images.

More HoloNet Links after the Jump…

This is a really good interview, not too long, with James Olhen being interviewed by Nrama from Newsarama.com. Topics include pre-order sales and pressure for a good launch, companions, progression/leveling and a possible reveal….

“We have some pretty exciting announcements that will be coming. I don’t think there’s anything on the level of PvP, Warzones, space battles or anything like that. Well, there’s one thing that might be at that level. Depends on what you like about the game, but it’s pretty exciting. Obviously I can’t go more into that, PR will kill me.” James Olhen newsarama.com

I’m wondering how does one play a neutral alignment character when in situations like these you would either gain light or dark side points, no neutral option. Does that mean that if I want to be “grey” I have to be careful to balance my answers with both light and dark side so they’ll cancel each other out?

The situation given to you in this case really only had two options. As such, being neutral is impossible. While some quests in the game may give you a ‘uh, I’m not going to get involved, I’ll stay neutral’ option (often dubbed the ‘I don’t want to take sides’ or ‘I don’t want to make a decision’), in the grand scheme of things that’s not a really viable option for the majority of quests. If it were, the neutral option would be ‘refuse quest’.

In short: Neutral choices rarely make for interesting choices or interesting gameplay, which is why they don’t exist on every quest, only once where it makes sense.

The game tracks both your light and dark side choices. Once a quest is completed, these choices are locked in final, forever. You can never ‘reduce’ the dark side influence your character has built up, you can only try to balance it out with light side choices.

So, short: Yes, you can play neutral, but in the context this game that would mean making per case choices in quest, trying to do both of light or dark choices of similar magnitude.

DavidBass General Discussion -> How Do You Feel About No Surnames in TOR?

The actual answer James gave was “We have no answer at this time.” As in, “We can’t talk about that right now.” We have a reason for why we aren’t answering any questions about surnames, though I can’t share any details just yet.

StephenReid General Discussion -> “Every Player gets a Bag of Rewards”

Could a Yellow Poster confirm or deny this? Coz if this is true, i am a happy bunny. Raiding for the fun of it instead of grinding the instance to death because i need one item? That would be awsome !

‘Loot containers’ (name is still a work in progress!) do indeed exist and are designed to alleviate the frustration some feel around high-level loot drops.

As it’s currently implemented, at the end of a key encounter within an Operation, upon looting a high-level opponent, everyone in the Operations group will get an individual container which has a chance to give you a random piece of loot that’s specific to your class. It could be part of an armor set, a weapon, and so on. If you don’t get loot, you’ll get commendations which can be used to purchase gear. Please note, this feature is currently in Game Testing and may well be modified before launch.

Looks like being a grey or neutral style player might be sort of difficult. Hmm also looks like they are up to something with surnames…time will tell. Soapbox time about loot containers, I think this is a great idea. Players will spend less time worried about ninja looters or raiding drama about who got what item. Okay enough soapbox time, let us know what you think below in comment section or join our forums here at CRR.

TORMAG is a new online magazine soon to be released, August 5th. Mark your calendars now.

Shout to TORWars @WeeMadAggie for her write up and link to TORMAG. Make sure to check out her article for the full write up.  TORMAG: First SWTOR Virtual magazine

Wish there was a live TV show dedicated to Star Wars: The Old Republic? Check out Gamebreaker.TV every Monday at 6pm PST for the live show, The Republic.

Are you wondering if your computer can run Star Wars: The Old Republic? Have no fear I have the website link for you. The site is called Can You Run It? There are two windows one to type the game you are searching for or another using their pull down window. It scans and then shows how your PC measures up. Give it a try and have your PC ready for release!

Can You Run It?

Miss an article from earlier in the week? HoloNet Links has you covered.

Are you looking forward to playing Warzones in The Old Republic?

How many of you like PVP? I’m sure there are some of you just itching to takedown someone from the other faction. Personally, I’m not a huge PVP player (hardcore gamers insert laugh here) BUT, I am actually looking forward to playing SWTOR’s Warzones. There is more of a story element to them and it just feels like being a part of an epic battle you might see in the films. I know that I will die…alot, and probably rather quickly, but at least while getting pwned(did I say that right? lol) I will feel like I’m part of the story. Yes, private Dead-Meat reporting for Warzones!

This week’s video fun is a two parter. First one is a funny video submitted by HereticZero on the CRR forums.

The second part is to mention FTW Broadcasting. This Youtube channel is just amazing and full of SWTOR yummy goodness. If you are looking for funny you can find it, but they also do some just mindblowing walkthrough videos. I will be featuring some of their videos from time to time.

That’s all this week from the HoloNet Links at Corellian Run Radio. If you have an interesting, funny, or thought provoking Star Wars Old Republic link, please let me know via email jason@corellianrun.com, join the CRR forums, or in the Facebook group. See you next week.