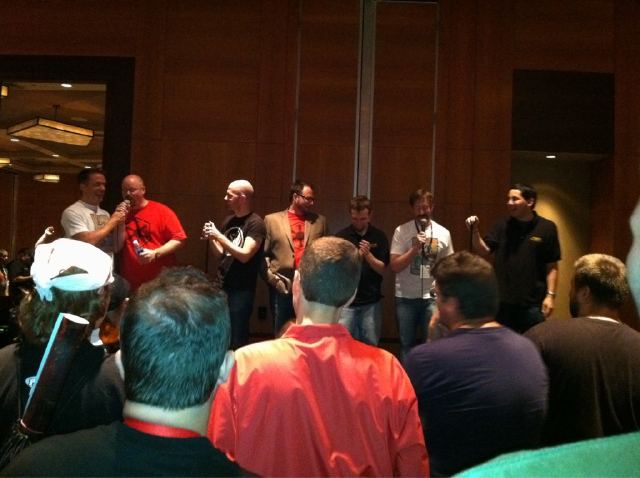 Meet and greet with Bioware was held last night, August 27th. After everyone got through the line to get into the Hyatt, the location for the meet & greet, the event started off with a Q&A session with several from the team helping bring Star Wars: The Old Republic to life. In attendance were, Blaine Christine, Cory Butler, Rich Vogel, Daniel Erickson, Gabe Amatangelo, Stephen Reid, David Bass and magically appearing, a bit into the event was James Ohlen.

As many Q&A sessions go, there were some questions we already knew the answers, but others we found out some interesting information.

A: Daniel-We’ll be talking about that down the road…fans should be happy.

A: Can’t talk about that yet

A: Not at launch, but on “Wall of Crazy”

I know that there are some very disappointing topics there, and anyone who knows me, knows I am a huge “glass half full” guy. The two glaring ones are no guild banks and the color system for armor/clothing. I am relieved that the guild bank system is their number one priority after launch, but I am very confused why they would not have already had that in the game. The second one, for me, is the color/dye system not being in the game. My reason for wanting it, besides keeping myself looking “pimp,” is because this would give guilds a way to identify themselves. Currently, as far as I know, there is no guild identification, besides probably a floating guild name, above a player’s character. I know the customary tabard would not fit within the Star Wars universe. So what would work for guilds besides an emblem system or the coloring of player’s armor to match others in his or her guild?

What are your thoughts? Maybe more will be answered in today’s press conference and make all of this or most of it all mute point. Let us know in the comments below.