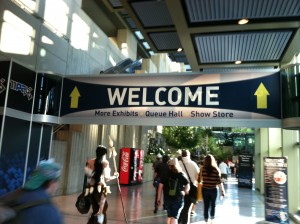 We had a blast at PAX Prime. We got to chat with the devs, hang out with other people who have been following the game, play a little Huttball.  All in all, a very fun weekend. For those hoping for brand new content, the pickings were a little slim, but we did get bits of info here and there that help expand our understanding of the game. The new information has been highlighted in gold.

More Overview info after the jump

Even though I had no idea how my character worked, I still had a blast running around, falling off ramps, getting fried in the fire traps, trying to chase down the ball handler. This game will only get better as people learn their classes and attempt basic strategies to win. Color commentary from Gabe Amatangelo and other BioWare peeps really enhanced the experience. Currently there is no spectator mode for Huttball, but Gabe says the “building blocks are there,” and they are looking into making that happen.