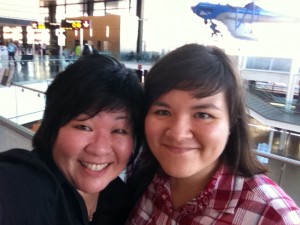 The Journey Begins
Awaking at the crack of dawn has never been my thing, but it’s PAX, so I do it. Why the heck is it still dark outside? This confuses me.

At airport security, I get my first-ever chance to take a stand on the issue of body scanners, but I find that I have no moral rectitude this early sans caffeine, so I meekly subject myself to the scanning process — no complaints about the ratio of cost vs. actual security, no objections to invasion of privacy or the difference between a suspect with probable cause and some poor shmuck who just needs to get somewhere via airplane. I plant my feet in the outlines on the floor and raise my hands over my head, palms forward. I am “participating in security,” as one of the signs says.

More Day 0 and Comments after the jump.

The first leg of my flight goes smoothly and I land at the Dallas/Fort Worth airport. Since I have a couple hours to kill before Roxanne’s flight arrives, I take refuge in the Blue Mesa Grill, a cute little taco and tequila bar in the airport. I sit at the bar with my steak rellenos tacos and a Sierra Nevada. I Tweet about it. On a tarmac far, far away, Roxanne is stranded, one flight delay away from her very own tacos and beer. When she sees the Tweet later, she is sad.

Fun fact: the Dallas/Fort Worth airport does not have “restrooms,” they have “toilets.” Ahhh, Texas. They call it like they see it — no putting on any euphemistic airs.

Finally, Roxanne and I connect. She has made it just in time to catch the next leg of our journey to Seattle. It is nice that the two of us are winging our way to PAX on the same flight, but it is disappointing that we are sitting nowhere near each other.

I make my way to the back where I see my empty window seat next to two young guys who have the look of gamer geeks. They smile politely and let me in. When I have trouble figuring out how to turn on my reading light, the young fellow next to me helpfully reaches up and pushes the button.

“Thanks,” I say. “Apparently, I don’t know how to read pictures. That lightbulb looked like a person having an extreme hair day.” He laughs. We are fellow travelers and the ice has been broken.

I briefly consider striking up a conversation, but decide against it because he might be weirded out that some Asian lady barely this side of fifty is trying to chat with him about video games. Instead, I go back to not making eye contact and trying not to touch anyone, which is always a good default approach on an airplane. I end up watching Thor, which really does not stand up to a second viewing.

Fun fact: the actor who plays Thor, Chris Hemsworth, is the same actor who played James Kirk’s father at the beginning of the most recent Star Trek movie. I liked him much better as George Kirk, but he took off his shirt more in Thor. I wonder if Daniel Erickson will consent to a shirt-less interview even though David Bass told me it was the lighting and not to get too excited.

Betting is Dumb
The first thing Roxanne and I do when we land in Seattle is take a picture of the two of us with my phone. There is a ridiculous moment when I don’t know how to flip the phone so it will take a picture of us, and Roxanne has to push the right button so we can see ourselves. There is a more ridiculous moment when I’m trying to caption the picture for a Twitter post and I can’t remember who’s on the left and who’s on the right.

“Really. I thought I was on the right.”

I am so sure I am right, I say, “Loser pays for the taxi to the hotel.”

I have a bunch of texts from Carla. She has picked up our media badges and we’re meeting various SWTOR podcasting community members for dinner at 7 pm at the Taphouse Grill. Oh frabjous day, that means we can go to the hotel, check-in, and go straight to the restaurant without worrying about stopping at the convention center. Bless you, Carla. The arranged meeting time is just forty minutes away, so time is of the essence. Roxanne and I try to take Carla’s advice about some downtown shuttle, but asking at the airport results in being sent wandering all over a multi-level parking deck. Just as we are about to give up, we come upon a line of taxis parked at the curb. Time! It’s of the essence! We bail on the Carla Downtown Shuttle option and choose the Probably Way More Expensive Taxi option. Which I am paying for.

This turns out to be the right decision after all because our taxi driver darts in and out of traffic as if he trained in New York city. We make it to the Crowne Plaza in record time. 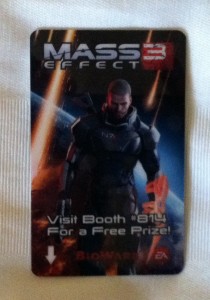 Our very first piece of swag is handed to us at hotel reception: Mass Effect room key cards. Later at the Taphouse, we show them off to everyone and everyone is super jealous. Achievement unlocked!

Eat, Drink, and Pass Out?
There are ten of us: Samm and JJ from TOROcast; Zach, Josh, and Steiny from Mos Eisley Radio; Lethality from Ask A Jedi; Jeff from TORWars; Carla, Carla’s husband Bill, Roxanne, and me. We all squeeze around a large table. Everyone is sincerely happy to see each other. It’s like a reunion of old friends, even though some of us have not met face to face before. 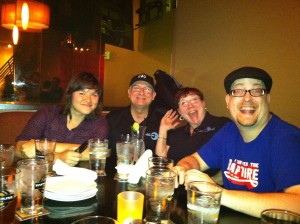 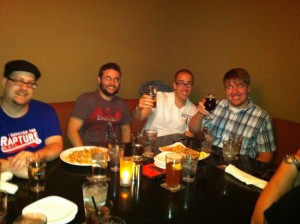 Samm tells us that the Taphouse has great sushi, but I am skeptical.

“Do you mean ‘great’ for brewery sushi, or actually great?” I ask suspiciously. 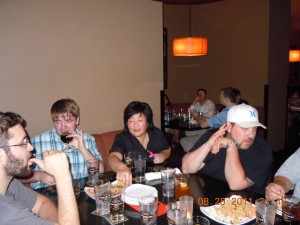 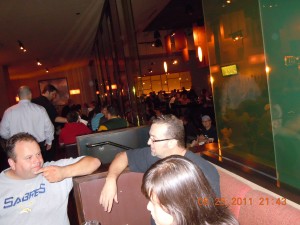 At some point Carla starts going on about how Erick Adams of Trion Worlds is also at the restaurant. We look around for a second. Maybe half a second.

Carla checks her phone. “He says he is in a booth in the back corner.”

“Well, that can’t be right. We’re in a booth in the back corner.”

We start to lose interest and decide he must mean one of the booths way on the other side of the room. Should someone get up and look around? But by now drinks and food have begun to arrive and we wordlessly decide, like a collective Borg entity, that we are more interested in alcohol, sustenance, and each other’s company than we are in Erick Adams of Trion Worlds. The time for reaching out passes and we start talking about Steiny’s vagina glass. 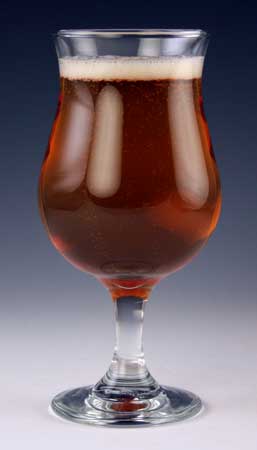 Fun fact: Steiny is a bit of a beer afficianado and he likes to order something called Spaten Optimator, a dark German beer. When he orders it back home, they bring it to him in a mug. The server at the Taphouse brings it to him in a curvy, parfait-type glass with a long stem. I tell Steiny that it looks a little girl-y to me, and Josh immediately dubs it the “vagina glass.” This irritates Steiny enough that he actually asks the server to switch the drink to another, presumably more manly, glass. When the server returns with a less-feminine vessel, the rim is festooned with colorful little plastic monkeys, the Barrel-o-Monkeys kind. I can’t decide if the server is being a smart-ass. Yes, yes, he most assuredly is. Future Me will learn that this is a tulip beer glass and that is perfectly appropriate for Spaten Optimator. Our server is telling us that we are cultural Philistines.

Suddenly, Erick Adams of Trion Worlds materializes at our table. He has been at the booth next to us the whole time, literally about thirty-six inches from my elbow. He’s extremely nice and personable and isn’t at all offended that none of us could be bothered to rotate our upper torsos far enough to look at the next table. We talk about RIFT for a few minutes and I compliment Trion Worlds on the things I have heard about their company’s good community atmosphere. Did I really hear those things? I think so. I hope I seem sincere because I want it to be true. Our first minor celebrity sighting. Achievement unlocked!

Ford, a member of the CRR and Mos Eisley Radio community appears. He has been following our Tweets or our check-ins or some other Big Brother social networky tracker and decided to come say hello. We squeeze him into the booth and I chit-chat with him about TOR.

The evening is going well until Roxanne starts feeling out of it and decides to nearly faint in the middle of the restaurant. It’s rather dramatic because for some reason, when she starts thinking she is going to black out, her brain tells her that the best thing to do is get up from her seat and walk over to my end of the table. Normal Roxanne would have told her that the other time this happened it was due to dehydration coupled with alcoholic consumption, and that she should just drink water and sit tight until she feels better. Normal Roxanne would have reminded her that she hadn’t had anything to drink since tea that morning. But Normal Roxanne is not in charge any longer, Dehydration Roxanne is! Dehydration Roxanne feels the need to take a stroll. And have a seat on the floor, next to some rather alarmed patrons and servers.

After a few minutes, Roxanne starts to feel better and we decide to go back to the hotel. Everyone is super nice, which makes her feel even more embarrassed. Wonderful Jeff Hollis of TORWars gallantly tells us not to worry about the check. I try to make him take sixty dollars, but he refuses. I shove forty at him, which he reluctantly takes.

“That’s not going to be enough,” I tell him. “Let me know tomorrow how much I owe you.”

“Then let me buy you a drink tomorrow night,” I insist.

I would have argued longer, but by now Roxanne is feeling hot to the touch and I’m anxious to get her back to the hotel in case she is getting a fever. She wobbles a little, but after half a block, the water she drank begins to take effect. She stops feeling sick and starts feeling mortified. Hooray, Dehydration Roxanne has been vanquished!

Later, Zach is the only one who checks up on her. He asks via text message, “Is Roxanne ok?” Awww, Zach, one of the nicest people on the planet.