Yes, yes, I know we want more, but let’s look at all we got and more, as we get into this week’s Post PAX Prime HoloNet Links…be sure to check out special event for September 1st, in first segment!!

More from PAX Prime and the Community after the Jump…

The link above gives you all the details. Check it out and voice your questions.

The ball is not a hologram, it’s a… well, explosive device encased in a shell of uranium (very heavy material) that is being held afloat by a force field.

Why is it explosive you may ask? In earlier versions of the Huttball rules, the Hutt got greatly displeased with the fact that some teams liked to hide and turtle extensively in their own back field. And so he had a little safety added to the ball. When the Hutt gets greatly displeased by the lack of action, he can now create some action himself by hitting that remote detonator button…

This is not a bad thing. It requires the team to work together to protect the ball carrier and set up pass plays etc. Many stated after playing Huttball, that if a team had players caught up in just going after and killing the opponents, that team generally lost. Huttball seems to require teamwork and this is why, I believe it can be an E-Sport in the future. What do you think? Do you see Huttball being an E-Sport? Do you like the ball carrier pace slowed? Let us know your feelings down below in the comment.

Just to limit the speculation a bit (I know, it’s futile )

Until we have a developer blog or some in depth feature on our website, the details of systems like these may still change up to launch. We have very agile development processes that allows us to execute and validate even large scale changes with relative ease and we’re surely making use of that

Mods on items is one of the systems we’re going to tune until right up to ship. It has quite a few implications in regards to in game enconomy, crafting, the Galactic Trade Network and combat and we want to make sure that it all fits together.

What that means is that you can expect changes in the way this works based on what we’re seeing in testing. Already, our internal versions are quite different compared to what is in testing.

That’s why you’re seeing statements that may seem contradictory from time to time. It’s surprisingly hard to always stay on top of what is being tested externally, internally and what is in the current game developers are working on their machines with, especially if during convention season.

That said, yes, there are mods in the game, yes, you can mod items and yes, modded items can stay relevant over very long periods of time.

This was also reinforced at PAX. You can keep your favorite robe or armor and mod it as you level up. It was stated during PAX, you could possibly get Tusken Raider armor and mod it out to go raiding. That said, as Georg Zoller stated, if testing comes back bad on this system, it might change before launch.

GeorgZoeller General Discussion -> Will They Be Under NDA

Yes, they will be under NDA.

This statement is for all Beta testers, you are under the NDA. Do not be stupid and waste your opportunity being a Beta tester, by sharing information that breaks the NDA and gets you kicked out of Beta.

First, thanks to Keondo for sending me a PM on this. Looking through the article, I find the wording quite confusing. I blame the misquotes on a) my thick accent, b) the general background clamor that made it hard for the journalist to hear anything and c) everyone was dead tired by the time we sat down to do this interview.

You do NOT queue for Open World PVP. That would make it… not very open.

“and we give you valor, which are unique skills that are administered in PvP and are not linked leveling in any way, but just how well you are doing in PvP”
Should read: “and we give valor, which is a unique thing that is…”.

Let me know if anything else seems confusing.

This was a response and clarification to an interview in which questions about Open World PVP came up. Thanks to Emmanuel for clearing that up. Here is also a link to the interview if you want to check it out for yourself.

Busy with work, or enjoying the last days of Summer or maybe you were unfortunately impacted by Hurricane Irene, and you missed one of this past week’s stories…well we have you covered with the following links.

8/30 Roxanne on TORWars Interview by Kathy 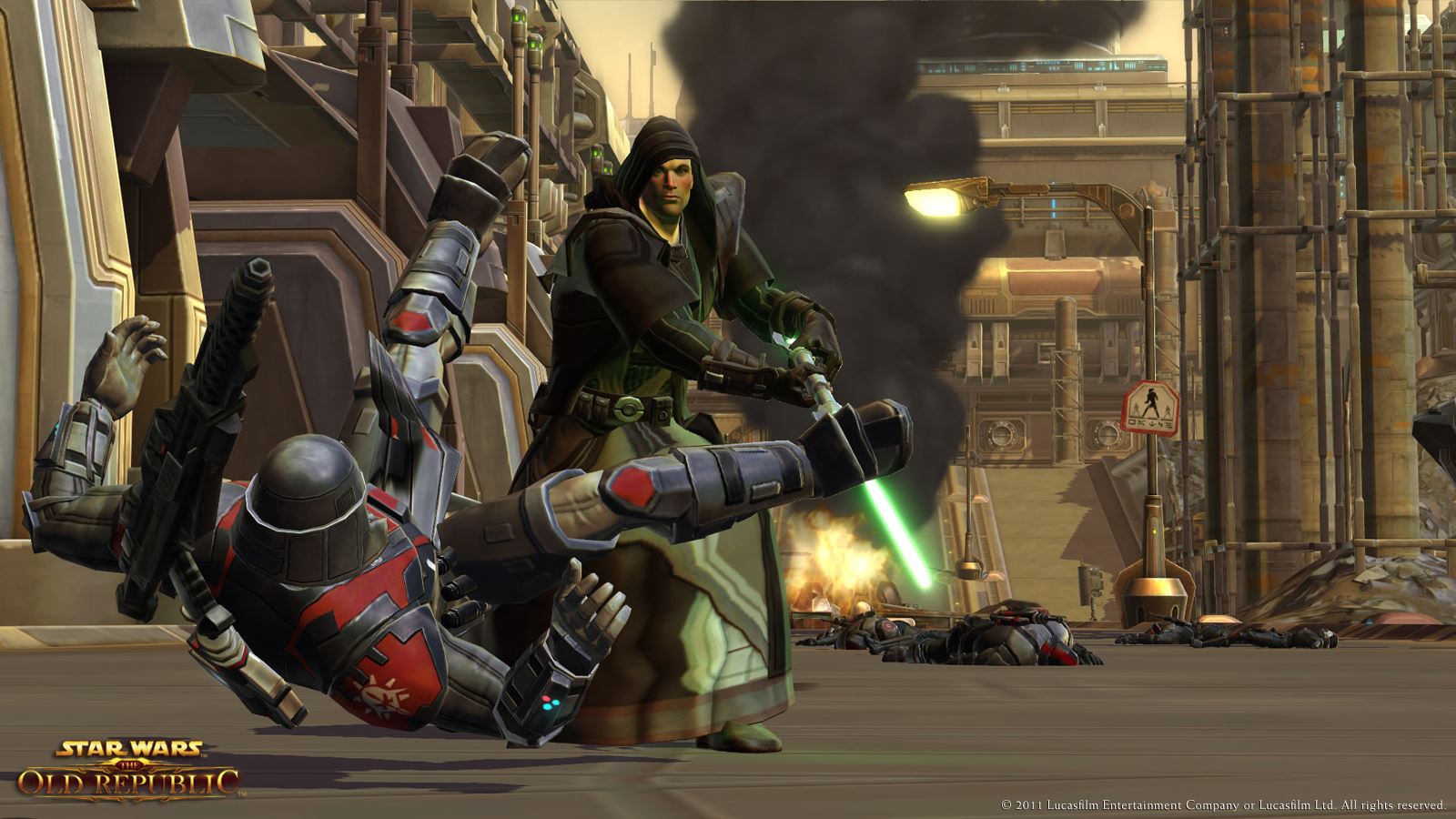 Another image showing off the Jedi Shadow, looks like this is one Jedi not to be taken lightly.

George Lucas is making changes to the original trilogy in the new Blu-ray set. The major one I have seen is from Return of the Jedi. As the Emperor is killing Luke with Force Lighting, Vader now is says no, before and as he throws the Emperor over the railing. See the below video of the new version. It is one thing to clean up the original trilogy & add some cgi to space battles, even to the lightsaber effects, but for the sake of your fans Lucas…STOP adding and editing the Star Wars films we all love!

Here is a small part from his latest edition, Taris part 5.

“My name is Alten and this is my wife and daughter. We were captured by these pirates shortly after we arrived on Taris. We are traders, or we were anyway. All is lost now. These pirates stole all of our supplies and plan on selling us into slavery.”

“Listen, my name is Dimbo. I’m a member of the Republic armed forces. My friend Zotta and I are going to get you out of here.”

Zotta walked over to cell drew his lightsaber and cut through the lock.

Here is a small exert from her latest addition, Taris part 22.

Bekka gave me a sickeningly sweet smile. “I knew you’d see it my way. I have never met a Mandalorian that could resist a challenge.”

“Well, I am so glad I haven’t disappointed you.”
I took a few steps forward. “Lets get this over with.”

Both of these fan fiction writers do some amazing work. I would strongly urge you to go check them out and subscribe to their blogs. Maybe some of you will get those creative juices flowing and start your own stories. If you do please let us know here at Corellian Run Radio. We would love to read and even pass it along to the other members of the SWTOR Community.

Another HoloNet Links has come to a close. Best to all those who got an invite to testing this weekend. To all those who didn’t, there is always next weekend and the weekend after that. I do want to thank everyone for checking out the article. I urge you to take some time, look at the links and then let us know in the comments below what you think or if you have a link or site we should highlight please let me know in the comments below or email me at jason@corellianrun.com. Until next time, check off each day as one more closer to release!

Okay so I lied. Here is a little more for you all. Just some awesome eye candy, from the guys at Mos Eisley Radio and their video series Open Bounty. I love the 8 bit game music used. This one is from PAX Prime and even some really nice interview segments with James Ohlen. Enjoy!