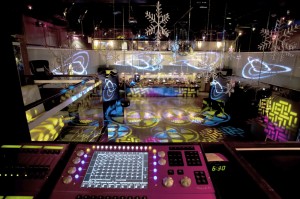 The official BioWare Meet & Greet kicked off the New York Comic Con weekend in style with a host of dedicated SWTOR fans making their way to District 36, a New York City nightclub in the garment district. We arrived about forty minutes early and by prior arrangement, totally reversed our earlier Sith or Jedi stance on line jumping by joining Jeff and Dierdre Hollis (TORWars) near the first third of the line.

More NYCC Meet & Greet and Comments after the jump.

We felt even more guilty after finding out that the people at the front of the line had been there since 9:00 am. We hope Stephen Reid gave them beta access because THAT’S dedication.

David Bass roamed up and down the line, full of helpful and friendly energy. He has the gift of making you feel like you’re just the person he has been waiting all day to see, which is a valuable asset in a community manager.

A very wide man with a booming voice told us to shut the eff up so he could make his announcement about proper ID. When the noise continued, he shouldered his way toward the end of the line, his stony bouncer gaze zeroing in on the unruly members of the crowd. Dierdre looked a bit worriedly for Jeff because she suspected that it was her husband creating the ruckus as he videotaped people waiting to get into the club (she was right).

Stephen Reid greeted us at the top of the stairs with a hug. When I asked if it felt like the end of the line was approaching, he all but rolled his eyes, and said, “Nowhere near.” Thank goodness we have a release date, or I would be forced to speculate on the possibility of a 2012 launch.

A few feet from the bar – our first stop — Daniel Erickson stood under a halogen spot, bathed in an almost holy light as he held court with a small circle of eager fans. As the evening continued, this circle got bigger and bigger as more people tossed out their questions and leaned forward to hear Daniel’s thoughts.

Fun Fact: Daniel first started working at EA on an NBA video game (basketball RPG, anyone?) even though he really didn’t know much about basketball.

Fun Fact 2: one of the current SWTOR writers volunteered that she had once written a story about Darth Malek meeting Tori Amos, and got hired anyway.

Fun Fact 3: Coming off of Dragon Age: Origins, Daniel started writing SWTOR content that was so dark that a lot of his story elements had to be removed to be more Star Wars universe-friendly. To this day he is surprised that a quest involving making people run a minefield for sport is still in the game.

Fun Fact 4: Daniel gets both sides of the Mako’s interchangeable race debate, but in general falls on the side of Star-Wars-Is-a-Post-Racial-Universe side. He does say that in the hypothetical situation of a player changing Mako to look Caucasian and then meeting Mako’s Asian-looking parents, the player just has to deal with the disconnect since that was the writer’s original intent. He also related a story about how people were unhappy that an apparently Black NPC did not “sound” Black…only to find out later that the voice actor actually was Black, he just happened also to be British.

Fun Fact 5: We won’t be tossing aside our companions after moving on to new content post-level fifty. The old ones will stay with you.

Fun Fact 6: Daniel Erickson is probably the only person who has played absolutely every second of written content in SWTOR – that means every syllable spoken by every character and NPC. If you hear it in the game, Daniel has reviewed it.

Conscious that other people wanted to be part of the Daniel Erickson enclave, we withdrew for more alcohol and conversation with other fans and fansites.

Thanks to Daniel for being so affable and talkative even after a full day of talking to the press at the EA event earlier that day. Thanks to David for bringing Daniel drinks (pineapple juice with a maraschino cherry — “It’s a good year for cherries.”) so he could keep talking to the fans without breaking away. Shout-outs to Virtek and gaou from our forums community, Darth Hater producer Josh for the discussion about vodcasts, Allan from OTG, Jaro from Jen’Jidai, and the many other folk we talked to but whose names we can’t remember. Special thanks to Virtek and Stu for walking us to the train station after the meet and greet. Chivalry lives on!