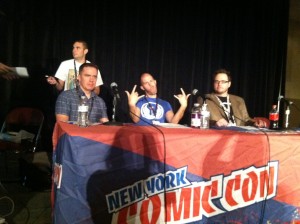 Daniel has done way too many of these panels and does what he can to keep himself mentally engaged with the process.

Our first day at New York Comic Con! We arrive not at the crack of dawn, which means that even though we make a beeline for the Hallmark Booth, the Collectible R2 ornaments are already sold out. We are told that you have to come right when they open. Probably not happening since we have a two-hour commute in every day via NJ Transit.

More NYCC: Friday and Pics after the jump.

First things first, we find the SWTOR booth and observe that the line seems very manageable, even though the con has been open for a couple hours already. We catch a glimpse of Brandon Miletta and make him stop helping Stephen Reid set up for the next group of fans long enough to pose for his NYCC glamour shot. 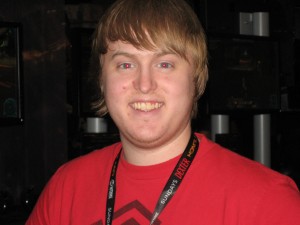 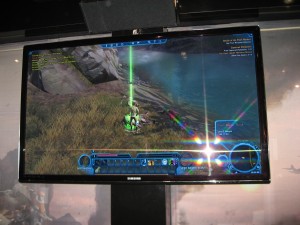 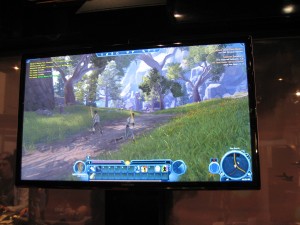 While waiting for the first panel to begin, we run into the TORWars crew and exchange personal details about how we don’t live in Florida and how Jeff grew up in a neighborhood without indoor plumbing. Can you say “outhouses?” Also, Dierdre is a California girl who things California is kinda bleh. Had a great time chatting with several different SWTOR fans, some of whom had even heard of us. Jeff finds the whole experience so unfamiliar that it takes him a few minutes to realize that Grant from Force Academy wants to have his picture taken with TORWars. Jeff is leaning awkwardly in his seat to stay out of frame. “Jeff,” I whisper urgently, “I think he wants you in the picture. TURN YOUR CHAIR AROUND.”

The panel itself had some very nice visuals, including Cory Butler as a Wookie and, of course, the brand new trailer, Signs of War. In attendance: James Ohlen, Cory Butler, Daniel Erickson, Stephen Reid, and a shy Drew Karpyshyn. The most fun was probably when Stephen Reid had us pretend that we didn’t know the release date yet and asked that when the end of the trailer showed the launch day date, we all cheer and go crazy, American-style. We did our best to comply.

The second panel of the day was hosted by MMORPG.com and featured James, Cory, Daniel, and Stephen again. For the most part, the fans did a good job asking interesting and relevant questions. When someone tried to ask a question based on leaked information, Stephen Reid performed a mini-smackdown, which the rest of the panel immediately tried to smooth over by rambling on about class balance and assurances that smart people are working on the game.

Please check out our live Tweet recaps of both panels here and here. 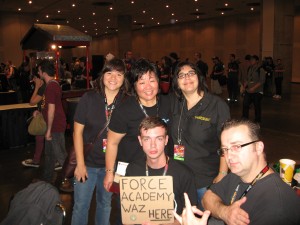 CRR and TORWars with Grant from Force Academy 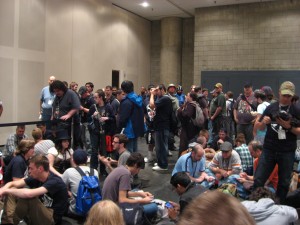 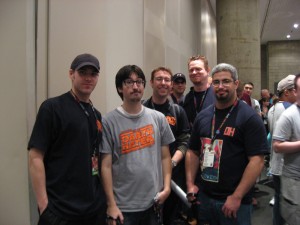 The Darth Hater Crew, at the front of the line. 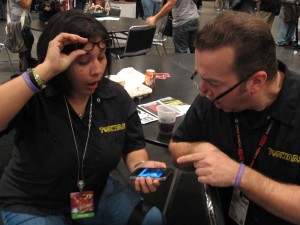 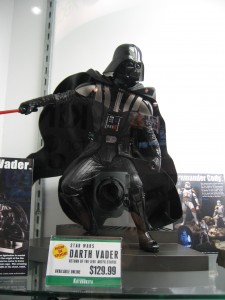 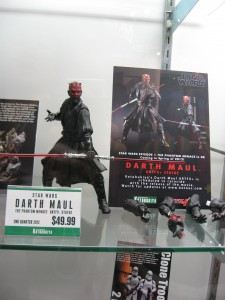 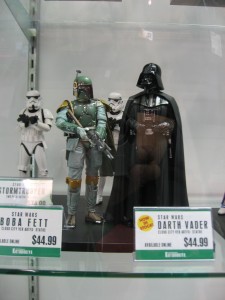 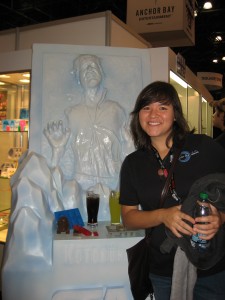 Roxanne with Poor Han, who suffers for the sake of whimsical ice cube trays.