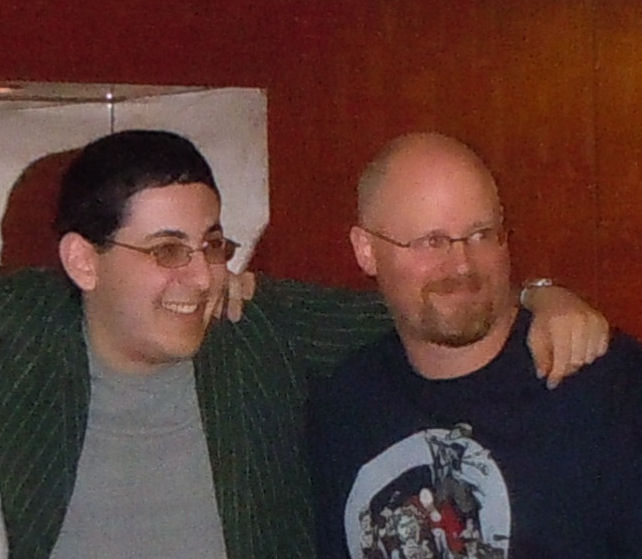 We got a chance to chat with David Bass, Senior Community Coordinator for Star Wars: The Old Republic, about New York Comic Con, lack of a dungeon finder, weekend testing, the NDA.

CRR: We’re at New York Comic Con. Is this your first time at NYCC?

More David Bass and Comments after the jump.

CRR: So has it been fun? What made you decide to come here this year?

DB:  It’s been awesome. I’ve worked for other companies before and this is my first official year on Star Wars: The Old Republic – and Stephen too – and we’ve been pushing to go to NYCC because it’s such a big show. We obviously go to San Diego Comic Con every year and this show is almost the same size, if not bigger, at this point as San Diego is.  And they still have room to expand. Plus, we never really get to go to the East Coast much. The only show is PAX East, so this is our last chance to do a show for the year, good chance to go to the East Coast, right to the center of everything. I miss home too. This is where I’m from. Jersey’s home, originally. It’s a good excuse to get back here.

CRR: Stephen Reid tried to keep expectations low, but I felt like we had some nice reveals, mini-reveals like the number of flashpoints, all that kind of thing. One of the things that I thought was interesting was the no dungeon finder [reveal]. For some reason I thought it was in, but I guess it’s not. What was the philosophy behind that decision?

DB: Well, it’s something that Georg [Zoeller] had talked about awhile ago on the forums when people brought it up. Dungeon finder is a great tool for people who want to jump into everything, but it really hurts that sense of community you get on a server because no one’s ever really talking to each other, trying to coordinate things. You don’t really get to know people as well on your server and we really want those servers to form those communities. We want people to know who each other are. We want people to see each other in town and go, “Oh man, I ran that dungeon with you that one time, that was awesome! Let’s do it again.” And the dungeon finder kind of skips all that. It drops you in with a bunch of people, you do a dungeon, and you’re gone before you even know what happened. So right now, we’ll  have a Looking For Group option, you’ll be able to search for people who are looking for a group. We’ll also have symbols above people’s heads that’ll show if they’re looking for a group. That way you can walk around and you’ll see someone, and you can immediately talk to them and say, “Hey, what are you planning on doing?”

CRR: So you’re trying to encourage people to talk to each other rather than just click a button.

DB: Yeah. It’s really fun if you can be social with people. It makes the experience that much better.

CRR: You just had your second weekend of Weekend Testing. How did that go? What at this point are you actually trying to accomplish or find out?

DB: The second weekend went really smoothly. The first one we had a bunch of issues with the invites going out, which was kind of rough. The second weekend we didn’t have any of those problems. Servers, in general, were very stable. What we’ve been doing with the first couple ones, we’re doing what we call a launch simulation internally. What happens when we open up the services to this many people at once? They all flood to the server, they all get to the same origin worlds at once – what happens? It’s something you’ve got to keep an eye on because everyone’s very focused on what is going to happen Day 1. We all know how many MMOs launched and had a terrible Day 1. And that really, really hurts them. Some MMOs manage to bounce back from that, but it really does hurt you on Day 1 if you’re not ready. That’s why we’re doing the limited launch where we only have a certain number of copies available at launch. That’s why you have to pre-order the game early. That’s why we’re doing early access staggered. Based on when you redeem your code, we’re letting people in. We’re not going to let everyone jump in at once because it’s just not going to work, it never does, there’s no way you can prepare for that.

So instead we do a gradual roll-in and that’s what we did with this one. We did drop everyone in to say, “OK what would happen in the worst case,” because then we can scale back from there and see what happens. That’s why we mentioned the zones are instanced so that way there’s a limit to how many people can be in each zone before a different version of that one spins up. That’s something you see a lot of at launch when everybody’s all in there, in the origin worlds. You’re going to have a ton of instances, but as time goes on, as people progress past them, you’re going to have less and less until the point where we don’t actually need instances at all for the zones. So that’s something we were testing out to make sure the zoning all works properly, make sure that if people want to group up with other people they can find each other, they can find out how to change instances so they can meet up with each other.

CRR: So is this the kind of thing where you could be questing in the same area and you’re trying to meet someone and say, “Let’s get together to do this quest,” and you’ll arrive at X taxi system and you won’t be able to see each other?

DB: It is possible, but once you actually, physically join a group with someone else, it’ll ask if you guys want to go to the same instance and it’ll bring you both together. So you won’t have that issue once you’re in a group. The chat is across everyone no matter what instance they’re in so you can talk to them and say, “Hey, do you want to join?” If someone says, “yes,” you invite them and it brings them over to you.

CRR: And hopefully the instances will be used less as the crowds go down.

DB: Exactly. As soon as we can handle it without it, we’re going to get rid of it.

DB: Yes! And they’re getting way bigger. This test was bigger than the last one. I don’t know exactly how much bigger, but each one is going to get gradually bigger and bigger.

CRR: The people who are in testing now have to comply with the NDA. Do you have any plans of dropping that before launch?

CRR: Tell me, what are the reasons to keep an NDA going at this point?

DB: The NDA’s just a good way for us to hold onto things. Things are constantly changing. And we’ve seen, everybody’s seen, that people tend to get a little freaked out when they find out about something that’s going on in the game. Obviously, we know there are leaks out there. People read something and they freak out about something that’s going on and we have to explain over and over again: things are still up in the air, things are going to be tested right until launch, even past launch we’re going to be changing things based on feedback. The item modification system was a good example. Recently people heard something and they were really upset about the way it worked, and finally we had to step onto the forums and be, like, “Guys, the system that you think you might know about, is nothing like the system we’re actually making. Things change based on feedback, so don’t worry about it.”

So the NDA is the reason to hold onto that stuff until we’re actually ready to talk about something. We’ve always said that we only want to talk about stuff once it’s final. This is the reason. People have shown us time and again that that’s why. We don’t want to upset people by showing them a system that’s half-finished. We want to show them the completed one and then hear what their feedback is.

CRR: So we have the release date, you’ve told us a lot about everything. Are there any big surprises or is it just filling in the holes at this point?

DB: I don’t know! Trying to think….there’s always more stuff. This game is so big that I always forget about certain things. Well, we did tease another operation, I believe. I’m sure we’ll have more information on that someday.

CRR: How about post-launch? Friday updates – is that the kind of thing you might keep going after the game has gone live?

DB: Someone else just asked me that question too. I don’t actually know our content schedule post-launch. Obviously, we’re working on a lot of stuff. We are going to continue to do regular updates. We have said in the past that Friday Updates might be something we don’t continue forever. It just might not make sense in a post-launch scenario. We’ll still have regular updates, I’m sure they will be very, very regular, both patch-wise and in terms of new content on the website. We’ve got Timelines we’d love to get back to someday. Are they still going to be weekly? We’ll see.

CRR: All right, David Bass, thank you very much for talking with us, it’s been a great show.