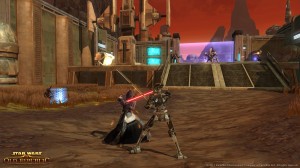 The embargo has officially been lifted! For some time now, various representatives of the gaming press have been playing Star Wars: The Old Republic. Today they are allowed to give their general impressions of early-level gameplay. Keep an eye on this space to see the whos, the whats, and the wheres.

1up: “SWTOR is WoW with Lightsabers and It’s Amazing”

More Press Hands-On and Comments after the jump…

Massively
Jef Reahard (“I have really high standards and I’m super well-read so it’s pretty much impossible to satisfy me.”) and Larry Everett (“Consular bored me, Smuggler so amazing I played against my will.”) give hands-on gameplay impressions

RPGFan: SWTOR reviewed through the lens of its predecessors (KOTOR, WoW).