Time again for another Guild Checkpoint. This week we look in on a Republic guild that has been active in many games and is really looking forward to Star Wars: The Old Republic. We talk with their guild leader, James and learn why White Lotus is not a guild? Hmm so what are they? Let’s get to the bottom of White Lotus and find out all about this band of Republic fighters. 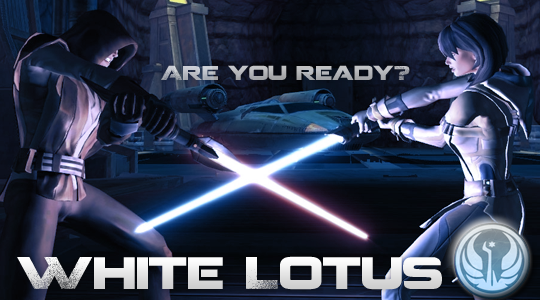 How did White Lotus get started and what was the first game you all played together as a guild?

Oh the memories, White Lotus was actually “officially” formed around 2006. We went by other aliases beforehand but stuck to one name throughout. Most of the veterans got their start in the guild with Guild Wars. We enjoyed each other’s company a ton and decided to keep moving from game to game ever since!

How did the name White Lotus come about being used as the guild name?

Funny story, the name actually came from an episode of Avatar: The Last Airbender watched by a guildie. We were formally known as Sanctuary but wanted to switch our name around late 2006 due to a large number of guilds went under the same alias. A large group of us at the time found the name to be really cool!

The guild refers to itself as a community, what does White Lotus mean by that? How does the guild promote and help maintain community?

White Lotus isn’t just a guild. It’s a community of friends or gamers where they can meet new friends. We want everyone to form solid bonds of friendship, sometimes even relationships brew, throughout our gaming. The guild does a wide variety of things to help make this a centerfold within our community. We host real events that get you up and moving in real life such as scavenger hunts, cafe meetings, guild meet and greets, or a day hanging out at the mall with other guildies. I personally have visited many of our guildies and spent time with them in Alabama, South Carolina, California and even New York.

White Lotus isn’t just a guild. It’s a community of friends or gamers where they can meet new friends.

White Lotus has been involved in several MMOs, how will this help the guild in Star Wars: The Old Republic?

Experience is probably one of our best traits right now. We have recruited a ton of new recruits who are completely new to MMOs. They are able to ask questions, receiving great advice from our veterans and officers. I believe this will help everyone function more collectively as a group bringing up the newcomers to speed with the standard MMO 101.

How big is White Lotus? Are there requirements that members need to meet in order to maintain their membership?

White Lotus is a multi-game guild that has around 80 members. For TOR, we have around 40 members right now ready to throw down against the Empire. There are only a few requirements for this guild. Ventrilo utilization is a top priority while trying to apply for our guild. I place voice communication very high on the list considering it’s an essential part of any guild in my belief. Other than that, an applicant would just have to have a great all around personality about them. 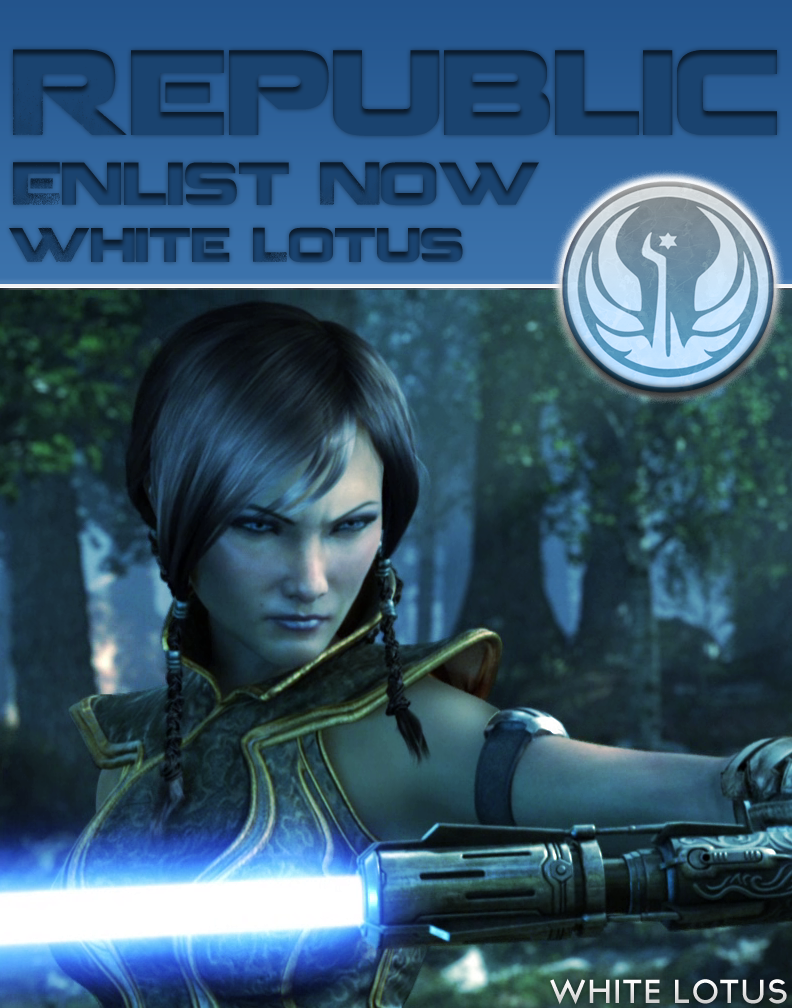 White Lotus has re-opened recruitment, what is the guild looking for in players and what types of classes is the guild needing?

Our guild is looking for active, social, and friendly members. Even people new to games are invited to come join us! We are currently recruiting all republic classes and roles right now. I wanted to bulk up our roster a bit before getting around launch date to ensure class stability among the guild.

From the answers to class needs, we can see White Lotus is a Republic guild. What type of server, will White Lotus battle the Sith Empire?

We have our eyes set on a PVP server right now. We want to experience the real Star Wars experience, I guess you could say. We want to see a Sith Imperial Agent walking past a guildie and have them duke it out! We do have plans to conduct open world PVP with our adversaries as a guild event for both parties.

What are you personally excited about in Star Wars: The Old Republic? What class will you be playing to start?

I’ve always been an avid Bioware fan ever since KOTOR. Considering its Bioware, I am most excited about the story itself more than anything. I will be playing a Jedi Consular leading into a sage. I will be very similar to the level of “epicness” as shown in the Jedi Consular video for all the empire reading this, bring it on!

How do you think Star Wars: The Old Republic will change MMOs?

I believe it would have a huge impact on future developments of MMOs. TOR’s attention to detail, fully voiced feature, and story might become a new industry standard later down the road.  I’ve always found myself “grinding” in MMOs just to hit max level without a clue of what’s really going on. Bioware seems like they have done something new and great with this franchise and give a deeper level of integration to the point that you actually care about the story or the character you may be helping during the quest.

As guild leader, you look at game mechanics as to how they will impact the guild. Are there any game mechanics, that we are aware of now, that you have concerns?

Quite honestly, I don’t have any grave concerns at the moment about any of the mechanics. Everything seems pretty solid from what I’ve read, heard, and researched about so far. I would like to know what Bioware plans to do with allies/adversaries system in their upcoming patches and expansions though!

How would you classify White Lotus as a guild, casual or hardcore or pvp, or endgame/operations?

We are “casually hardcore.” Some people ask what the heck that means. It means we are fairly hardcore when it comes to endgame/operations, pvp, and the whole leveling progression. Yet, we are more relaxed than most hardcore guilds in terms of atmosphere and regulations. We want to strive to be the best but at our own pace to enjoy the game for what it is….a game.

If someone is interested in being on the Republic and be a part of White Lotus how would they go about joining step by step?

Most definitely! You could easily check out our forums recruitment thread and give a quick read through of the first page (SWTOR recruitment thread). If you believe we would be a great fit, visit our guild website. Just click, apply at the menu towards the top of the webpage. Complete the application and will receive confirmation back with further instructions within 24 hours!

That is the end to another Guild Checkpoint. I want to to thank James for his hard work, and all of the members of White Lotus for letting us in their community to learn more about them. If you are into some PVP/Casual Hardcore on the Republic side, and looking for an Eastern time zone guild, check them out.

Remember, if you would like to have your guild to be highlighted on CRR, please submit your guild’s name and website in an email to me at jason@corellianrun.com. See you all next week!