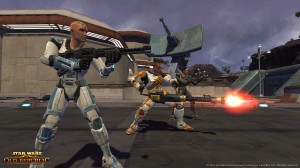 In Game Informer’s “Ten Things You Need to Know About The Old Republic,” Matt Miller gives a comprehensive overview of the game, talking about every major system: classes, companions, story, combat, flashpoints, PvP, and more. For the dedicated SWTOR fan there really isn’t anything new here, but it’s nice to see Game Informer’s positive tone, since they are often tough on games.

More Ten Things You Need to Know and Comments after the jump.On combat:

Battles in The Old Republic have a surprising layer of strategy, even when you’re soloing through quests. While many MMOs task your character to take on one or potentially two enemies at a time, many battles in the new Star Wars MMO have you facing off against 3 to 5 enemies at once. As a result, combat feels dynamic…

MMO players who don’t enjoy the hassle of pet classes may be frustrated by the use of companions, as they do require some small management on your part. That said, companion AI is quite good on its own, and we found that a selection of different companions held their own in combat quite well.

On the Star Wars “feel”:

For many potential fans, all the gameplay features in the world won’t answer one very important question. Does it feel like Star Wars? The short answer is a resounding yes.

Read the full article, “Ten Things You Need to Know About The Old Republic” from this month’s issue of Game Informer. In December four GI editors will relate their experiences in SWTOR testing.