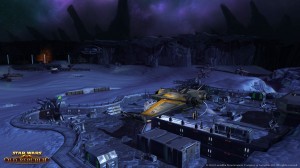 At the Fansite Summit Gabe Amatangelo gave us an extensive look at open-world PvP on Ilum. He narrated a live demo of a lone player working his way through the zone from one control point to the next. What follows is an overview of what we learned from the demo and the Q&A session that followed. Keep in mind that SWTOR is still in testing and certain details may change.

More on Ilum and Comments after the jump.

What is open-world PvP on Ilum?

The open-world PvP area is a huge zone that takes up approximately half of the whole planet. It is a persistent zone that players may enter and exit at any time. Each faction fights to control the zone by controlling specific points in the zone.

Will Ilum be available on PvE servers?

Yes. Ilum is a designated PvP spot available to all players on any kind of server.

What are the rules for winning?

Since battle on Ilum is ongoing, there is no win, there is only controlling the zone…for now. At least from what we understood from the presentation. Players can help their side control the zone by taking and holding all five control points. These five points are arranged more or less vertically from one end of the zone to the other. Successful defending and taking of nodes give players War Effort buffs.

What is a War Effort buff?

Various activities – i.e. successfully defending a node, successfully taking a node – give players a War Effort buff. These buffs stack and give a player an increasing amount of Valor when he kills an enemy player. Ilum War Effort buffs stay in effect even if the player moves to a formal warzone such as Huttball.

What are the five nodes?

How many players can be in the battle area at once?

There is no practical limit to the number of players that can be on the field. “There is a limit, but I don’t imagine people are going to hit it,” Gabe said, while declining to give specific numbers.

Can players group up?

Yes. Players may form groups of up to 24.

What about faction imbalance? Are there any systems in place to make sure one side doesn’t steamroll through the objectives just because it outnumbers the other side?

There are no systems in place to ensure an equal number of players on each side. Anytime you start to introduce controls like that, it stops being open-world PvP. Instead, designers focused on setting up a scenario where imbalance of numbers doesn’t necessarily mean it’s a hopeless cause. The rules of the game dictate that each faction must continually hold all five capture points to be in control of the zone. A smaller faction could concentrate its forces on one node, keeping the other side from being in control. The larger side may not be able to win that last node without drawing forces away from their other nodes, at which point the smaller side could capitalize on the now more weakly-defended node. It’s all about strategy and communication. And of course, there is nothing keeping the weaker faction from putting out the call for more reinforcements in global chat, in guild chat, in the capital cities, etc. For the Empire! For the Republic!

Why would a player want to go to Ilum during the “down” times when most players are either sleeping or carrying on with their daily lives? Is there any reason for a player to enter the open PvP area of Ilum when there isn’t a big battle going on?

Yes. A player can take objectives and get the War Effort buffs. Those buffs, which give more Valor per kill, go with him when he enters a formal warzone.

How do players move around the battle area?

Players can run or ride their personal vehicles.

Check out Ask A Jedi’s audio posting of the Q & A session.