Sith or Jedi? Empire or Republic? Good or evil?

The struggle in Star Wars has always been about good versus evil. Darth Vader opposite of Luke Skywalker in Empire Strikes Back and Return of the Jedi or even more recently Yoda battling Dooku in Attack of the Clones and against Palpatine in Revenge of the Sith. The whole universe created by George Lucas has inspired many people throughout their lives, and the identity of many geeks would not have been established without Star Wars pulling them in.

More Thom’s Thought Transmission and Comments after the jump. 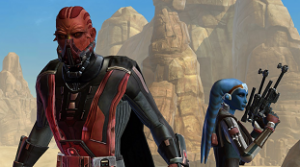 The archetypes of good and evil will also be present in Star Wars: The Old Republic, with most notably Satele Shan and Darth Malgus for the Galactic Republic and the Sith Empire respectively. The division between good and evil non-player characters is (as far as we know it to be) parallel with the Republic and Empire faction, just like it was parallel between the Rebel Alliance and the Galactic Empire in the original trilogy. Yet, Players get to choose for themselves if they want to be good or bad, on either side of the conflict. While choice is good, why is a light side Sith Warrior not a Jedi by default because of this morality choice? Why is an evil Trooper still helping the Republic?

Putting it bluntly, for any character, the dark side is the easier way out. Hypothetically, there is this bad guy from a gang running a slave ring in the underbelly of a large city-planet. You are tasked with dealing with the issue by your superiors. You fight your way past the gang members defending the hideout they are residing in, your companion manages to hack into the security systems so you can go about your business without interruptions. The slaver is cornered by you and you get three choices;

Wait a minute? What have we here? Somehow, we end up with two very distinct dark side choices. While it is clear that #2 is the light side choice to make, it will be hard to decide what to do if you want to make a more evil decision. Maybe if you are into RP, you let your characters backstory guide you towards the choice. If you are a sadistic bastard, you will most likely end up with a dead slaver. If you are a greedy bounty hunter, taking over the slave ring will net a good profit. So, the dark side is not so straight-forward after all.

Choices you make throughout your story matter.

Bioware has stated that decisions that might seem trivial, will reverberate into your later game. They have released a video a while back in which they showed the difference between a light and a dark side choice for the Jedi Knight. You have just defeated a Sith Lord in combat, and because of his embarrassment, he asks you to take his life. You can then choose between taking his life to honor his request, taking his life and relishing the murder, or telling him that there is still chance for redemption. If you actually redeem the Sith, he will become an NPC who you can stumble upon later in the game. I’m not going to give away the story if you have not seen the video here, but I can say that I found the end result of this light side choice very interesting, and it will make my decision strategy for story line quests quite a bit different; there will always be a voice in the back of my head that wants to see what happens if you had only picked the other choice. 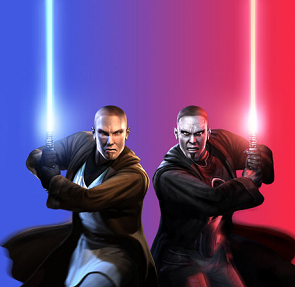 So going back to my original story; why would the light side character favor the Empire, or a dark side the Republic? First, individuality. Not everyone is the same person. Some are inclined to do good, and have a stronger moral compass. Others tend to listen to their inner psychopath a bit more than regular folks. A Trooper who has been in many battles, will be very angered by any Empire affiliates he comes across. And we all know that anger leads to hate. So there can definitely be dark people on the ‘good’ side.

Light side characters in the Empire are also possible. One drive for them might be patriotism. Most members of the Imperial Army in the Old Republic era, are from Dromund Kaas. They have been in a war for a long time, and the cold war situation set during the game only adds to the anti-Republic sentiment. Young men and women alike will fight for their intergalactic nation, and still be good people. They will not necessarily cave to the harshness of moral choices, and an Imperial Agent might be a force of good, furthering the Empire’s plans without making too many casualties.

There is actually going to be a third option in your morality compass; neither light nor dark but the gray side of the force. Staying purely gray is in my opinion the optimal way of enjoying the story. You will not be burdened by having to make a light or dark side choice, but you can always lean a little to one side for a bit and still even out later on.  Having to kill the important quest NPC who you expect to see return later on if she is allowed to live, just because you would otherwise gain light side points, is not a choice you make depending on the story, but purely on your character’s allignment. I’m not saying this is a bad thing, but it will remove depth from your personal story . 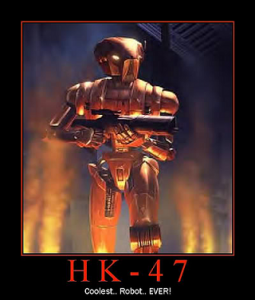 “Commentary: The meatbag speaks without clarity. Detail this agreement or the master will splatter your organs all over the floor.” –HK47

I absolutely loved the HK47 assassination droid you got as a companion in the original KotOR games, but while playing light side he did not like me at all. This is another issue to decide whether the light side choice or the dark side choice will benefit you more; the companion factor. It looks like each of your companions will come with their own moral compass, and their affection towards you will shift depending on your choice of dialogue during quests. If you have a companion as sadistic as HK47 was, and you want him to like you, you are inclined to take the murdering-rampage-killing-the-younglings dark side path more often than being the good natured Jedi or Smuggler you were intending on playing. As I am going to play a Sith Warrior, I hope I can corrupt Vette into thinking just as evil as I want to be myself; I don’t want her moral compass to guide me, but mine to change hers.

May the Force be with you.

What it boils down to, are the player’s choices while playing. Bioware seems to be very proud of the story component they are adding to the game, and we all hope that they will deliver on it. The difference in depth between light and dark side choices can only add to the storyline overall. But remember, unlike in regular RPG’s, there is no rewind or reload possible when you have made the choice. That one epic endgame series of quests? You might find yourself unable to start it, because you killed ‘random story person’ at level 7. It could very well happen.