Today, we get some clarification on mods, how they work, what equipment they can go on, and explain the changes to the color system for gear in The Old Republic, as the game is now. Associate Lead Designer, Emmanuel Lusinchi explains more in this forum post. Today’s information is very important for the crafters and everyone looking to keep that Tusken Raider suit or slave bikini outfit modded out for Operations.

More about the modding changes and reasoning after the Jump…

Emmanuel lists some of the changes as they are now and how they will more than likely be at launch.

(He also lets us know that the recipes for the Orange versions are found through Underworld Trading missions, in Crew Skills. He goes on to say that this opens up class quest armors from other classes, as long as your character meets armor requirements) 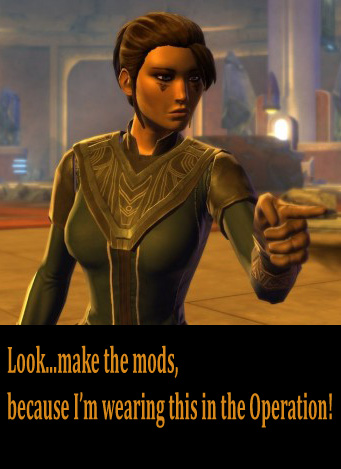 Now, if purple gear was fully moddable, players would simply farm the first boss, acquire 5 pair of boots, extract the armoring, mod and enhancements from the boots and slots them in their favorite Custom items. That actually sounds cool, but it really isn’t. Letting players extract the armoring mod from the purple items would trivialize end game gear progression and stop rewarding successful and dedicated players for their efforts.

Emmanuel adds the following message to the community

Now, with those changes, we are closer to an actual implementation of our modding philosophy than ever before. Is it perfect? No, not yet. There are still some imbalances here and there (and I trust this community to let us know loud and clear if we miss any) but it is close and the remaining issues are on their way to be fixed.

I was in the last part of beta and noticed the difference from before, but I did appreciate the ability to extract mods, at a small expense. The better clarification about the orange customizable gear was needed and does answers questions I had on earlier blue gear and green that was no longer moddable. However, I am sure there are some very strong opinions on changes to purple artifact gear, being only partially moddable. What are your opinions on the changes as they stand and were explained? Please let us know in the comments below.