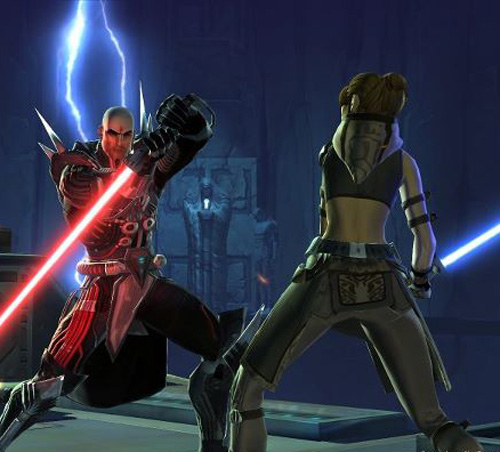 If you don’t know by now and I’m sure you do, but if you have not heard Bioware is getting ready for the official of a small little game, called Star Wars: The Old Republic. Early game access started this past Tuesday the 13th of December, for those that pre-ordered the game. Each day they have been sending out emails letting players know when they can begin their saga. In dev notes, we will look at some news concerning this, more servers and also get into other news in the SWTOR community. For instance, one guild is holding a little 1v1 dueling tournament…& yes you have to read to find out more 😉

More about 1v1 dueling tournament, dev notes, & much more after the Jump…

We’re starting to send out more invites for today.

Here’s the good news: overnight we decided to send out more invites than we had originally planned. However, we’ll be spacing those invites out, which means we’ll have more ‘waves’ than the previous four-per-day. We are inviting more people today than we did during yesterday.

I’ll update this thread as we send invites. As a reminder, we’re also updating our official Twitter accounts (@SWTOR, @SWTOR_FR and @SWTOR_DE) with the invites as they sent; that’ll be more up-to-the-minute than this post.

For anyone who’s not yet been invited, remember to have the email address no-reply@bioware.swtor.com in your address book so it doesn’t hit spam filters.

Assuming you have the SWTOR client installed, you can also periodically launch it. If you’re ready to go your ‘play’ button will be click-able.

(Apologies for slacking off – busy day is busy. )

I just posted in this thread regarding the new servers showing up on the Server Status page. We will be opening new servers as needed as we add more people to Early Access. I’m going to close this thread so we can keep discussion consolidated. Thanks!

Hello everyone! For the next several days, we will be performing some back end maintenance on the Star Wars™: The Old Republic™ Forums. During this time, you will be unable to use the search function for the Forums. However, there will be no other effects to you as a user, and you will be able to continue to message, post, reply, and report as normal.

We apologize for any inconvenience. When maintenance has been completed and searching is functional again we will post here, so please watch this thread for any updates or additional information.

This is not the full update, yet – I’d like Gabe Amatangelo to weigh in. There is one important thing to note, however.

No-one is ‘exploiting’ this aspect of the game. We have looked at the metrics across every server, and no-one is earning an unusual amount of experience from PvP Warzones. In fact, when looking at the top-level players in the entire game, they are gaining XP fastest from completing quests. Also as of this morning, our top player on all servers was not in the 30-40 level range. They probably are now, but then they’ve been playing a lot – and gaining the bulk of their XP from normal quests.

In other words, whoever started this rumor was either confused or deliberately trying to start confusion.

Like I said, I’m tracking down Gabe to talk more about how Warzone XP is allocated and the design decisions behind it. Right now, however, we do not see this as an exploit. In simple terms, a player can gain more XP in the same period of time from normal play than from doing this.

More when I track down Gabe and nail him to a keyboard.

If some of you follow my other article, Guild Checkpoint, might remember the guild Echo Seven. They have started to formulate a 1v1 ladder style dueling tournament on the EU PVP server LEGIONS OF LETTOW. The official sign-up begins on launch day December 20th. The season will last 3 months and then there will be a 16 player tournament to determine the overall winner for season 1. If you would like to find out more information to participate, or sponsor or possibly looking to cover these matches on your live-streams or taped shows just go to their website at this article. Be sure to also check out the FAQ for all the rules.

If you have been busy getting ready for early game access or finishing shopping, decorating, or even gift wrapping so you can be ready for the start of the game and you may have missed some of the last week’s worth of articles…don’t fret, we have a “grace period” with all your favorite Corellian Run Radio articles listed below and even a few special ones just for you, our fans. Be sure to listen to the beginning of the 12 Days of Christmas…Bioware Style audio started yesterday.

This week’s SWTOR video is also a revisit to another guild, True Covenant. They have released a new guild trailer. I hear the moans already and see the eyes rolling, because most of the videos…even the good ones have been various cuts of the same three cinematics we have saw for the past few years. However, this one is really unique. Not only have they included the guild’s story, but used in-game footage from cutscenes to tell it. I would urge you to take the time and watch the video and then make your judgment on it. Let us know in the comments below.

Also if you have made a funny SWTOR video from your in-game footage or another type of music video dealing with SWTOR please email me a link and I will try to get included in the upcoming HoloNet Link articles.

Are you already in early game access? If so, how has the game been? Do you like how Bioware is staggering players into the game? Is it a good idea? Let us know below in our comment section.

That’s all this week from the HoloNet Links. As many of are getting into the game and taking in all that Bioware goodness found in the game, be sure to keep checking out the site as we continue to bring you articles and news related to, well at least my newest addiction, SWTOR!