This week we look at the Followers of Palawa. This guild is a first for us in being a RP-PVP server based guild. We will look at why they decided to choose this type of server and how it is working for them. This guild also has a great back story and roots in being neutral based. We will look at their story and also some guild organization like their badge system. Kyandas will join us in the Q & A section and help us to learn more about them.

More about the Followers of Palawa after the Jump…

How did the guild get its start and when?

The Followers of Palawa began in April of 2009. I had heard of The Old Republic being the next big MMO but, my time within the gaming scene had been coming to a close as I prepared for college and what not. However, in times of darkness when a new hope is needed my cousin Aden Akaan (co-leader) simply escorted me out of my short retirement for another run at gamming. I have a pretty long history of guild leading, not to mention a passion for creating an innovative environment. After gathering a few old friends the guild was formed and here we are four years later happy as ever.

What server can Followers of Palawa be found? What kind of server is it?

We can be found on Jung Ma which is an RP-PvP east coast server.

Why did your guild choose to embrace both factions even as a smaller guild? How are some ways the guild balances out the guild’s needs between the factions? Has this been hard to get fellow members to get behind?

I guess I should keep this one short as there is a lot to say but, ever since our adventures within the TOR universe began I desired to play a Jedi where as my counter part (co-leader/cousin) desired to play a bounty hunter. Unfortunately, neither of these classes may interact in a peaceful manner, which in turn was one of the reasons of the split faction. Surprisingly, our members took to the idea quite well as more news of The Old Republic’s story emerged. The Star Wars universe should never be limited to the curious. With thousands of hours of adventures and content to be experienced, the sheer thought of limiting such a universe to our current and future members was not an option.

I can say that we were the first duel faction guild devoted to TOR and still walk the galaxy today. This is but a result of our sincere determination, loyalty, and respect for one another.

How does the Star Wars martial art combat, Teras Kasi play into the guild’s story and beginning?

The martial form does not play a huge role in our guild’s story other then being a form created to better our combat skills. I do plan on integrating it on a more elaborate basis; however, our story is quite detailed as it stands.

As a RP guild, how much role-play do you expect from members?

The announcement of an RP-PvP server was great news for us as many of our members enjoyed role-playing since the guild’s foundation on 2009. However, our level of RP is quite light, and do not expect our members to role-play 24/7. We have a small group of those dedicated to the genre and will engage in the activity more often then others. We schedule events where members are not obligated yet encouraged to participate.

To put it simply, if any player enjoys Role-Playing in a respectful environment and one that is spontaneous then we are a perfect fit.

The Followers of Palawa have a very interesting story along the grey and neutral lines. Can you tell us about the story and how the guild plans to use it within the game?

This is a very good question and one I love answering. To begin, one must understand the history of the Followers of Palawa within the Star Wars canon. An ancient Order living on the planet of Palawa studied the force and Midi-chlorians until they were forced to leave since their home world was destroyed. This event had been caused by The Third Great Schism of the Jedi Order on Coruscant.

From this small bit of information our own story was formed. Generally speaking the average star wars junkie may say that the Light/Republic is good while the Dark/Empire is bad. Thankfully, this view point is far from the truth as both factions and ways of the force are either good or bad from different perspectives.

Our story begins with turning the Force into a deity, a being capable of speaking with its followers. The Force or True Sovereignty has witnessed the corruption of her teachings and calls upon her followers to cleanse her gifts as they are tools of peace. However, the galaxy is thrown into a galactic war, and now peace hangs by a thread. 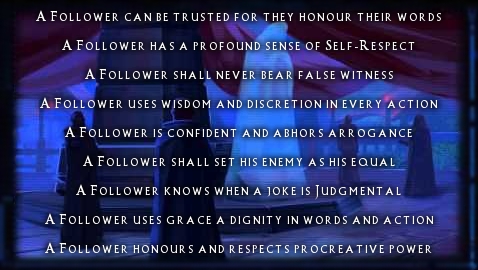 The Followers of Palawa are followers of the true nature of the force, as we fight for True Sovereignty.

Thankfully, this story line has easily allowed for duel faction membership, and allowing all classes to join our cause. Bioware’s great story telling has allowed for our story to continue In-Game as our story choices allow us to kill members of our own faction while helping our counter parts. Our participation in PvP, and a RP-PvP server have greatly shaped our presence within the galaxy and truly edified our purpose has The Followers of Palawa.

How have you enjoyed the game so far, through early access and the official launch?

Right from the get go The Old Republic was everything I ever wanted and more. Sure there are a few kinks here and there but, it is a new MMO. The game is polished and Bioware has done an excellent job in successful launching this game without too many headaches.

What class did you start the game as and what Advance Class are you or plan to be?

My adventures in The Old Republic have begun as a Jedi Knight, specializing in DPS, or the Vigilance Tree.

Your guild has many various things in your website like awards and actual medals and several very well designed website additions. Can you explain the awards/medal system and also who is responsible for the extra web elements or is it guild collaboration?

One of our greatest features is our Award System which also coincides with our Ranking System. Awards are given out on a monthly basis and award Followers with a certain amount of credits depending on what they earned. Credits can later on be spent for In-Game prizes such as crafted items, money, things that are useful to players. To add to this, we have required that in order to achieve specific ranks within the guild awards must be earned. It is an interesting system that adds some diversity to the community and a sense of accomplishment.

I should also mention that our ranking system does not tie into any leadership roles, or as we prefer, Roles of Responsibility. During my past experiences of leading and being part of guild the essence of members with power never intrigued me. I have always found it better to entrust willing members with responsibilities rather then a degree of power. Keeping an atmosphere of equality is very important. Even as a guild leader who decides the future of the guild and its members, constantly interacts with the collective to understand what is in everyone’s best interests.

The best way to describe my leadership would be “The greatest leaders are the greatest followers”. Leading with an open mind willing to learn and being an individual of understanding are key qualities in a leader.

Now, when in comes to building a community it takes many hands to make light work.

*It varies from week to week. All members are invited to join us as we crack down and deliver the scope on TOR*

How did the Mind Meld podcast, on Bootleg Radio, get its start? How does it impact the guild?

In June of 2011 the idea of starting a guild podcast was growing but we needed that extra push. During our interview on Galactic Underground/Bootleg Radio, we received that last push and were given a spot on the radio station to publish a weekly show.

For the guild it was another great feature to not only look forward but, one to be a part of. It is a lot of fun to do, and the guild itself enjoys the fact that we get to broadcast once a week and give something back to the community.

If you want to check us out be sure to head on over to Bootleg Radio every Sunday at 5pm EST.

Is the guild currently recruiting? If so what steps do potential members need to take? Are there any specific classes the guild is looking for in new recruits?

Indeed, the guild is still recruiting, and always looking for more players willing join a guild which emphasizes friendship. In order to join simply visit our site and register, while filling out a quick application form. From there you will enter a trial phase requiring 5 simple steps to be completed. Make new friends, join us on Vent and get ready for an adventure of a life time.

*Currently all classes are open, all we ask is that you present some form of character back-story, and are open to light Role-Playing*

Check our one of their recruitment videos. It is very well put together combining aspects of their story with screenshots, cinematics, and some great well known Star Wars music, even a bit of KOTOR music. Take a look and let them know what you think in the comments below.

That is a look at the Galactic Republic guild Followers of Palawa. If you are into roleplay and looking for a Republic guild with the realism of PVP in Star Wars: The Old Republic, you should check them out. A special thanks to Kyandas for all his time and information. Remember, if you would like to have your guild to be highlighted on CRR, please submit your guild’s name and website in an email to me at jason@corellianrun.com.