The time has come to announce the winners of our “Create a Character Profile and Win a Razer Peripheral” contest.  Before we do that, we want to thank each and every person for taking the time to send us a submission.  THANK YOU!   We had a tremendous response and your submissions made it a very difficult process to pick a winner because they were all good!

Comments, winners and more after the jump…

Now for our Winners!

Dragging a forearm across her forehead to keep the sweat from her emerald eyes, the young Jedi Consular crouched behind what was left of a stone pillar, using the short lull in the battle to draw a much needed breath. The fighting had been non stop since the Sith had attacked, capturing the Senate building and destroying the Jedi Temple, but she had no time to dwell on that as the fine hairs at the nape of her neck rose again in warning. Drawing on the Force, she entered a deadly calm and feinted left, her lightsaber humming into existence as she dropped fluidly to the ground and rolled. Deftly coming to her feet, she faced her next assault.

The soldiers fired rapidly as they advanced, leaving the exhausted Jedi hard pressed to deflect their blasts. She found herself pressed back towards the ruined building she had used for cover only moments before, her feet somehow picking their way unerringly through the rubble. Never one to like the odds stacked against her and even less so with her back against a wall, she unleashed a Force-wave that sent one of the attackers flying through the air, landing dazed against the pavement. Using the Force to guide her, she continued to deflect the blasts of the second attacker, allowing him to close the distance before pivoting suddenly on her heel, her blade slicing through his heavy armor to cleave through the flesh below. Her gaze rose towards the other man just in time to see him scrambling away before shifting to focus on a building only a block away.

Davron Mickal’s head snapped up as the door slid open, his hand unconsciously going to his…empty holster. Bracing himself in expectation of another attack, he once again faced the door and felt an instant of relief as he saw the Jedi Knight warily slip through. That relief was soon replaced by shock as she moved closer.

She was, quite literally, a mess. Her delicate features were obscured by a layer of grime, an obvious testament to the situation outside. Her hair which had at one time been intricately braided and wrapped, coronet fashion, around her head, had begun to unravel, leaving pale copper curls plastered to her face, the rivulets of sweat allowing him to glimpse a hint of her pale skin. Davron winced slightly as she snapped off her lightsaber and stood motionless just inside the door. He must have shifted, and her eyes caught his in a piercing glance.

The lieutenant hurried over to her, shock and fear evident on his face, “Master Jedi…?”

“Alessia Cosolaro,” the young woman murmured by way of introduction as her eyes cut across the scene in front of her, taking in the shattered consoles, “Is anything still functional?”

She sensed his uncertainty and offered up a wry grin, “My apologies, Lieutenant, I must look frightful,” meeting his eyes with an amused gaze she gave an abbreviated bow, “Jedi Allesia Franklyn Cosolaro, at your service.”

Security Officer Eleen’aven: [Enters room with a handful of flimsiplast, sits down at table across from Corellian male in for questioning]…Draeks?

Draeks:            [Pouting] Not for lack of trying. I was on Coruscant on my 18th birthday, ready to enlist.  As luck would have it, that’s when the Sith attacked and sacked the planet. I was under pretty heavy fire when I realized military wasn’t my thing. I have quite the collection of souvenirs to prove it. Want to see them?

Draeks:            Well, I “borrowed” a Mark VI Imperial Interceptor once the Treaty was signed, and I  headed back to Corellia. Bought myself a ship and got my face fixed up. Been running a courier service with that ship ever since.

Draeks:            Much more emphasis on my heroics and continued mention of my suave nature and  roguish good looks. And further insistence that you see my battle scars. Because that’s what I meant when I said ‘souvenirs’. It’s called a metaphor.

Eleena:            [Sighs, shuffles stack of flimsi] Looks like your ID and story check out. Since we found nothing illegal in your possession, you’re free to go.

Draeks:            [Leans across table, places hand on top of flimsi] Since you seemed so interested in me, how about I buy you a drink and we talk some more?

THE CHARGE OF “BEING REALLY RIDICULOUSLY GOOD-LOOKING” WAS ALSO ADDED, AT THE INSISTANCE OF THE CAPTAIN 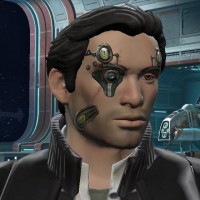 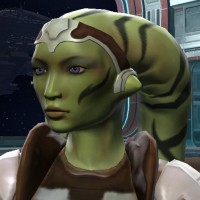