This is the first HoloNet Links of the New Year! I hope all of you have a great year, especially a great year in Star Wars: The Old Republic. Today, we have a lot of great links and info about the game and news from folks like James Olhen, Gabe Amatangelo and Greg Zoeller. They cover PVP future ideas/fixes/level 50 brackets; also cover their commitment to fixing bugs in general, and also confirmation of a rare crystal 😉

More links and community news after the Jump…

Let’s start out the New Year with a bit of fun with a great video before we get into SWTOR news and links. This week’s video comes from SaosinNorg on YouTube. It is using all gameplay footage and creativity edited to Atreyu’s song “Falling Down.” Let us know what you think in the comments below.

Do you have a creativity idea for a SWTOR music video or maybe a short story using in-game footage or maybe you have the urge to be the “John Madden” of Huttball and have a match with commentary? If so please send the links to my email, jason@corellianrun.com

The Magenta Crystal does in fact exist, but it is not acquired through Reverse Engineering. At the present time, it could be classified as one of the rarest items in the game.

While I am not going to give any more information on how, where or from whom it may be acquired, I want to debunk the idea that you have to reverse engineer endgame gear to get it so people don’t do stuff they regret.

Auto-invites also expired overnight, so any invites will now need to be done manually.

Our Terms of Service team recently took action against some accounts playing Star Wars: The Old Republic and we wanted to give you some insight into what happened and why.

First, action was taken against a number of accounts for what’s commonly known as ‘gold farming’ – or in our case, credit farming. These accounts were found to be exploiting the game in a variety of ways to maximize their credits in order to sell them to other players. Our Terms of Service team took action against these accounts and removed them permanently from the game.

Second, a smaller number of accounts were warned or temporarily suspended for exploiting loot containers on Ilum. To be completely clear, while players may choose to travel to Ilum earlier than the recommended level (40+) and may loot containers if they can get to them, in the cases of those customers that were warned or temporarily suspended, they were systematically and repeatedly looting containers in very high numbers resulting in the game economy becoming unbalanced.

It’s important to remember that our Terms of Service team is extremely careful and thorough in their investigation of any potential exploit or unusual activity in-game. Working closely with the development team and using extensive metrics based on player activity, they are able to determine what is normal player activity, what is unusual and what is exploiting. Our goal is always to ensure a fair game experience for all players while also protecting the rights of individuals, and if people are disrupting the play experience for others action will be taken.

While we will not discuss the details of any individual action, whenever we take action against an account we believe they have clearly broken our Terms of Service. Any action taken against an account can be appealed and in some cases actions have been rescinded.

In summary, our Terms of Service team took action against a number of accounts that were ‘credit farming’ to remove them permanently from the game. They also warned and temporarily suspended – but did not ban – a smaller number of accounts for activities on Ilum that were decided to be game exploits.

Some adjustments will be made to Ilum in the near future to discourage future exploits. However, the planet is still open to anyone who wishes to travel there.

The goal of the Star Wars: The Old Republic team is to maintain a service for our customers that is fun to play and equitable for everyone. Critical to this goal is making sure that gameplay is fair and reasonable and we are constantly on the lookout for anything that would prove to be a detriment to your gameplay experiences.

Thanks for reading, and we hope this gave you some insights.

This is a link to the entire post. It is rather lengthy, but if you happen to be suffering from slow download speeds on parts of patches, please take some time and read it all.

James Olhen’s: A word on bugs

Any game as big and as complex as The Old Republic will have bugs. We’re working as hard as we can to find, fix, test and patch the game to eliminate as many of them as possible.

Be sure to check out the whole article in the link above quote. It is a short read, but nice to hear James and Bioware’s commitment to fixing and making things better.

PVP update for the New Year from Gabe Amatangelo

Some of the main highlights from the article quoted below: 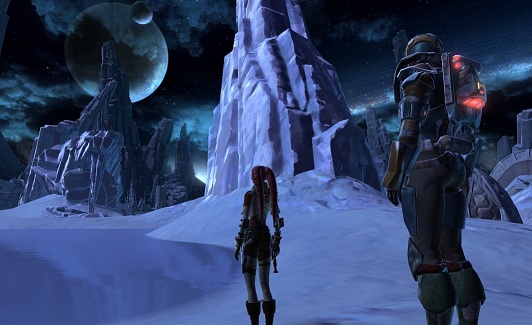 A special quote from Gabe Amatangelo, writer of the blog and Principal Lead PVP, Operations & FlashpointsDesigner:

Additionally we’re looking at ways to enable team vs. team, more level brackets and the ability to choose which Warzone you want to play in.

I think that being able to select which Warzone to participate in has to be one of the best things in the whole article. On another note, did Gabe make these changes known after listening to the ladies here at CRR made mention about choosing your Warzone and PVP needing some fixes? Hmm you just never know who is listening to the podcast 🙂

Patch notes and about Upcoming Patch

Here is a link to patch notes from yesterday and some mentions of things that should be fixed in today’s patch. Below are a couple things they are to be patched by today’s patch.

We are working on getting a patch deployed to address the issues that some players are still experiencing after 1.0.2 including:

Like any game, especially one this size, there are bound to be bugs. It is a good sign how Bioware is working to fix and maintenance them before adding a lot of new stuff.

It is a new year and things are picking up in the game, but don’t worry we have all your favorite Corellian Run Radio articles and news stories from the past week. For your benefit we have them listed below.

01/04 Thom’s Thought Transmission: Do references break your immersion? By Thom

That’s all this week from the HoloNet Links. What has been your gameplay so far…are you playing one character or trying to level multiple toons?  Let us know in the comments below how you are playing.