Time for another Guild Checkpoint, this week we look in on a guild that is all about hardcore raiding. Whether you consider hardcore raiding by working for the top gear or being server/world first at bosses or entire Operations, or raiding almost every day of the week…Nightmare Asylum prides itself in doing them all.

Have you wanted to be a part of a top-tier raiding guild or want to know what it takes to get to that level? Well sit back and get ready for the Jump, as we get to know this week’s guild and how to they got to become hardcore raiders.

More about hardcore raiding from Nightmare Asylum after the Jump…

How did Nightmare Asylum get its start? What led the guild to choose Star Wars: The Old Republic as the guild’s next game?

Back when WoW was first released, the guild was formed under Fura. Since then, there have been many transformations to the guild, and those who know our history well will remember that for about 2 months NA was known as Rival. Then two months later we went back to Nightmares Asylum.

Nightmares Asylum stopped raiding WoW at the end of WotLK, and we’ve been waiting for a new MMO that promised to provide an end-game raiding experience like we’re accustomed to raiding… and Star Wars: The Old Republic is that game. 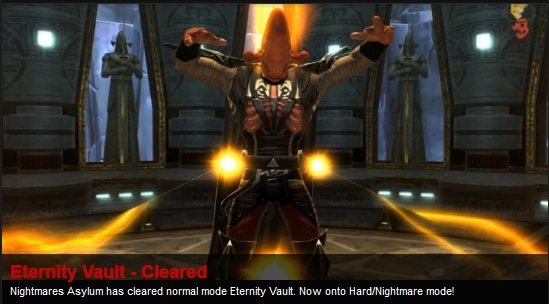 Many of us raid, even beyond being casual, but can you explain what it is to be a hardcore/competitive raiding guild?

The simplest way I can explain it would be that it’s all about mentality. Everyone that’s a raider in our guild is expected to want to be the best, and will put in hours wiping time after time to the same encounter until it’s down in hopes that we’re the first people to down that boss.

It is also in knowing that the guild and progression come first. Who gets loot first is reflected by this. We typically try to gear out our main tank, followed by DPS, followed by Off-Tank (which really hasn’t been needed much in Star Wars: The Old Republic yet, but that’s another subject), followed by healers.

Nightmare Asylum has already done some serious raiding in SWTOR. What has been your guild’s experience been in Operations?

The game needs serious work. There a numerous bugs that exist in endgame raiding and even with patch 1.1 coming out next Tuesday they still exist. It worries us as a guild, and is a huge red flag, that Star Wars: The Old Republic doesn’t currently allow character copying to the Public Testing Realm. Nor do they currently allow you to just make a level 50 with decent gear.

Since there are no 50’s on the Public Testing Realm, we know that the patch 1.1’s endgame content will not be tested by the public. I think this is a fatal mistake on Bioware, and they quickly remedy it.

Have there been any major issues that your guild has come across in Operations? What would be some changes or improvements in Operations that Nightmare Asylum would like to see added to SWTOR?

The fact that nearly all encounters can be done with one tank is somewhat of an issue. It limits the mechanics of an encounter greatly. The bugs are very annoying as well – randomly people will die, loot bugs, pylon bug, encounters not working as they should, etc.

Beyond that, I think encounters are just lacking a certain design elements. Most people don’t even consider the 1v1 encounter or pylons a boss, it’s just free loot. Finally, 8 man and 16 man operations need to be brought closer in difficulty. Trash mobs in the 8 man have 30k hp, yet in the 16 man they have 200k. That seems a bit puzzling at the huge difference in hit points. Seems someone didn’t think that one through.

How did your guild decide on server type and faction for this game? Does the guild plan to play as the other faction, to complete the other Flashpoints? 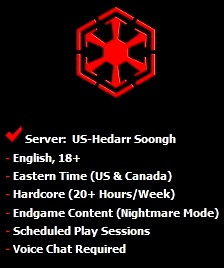 We’ve always been on PVP servers, and we were a horde guild in WoW. So naturally we would pick Empire for this game. With that being said, we are working on forming a Republic guild, so stay tuned for that announcement which will be made at our website when it’s finalized.

What requirements are there for members of the guild?

A member needs to have the following: 90% attendance, having good communication skills, and being able to take criticism. There are a lot more, but that’s the best way to sum it up. When someone applies on our website, they will be asked to read our requirements.

If a player or guild wants to improve their raiding skills, what are some things you would suggest?

Set player expectations. What I mean by this is everyone should come to the raid fully prepared, and with all the consumables they will need. Also, if someone isn’t pulling their weight, that needs to be addressed quickly. If someone keeps dying, you need to figure out why that’s taking place and then fix it.

Would Nightmare Asylum like to see elements, like Huttball, become E-sports? If so would your guild compete?

I don’t think Star Wars: The Old Republic is ready for E-sports. Maybe way down the road it will be ready… but as of today I wouldn’t support such a thing.

Does the guild plan to participate in the Open World PVP on Ilum?

Yes, we do a lot of PVP when we are not raiding. 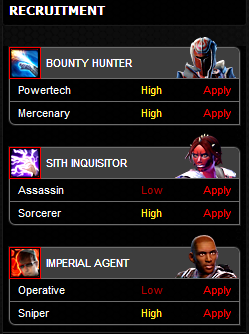 Nightmare Asylum is recruiting new members correct? If so what classes/advance classes is the guild looking for?

This changes week to week, but it’s always displayed on our home page which you can find at this link. Currently we’re looking for more ranged DPS and healers.

For players seeking to find out more information about your guild and/or possibly filling out an application how can they best get in touch with you and the guild?

I want to thank all of the guild Nightmare Asylum. Big thanks to Eezee, for all his help with this week’s article and letting us learn about their guild and about hardcore raiding in their guild.

Does your guild like to raid, or PVP or maybe your guild does something completely unique, that we have yet to highlight? If you would like to share what your guild is all about and get your guild highlighted on Corellian Run Radio, please submit your guild’s name and website in an email to me at jason@corellianrun.com.