Guild Checkpoint is where we take a look at the guilds in Star Wars: The Old Republic. Today in addition to that…we will be revisiting some of the guilds we have featured and see where they are now post-launch. Our first revisit is with The Brotherhood of SWATH. We talk again with their “infamous” leader Mr. Crowley. He sheds some light on how their guild has taking to SWTOR, especially this being their first MMO on a PVP server as a guild. We will also find out some of Crowley’s opinions concerning the state of the game and yes, it is PG.

More catching up with The Brotherhood of SWATH after the Jump…

Can you refresh our readers a bit about the Brotherhood of SWATH, and what server your guild is located?

The Brotherhood of SWATH is comprised of gamers from all backgrounds and cultures from all over the world. The SWATH has had a presence in many “mmo’s” including: Star Trek Online, City of Heroes/Villains, Champions, and World of Warcraft.

The Brotherhood of SWATH is an Imperial Guild that is based on Vulkar Highway server, using the US East timezone to organize events, and are PVP and End Game focused. We have our own podcasts and are always looking for great people with great ideas. We have several websites that you can navigate to using the SWATH LINKS on the nav bar.

How have you and Brotherhood of SWATH enjoyed being on a PVP server? What are some good and bad things you all have come across being on that type of server?

Since we last meet your guild, we now have a live game. How has SWATH Radio found Star Wars: The Old Republic post-launch? Are there any major issues with game mechanics etc. that your guild has come across?

First, the game is absolutely amazing.  We’re addicted.  That said…nothing is perfect and SWTOR is far from perfection.  While the launch of SWTOR was the smoothest we’ve ever seen from an MMO some of what Bioware is doing/have done leaves us scratching our collective heads.

The major issues we have are the amount of what we would consider “high level” bugs.   For instance, not getting credit for warzones won or not receiving credit for finishing a flashpoint because death caused you to get kicked from the instance at the time the boss was killed.  These are just two high level bugs that have caused us headaches.  How about an unscheduled maintenance on a weekend?  WHAT?!  Really Bioware?  Really?

Then let’s talk about the train wreck that is Ilum.  Great idea on paper but it sucks in practice.  It’s a giant cluster…well, you know.  It’s awful to say the least.  First it was “play nice” with the other side so you could both get your daily done and now it’s worse than going out with a “tease” on a first date.  Because of faction imbalance one side just sits and hides at their base.  It’s dumb.  It needs fixed.  It needs fixed NOW!

Again, because of faction imbalance, I’m sick of Huttball.  Give us more same faction warzones AND more Huttball maps!

A lot of our guild is still leveling.  Our guild really loves the story and is taking their time with it.   We’re not like some other guilds that stayed awake for 3 days straight to hit 50 and only slept while they were on the toilet (you know who you are!).  We’re really PVP focused right now as a result.  We have killed several world bosses (ones from Korriban, Tatooine, and Nar Shaddaa) and are currently running 4 man Hard Mode Flashpoints. 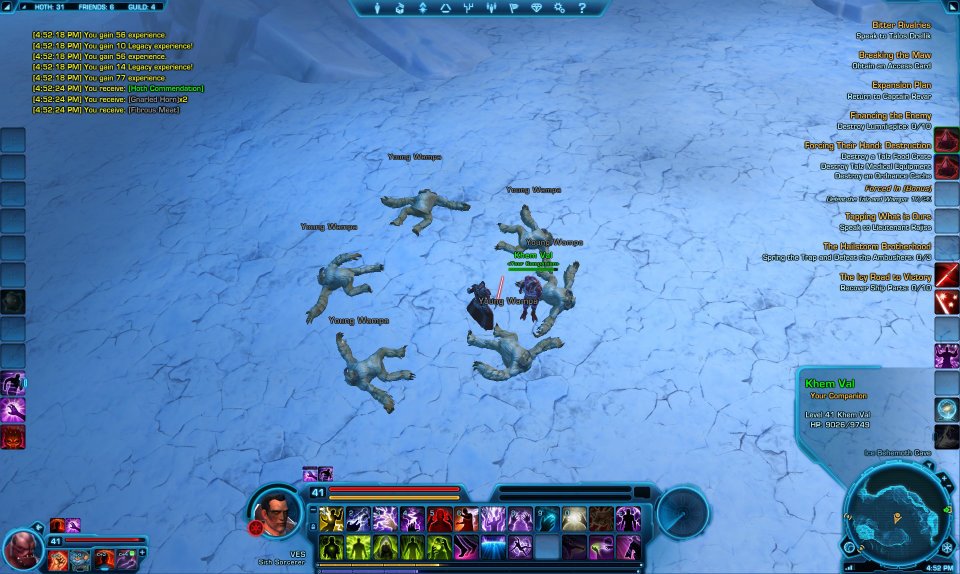 "Momma Wampa" is not going to be happy

A guild calendar would be wonderful.  That would help us out a TON!  We’d also like to see guild “housing” of some sort introduced.  We’re tired of hanging out on the Imperial Fleet and having to deal with all of the crap that goes on in the General Chat.  Bioware needs to crack down on some of the comments we’ve seen fly through there.  The other thing we’d like to see is Guild Achievements.

Do you or members of the guild take part in the Public Testing Server? If there was a quick level or copy feature to test endgame content would you test more or think it would help the overall game?

Nope.  My (Crowley’s) personal opinion is this:  Bioware pays for testers.  Bioware isn’t going to take away from my playtime to test their ideas (ESPECIALLY ILLUM).

SWATH Radio is another SWTOR podcast. How is your podcast going and where can folks listen or download your podcast?

Besides trying to stop playing SWTOR to record the show is going GREAT!!! We have had one upgrade, since last interview…we are now part of Bootleg Radio. This seemed like a good fit for us since many of our buddies at Bootleg Radio would also be playing as fellow Imperials on the same server.

We’re working on a new site (no ETA) and working on an RSS feed for those who don’t want to use iTunes or download from our site. Until then you can find us at our present website or on iTunes.

What is your class/advance class and level currently?

Warzones, without a doubt are where we spend most of our time.  Well, that and leveling.  We have had several members get to level 50 by only doing warzones and their class quests. 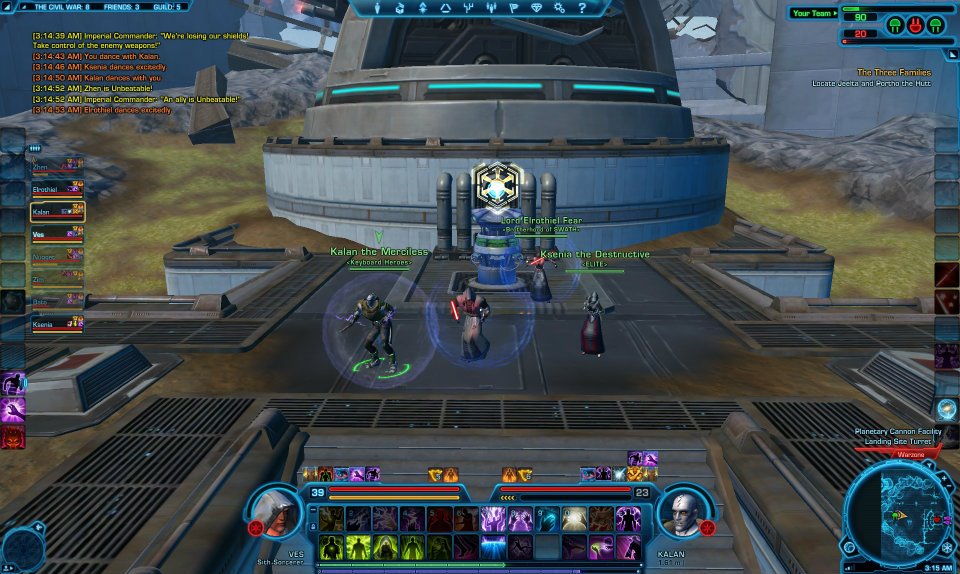 SWATH and other Imperials celebrate a win

Have you all gone through the new Flashpoint, “Kaon under Siege?” Are you surprised by new content being released so soon or think it is just about the right time?

We haven’t run that one yet.  We’re really focused on PVP right now.  Are we surprised by the release of new content so soon?  Yes.  We also think it is the right time.  They need new content like this every month or two to keep interest and give us more to do.

Is Brotherhood of SWATH currently recruiting? If so what classes/advance classes is the guild needing? What steps do potential applicants need to follow to join?

We’re always looking for good players with great ideas.  All they need to do to join is ask.  That said…if you’re a douche we will kick you.

How can players find out more about the SWATH Radio guild? What form of communication works best in-game, email, Facebook, Twitter, etc.?

You can find out more about us on our website (www.swathradio.com) or follow us on Twitter @Swathradio or you can email us at crowley76@swathradio.com or cmdrbatty@hesadouchebag.com

I want to again thank Crowley for all his help with the article. Just like our first visit with The Brotherhood of SWATH, this one was enlightening.

Almost everyone playing SWTOR have a lot on their plate, especially the ones who are responsible for running a website, doing a podcast, taking a leadership role with your guild, anything that represents passion surrounding this game. Yes, some have very strong opinions, but that does not mean they love this game less. I urge everyone to not just sit on the sidelines…but to do something, because when it comes down to it, the gamers are the ones who will make or break this game.