The galaxy is a big place with billions upon billions of beings spread throughout it’s vast distances.  There are countless worlds and locations of note populating the expanse of the Star Wars Universe.  In Star Wars: TheOldRepublic, you, as a player, get the opportunity to travel through the galaxy and experience what it has to offer.  Force Lore on Corellian Run Radio will be your guide in knowing who, what, when, and why of the galactic storyline and what makes it tick.  Set your navicomputers and let’s make the jump into the heart of this!

Greetings spacers!  Welcome to the first installment of FORCE LORE, the weekly column that will travel in-depth into the histories and stories of Star Wars and The Old Republic.  Each week we’ll be tackling various topics that will give you the big picture as to what makes the characters, places, and things within The Old Republic tick.

I’ll give you a peek into my head quick as an introduction, and then we’ll move into the real meat and potatoes of the column.  I come from a 25+ years gaming background, everything from FPS to RTS to RPGs.  When I say RPG, I mean even the old-school, table-top, pen and paper, RPGs.  But MMOs have been my favorite for the better part of the last decade.  It’s hard not to get immersed into the world of a MMO game when it’s well done and there’s a good story to go along with it.  That’s Star Wars.  And what a rich, expansive story does it have!  I’ve been a huge fan of Star Wars since the original debut back in the 70’s.

Where it all started

So you’re playing the Empire, or even the Republic, cruising through your origin world, admiring the scenic view all around your character.  You know who your mortal enemy is:  It’s the Republic for Imperials or Imperials for Republic.  You know you’re going to have to cross paths with them and probably try to rack up a kill score on a few, too.  But do you know why you’re fighting each other?

This isn’t just a case of “because the Jedi are the good guys and the Sith are the bad guys.”  It all depends on “a certain point of view”, to quote Obi-wan.  The Sith fight the Republic because they feel that the Republic damned them and sentenced them to death, now wanting vengeance, following the conclusion of the Great Hyperspace War.  The Republic fights for political and social reasons, along with the idea that if the Empire wins, the citizens of the Republic will lose their freedoms, ruled by the tyranny of the Dark Lords.

Approximately 5000 years before Luke Skywalker blew up the Death Star at the Battle of Yavin, the Golden Age of the Sith was flourishing on Korriban.  Dark Jedi that had been exiled from the Jedi Order during the first Jedi Civil War, the Great Schisms, had encountered the original Sith species, interbred with them and went on to help create the Sith Empire.  The Golden Age of the Sith was a period of time when there was no contact between the Sith and the Republic.  Some Sith knew of the Republic and of the history of their ancestors, but most were ignorant of this.  It is until Jori and Gav Daragon blindly jumped into the Sith’s laps. 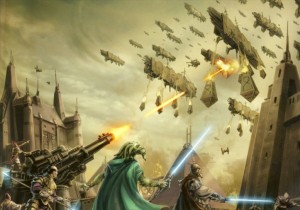 Now, these Sith were power-hungry and prone to using the Dark Side.  Specifically, Naga Sadow and Ludo Kressh, who were bidding for succession to the Sith Dark Lord’s seat following the death of Marka Ragnos.  Sadow recognized the Daragons for what they were and what the information they provided on the Republic meant.  Naga Sadow saw the perfect opportunity to take the Sith Empire and conquer the Republic from which part of the Sith’s lineage had come from.  Sadow allowed Jori to return to Republic space while he turned Gav to the Dark Side.  Jori was part of his scheme, though.  She unwittingly showed the way for Sadow’s forces to travel into the Republic.

Sadow would lead the Sith into the Empress Teta system, Coruscant, and other worlds, intent to conquer.  This was the Great Hyperspace War.  But in true Sith fashion, Gav Daragon turned on Sadow, breaking the Sith Lord’s influence over the battles at hand and causing the Sith forces to be driven back.  Retreating, Naga Sadow’s forces were thrown into battle with Sadow’s rival, Ludo Kressh, and his opposing forces.  The result was devastating, not to mention that Empress Teta and her Republic/Jedi forces showed up right after that to mop up the leftovers.  These events are shown in the “Tales of the Jedi: The Golden Age of the Sith comic books by Darkhorse Comics.

Here’s the knife’s edge of the storyline.  The Republic chose to hunt down the Sith and end their threat for all time, destroying many Sith in the process.  Others were stranded and exiled to remote worlds.  One in particular is covered in the novellas “The Lost Tribe of the Sith” series by John Jackson Miller.  (You can find that on Amazon.com in ebook format.  “Lost Tribe” gives a good insight into Sith society and their traditions.  I highly recommend it.)  One other Sith sect, led by Lord Vitiate, fled to the unknown regions to escape the Republic and Jedi.  After 20 years of random jumps through hyperspace and hiding, Vitiate’s forces come across Dromund Kaas, where they set up a growing empire, with dreams of revenge.

So… Can we say that the state of affairs comes from the original Sith invasion by Naga Sadow?  Yes.  But who’s in the right?  Is the Republic holding a grudge still?  Are the Sith looking to avenge their fallen ancestors that the Republic hunted down?  The Republic can claim defense, both proactive and reactive, towards battling the Sith.  The Sith, dealing more with raw emotion driving them, took affront to the threat posed to them and were wanting to make a statement of “mess with the bull, you get the horns.”  Yes, they wanted power too.

This would be simple if the Great Hyperspace War were the only thing that the current state of affairs in SWTOR was based on.  Unfortunately, it’s not. 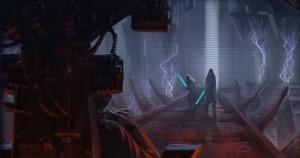 Between the end of Naga Sadow’s attempted conquest and SWTOR, the galaxy was rocked by numerous other conflicts between the Light Side and the Dark Side.  The Republic and the Jedi Order had to deal with other evils that crept up.  The Beast Wars of Onderon, the Freedon Nadd Uprising, and the Old Sith Wars rocked the Republic and the Jedi Order.  Events centering around Revan and the Knights of the Old Republic game series also took place.  Events in Knights of the Old Republic are some of the more significant happenings as a prelude to SWTOR.  But that is an article all to it’s self.

Getting back to Lord Vitiate:  The Dark Lord set upon rebuilding the Sith Empire in secret, biding his time and amassing his forces.  Vitiate named himself Emperor, used Sith sorcery and alchemy to not only drain a planet dry of it’s life and Force essence, but also to form Dromund Kaas into the stormy, Dark Side planet that it is in SWTOR, essentially to extend his life so he could see his plans come to light.  In 3681 BBY (Before the Battle of Yavin) Sith forces struck at the Republic.  The Sith began minor razzings in the Outer Rims to get the Republics attention.  Then, they allowed a holo-transmission to be broadcast from a diplomatic convoy showing the true might of Imperial forces.  From there, it was open warfare with the Sith boldly conquering worlds and territories for the next 10 years.  This was the Great Galactic War.

The Republic floundered during the first 10 years of the war.  But after making a costly stand on Bothawui, the tides of war began to shift.  The war would stretch on for another 18 years before the Sith made a bold strike at the heart of the Republic, Coruscant, and forced the Republic into a treaty.  The Sith lured the Republic into a false hope of ending the war by agreeing to a treaty at Alderaan.  While the Republic thought this was the shining moment that would end the war and drive the Sith back, the Empire secretly shot an invasion force straight to the Core Worlds to seize Coruscant.  After the Sith achieved victory on Coruscant, they forced the treaty to be in their favor, holding half the known galaxy and keeping the Republic on the edge of defeat. That treaty would culminate into the Cold War era in which The Old Republic’s game setting currently takes place.

If you’ve followed the video releases from BioWare, titled Return, Hope, and Deceived, you can see the structure of events for the Great Galactic War.  “Return” shows the Jedi guarding Korriban and the return of the Sith Empire to reclaim their homeworld.  “Hope” shows the turning point in the war when the Republic finally starts to win against the Sith. “Deceived” shows the brilliant/bold move of the Sith Empire attacking and sacking Coruscant and destroying the Jedi Temple, forcing the Republic to give in to Sith demands.

With all this information, you can either conclude that the state of affairs within The Old Republic is stemmed from the Sith and their thirst for power or that it’s due to the Republic /Jedi attempt to eradicate the Sith to begin with.  Personally, I’ll go with the latter.  It’s justice that the Sith are after.  Some may call it revenge.  As Chancellor Palpatine stated to Anakin Skywalker in the Revenge of the Sith novel, “…revenge is still the only justice some beings can ever hope for.”

Tune in next week as we start looking into the histories of the origin worlds in TOR and where things may head for those worlds.  May the Force be with you, always!

Star Wars™ is a trademark of George Lucas and Lucasfilms/LucasArts.  Star Wars: The Old Republic™ is a trademark of BioWare/EA Games.  All content referenced in this article (Characters, locations, story, etc.) are property of abovementioned parties or their respective owners.  All rights reserved.

2 Responses to “Force Lore: Where It All Started”