Last night we celebrated the heroes of the National Football League during the Superbowl. On this week’s Guild Checkpoint, we have another group of “heroes,” the guild Keyboard Heroes. Although having some Canadian ties, perhaps I should have used a Stanley Cup Finals analogy, but I digress. This guild has a couple great guys, Kalan and Sydor, leading the way in-game and also being a well known part of the SWTOR community with their podcast. KBH was featured on an earlier article, and now we find out how the guild is doing and how they are making their way in the Star Wars: The Old Republic Universe.

More about Keyboard Heroes from their leaders, Kalan & Sydor after the Jump…

Can you refresh our reader about the guild, Keyboard Heroes?

Kalan: Keyboard Heroes is an Empire guild for adult players who are looking to take end game content seriously, without the time commitment required by “hardcore” guilds.

Sydor: We created the guild for the launch of this game from the ground up building on a community of like minded adult gamers generally gathered through our podcast, Keyboard Heroes.

What server your guild is located? How has the server community been like? Do you think that balance issues should be addressed or do you think it will eventually those issues will naturally work themselves out?

Sydor: Through the pre-launch guild program we were placed on the Vulgar Vulkar Highway with the rest of the “Scum and Villainy” guilds from Bootleg Radio (SWATH Radio’s Brotherhood of SWATH, Bootleg’s Unconqured, Nothing Gaming’s Nothing Gaming, and Tormonger’s Wrath). The community as a whole has been pretty good so far, I’m not really sure what they could do about the population imbalance between factions. There isn’t really anything they can do to make the Republic scum “cooler” to play. 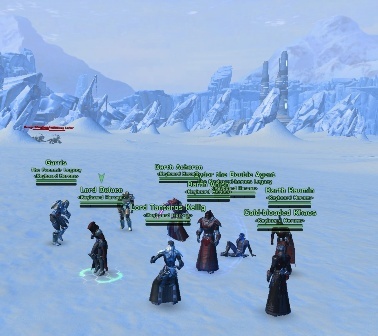 KBH "chillin" before taking on the Eternity Vault

Since we last meet your guild, we now have a live game. How has KBH found Star Wars: The Old Republic post-launch? Are there any major issues with game mechanics etc. that your guild has come across?

Sydor: For the most part I think the guild has found the game – from a stability standpoint – to be quite a smooth launch. That being said I know some of our level 50 members have had issues with the daily and weekly PVP quests being credited properly for wins. For me, I’ve found an issue that we covered in an episode called ‘Blue Balls of Healing’, about my healing abilities don’t quite fire like they’re supposed to.

Sydor: Wait, this game doesn’t have guild banks?! I think most of what I would like to see for starters is an overall improvement in the guild UI. As its stands the guild UI is just a list of people who are online in your guild. There isn’t a way to interact with them aside from setting their member note. How about being able to send a whisper or a group invite to the members of your guild? You know, being able to socially interact with the people you’ve formed an in game social group with sounds like a pretty awesome idea to me.

Kalan: (See above) Yeah, what he said. Not being able to invite someone to my group FROM MY GUILD is frustrating for sure

How have you guys found leveling to be? It is interesting how you can get XP for a variety of different in-game activities, do you think XP and levels come too easy or is about right?

Sydor: I’ve found leveling to be pretty great so far. I really enjoy that there are multiple streams of XP gain and I’m a big fan of using most, or all of them. We’ve been really enjoying the PVP game so far and love that we can get some XP while doing it.

Sydor: As a relatively young guild our biggest achievement and certainly a highlight for Kalan and I, is probably the fact that we’re still a guild and that we’re gaining members and momentum as the game gets older.

Kalan: For sure, when we started this guild we weren’t sure how we’d be received or if we’d get people to join, let alone hang around after launch. The brightest days for KBH are certainly ahead of us and we’re looking forward to Operation and Warzone highlights and achievements in the future! 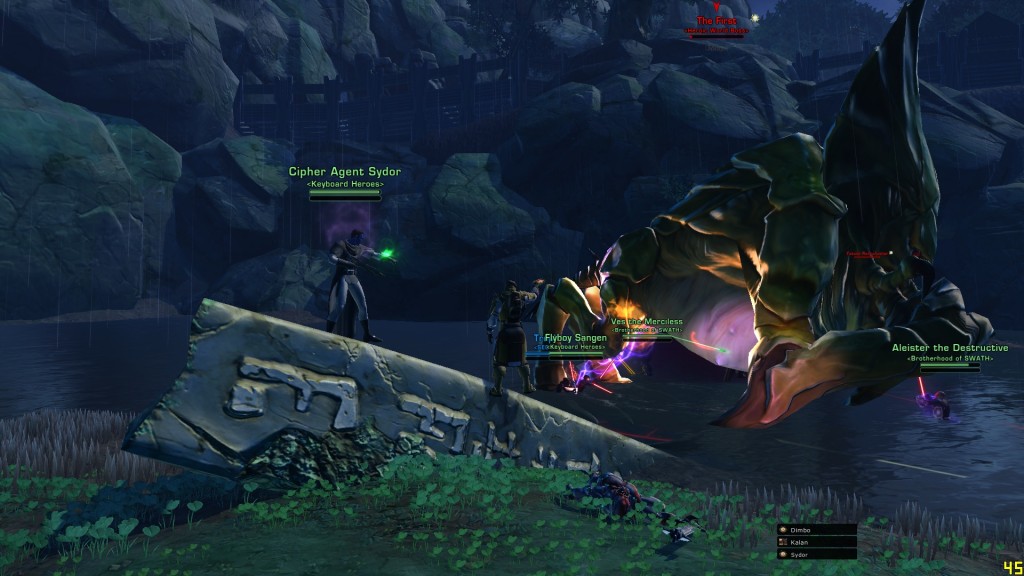 KBH taking down World Boss 'The First' on Dromund Kaas

KBH is another SWTOR podcast. How is your podcast going and where can folks listen or download your podcast?

Sydor: You can find our show on Bootleg Radio every Thursday at 6PM EST.

Kalan: You can also find us on iTunes where you can subscribe to the podcast and get the latest episode every week, right to your desktop!

What classes/advance classes and levels are Kalan and Sydor? As far as classes, do you think there are any major balance issues? What are some class ideas or fixes you guys would like to see happen?

Sydor: I’ve been playing the Imperial Agent Operative as a healer and really enjoying it. I’m currently (as of Jan 31) level 48. For the most part I feel like I can keep any single target alive (so long as it’s not like 1v5 in a warzone!) no problem. My biggest gripe is probably our class’ “bubble” mechanic since we can only cast it on our selves (as opposed to the sorcerer’s targetable bubble) and it’s on a cool down that is about twice as long as other classes. I’d love to be able to bubble Kalan in Warzones when he’s making a push for the goal in Huttball! Right now it’s hard to ‘save’ someone who is close to death when I arrive to a fight and they’re getting pounded on. (Sydor has reached level 50 now…congrats!*)

Kalan: I have played ONLY the Powertech Bounty Hunter as a tank. (this is a big deal because usually in other games I would have had switched between 3 different ‘main’ chars). I love the Bounty Hunter for its Gameplay and mechanics of tanking (not the story) 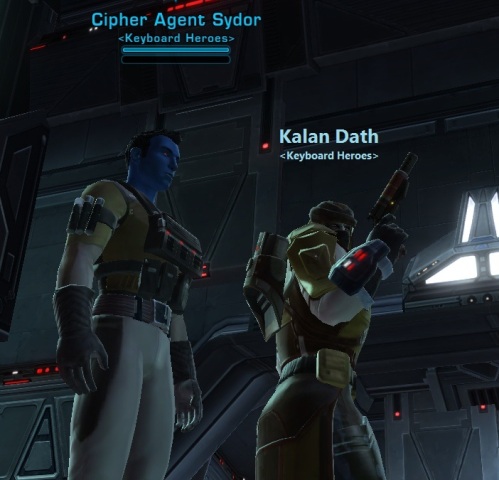 Has it been a mad dash to level cap or have you been taking it a bit slower?

Sydor: Well we’ve been dashing as much as RL has allowed us to. I’m pretty sure Stock has a self imposed “slow burn” in his class story!

Sydor: Much to the dismay of a couple of our members that have been level 50 for a couple weeks we haven’t raided anything other than a couple world bosses. Our focus has been playing as much together in warzones and flashpoints but in the next week or so should shift towards Operations as well.

Kalan: Surprisingly (as i am not a PvP’er) Warzones… Mostly because I am an absolute beast in a warzone…Fear me (insert evil laugh) 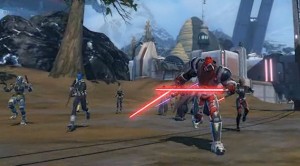 Is Keyboard Heroes currently recruiting? If so what classes/advance classes is the guild needing? What steps do potential applicants need to follow to join?

Sydor: Despite what Kalan may tell you, Keyboard Heroes is recruiting! We’re looking for more DPS and healers as we go forward in building our operations group(s). While we’re not necessarily ‘full’ on tanks, we’re definitely a little more selective and a consistent raid spot might be a little hard to come by until we get a second group up and running.

Kalan: The best thing for anyone who wants to join the guild to do is to head over to the guild’s website (www.keyboardheroes.ca) and click the “Fight for the Sith Empire” link on the left hand side then follow that up by sending an in-game tell to Sydor, Deluco or myself.

How can players find out more about the KBH guild? What form of communication works best in-game, email, Facebook, Twitter, etc.?

The best ways to find out more about KBH is to head over to our website or to send an in-game message to Kalan, Sydor or Deluco on the Vulkar Highway server.

Thanks again to everyone at Keyboard Heroes, and especially to Kalan and Sydor for helping with this article. I know they are busy enough with work, school, family and finding time to play the game, not to mention running a guild. So, I appreciate them taking time to share more about KBH. If you are looking for a guild and want to have a good time in Warzones, PVP and just some crazy fun…look no further. Give these guys an in-game tell or contact them through their website.