Welcome to a somewhat Special Edition of Force Lore, what would normally be your weekly trip through the histories of Star Wars and the lore of Star Wars: The Old Republic.  Instead of one, you’ve received two!  Today is a special day to celebrate love.  It’s that time of the year where you pull your sweetheart in close and show them just how much you love them.  With that being said, I think we should travel down Lover’s Lane and look at some of the great relationships that have taken place in Star Wars, especially those that affect SWTOR.  Set your navicomputers and let’s make the jump!

Love is in the air, even in the game.  I don’t mean the random encounters that characters can have with certain NPCs throughout SWTOR.  Your hook-ups, if you will.  If you’ve leveled a character up very far, then you know that your character and certain companions can engage in romantic relationships.  What would Star Wars be without romance, right?  And what would our gaming experience be like if some of us didn’t get a chance to share it with that special someone. 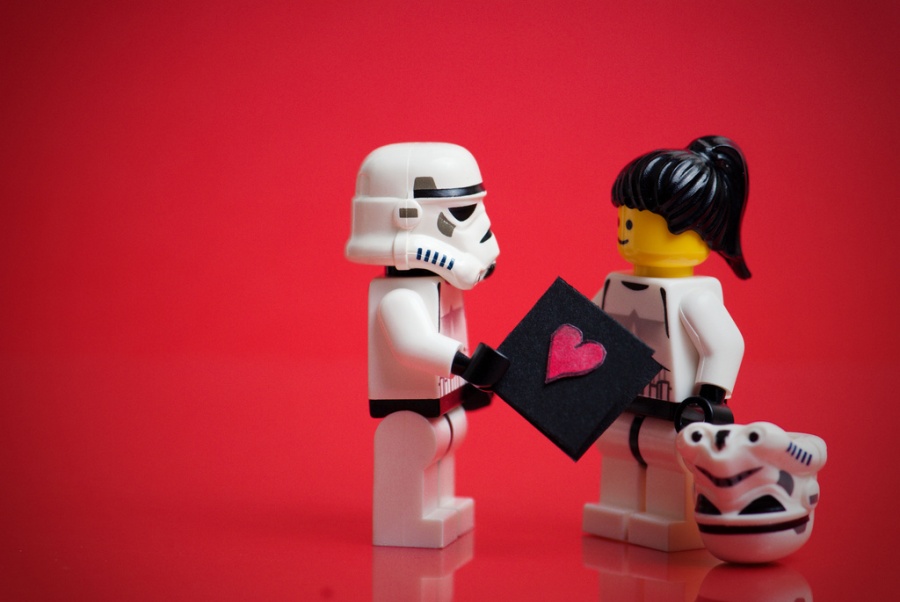 Before Anakin and Padme, Han and Leia, even Luke and Mara, there were others who had relationships while in the galactic spotlight.  Some of those relationships were tragedies, others the things of myth and legend.

Back in the era of the Old Sith War, approximately 4002 BBY (Before the Battle of Yavin), a young, up and coming Jedi trainee by the name of Andur Sunrider met and married a young woman named Nomi Da-Boda.  It was a time when the Jedi trained their padawans on a very independent basis.  The Jedi Council didn’t have much say over who a master took as a student or how many students they trained at once.  The Sunriders were an exception to the Jedi rule barring relationships/attachments since they were married prior to the start of Jedi training.  Andur and Nomi lived a quiet life, with Andur training to become a Jedi Knight, like his grandfather.  The couple would go on to have a daughter, Vima.  Unfortunately, Andur would not see his wife or daughter go on to become two legendary Jedi, as he was killed shortly before Nomi began training as a Jedi, herself.  Check out “The Tales of the Jedi” series from Darkhorse Comics for more on Nomi and the other Sunriders.

A little closer to the time of SWTOR, the events of Knights of the OldRepublicseries showed another great relationship.  This one would have an effect on our new MMO game.  Revan and Bastila Shan.  Revan who had fallen to the Dark Side and had his mind wiped, to be redeemed and Shan, who would never give up hope on him returning to the Light Side.  These two would eventually fall in love and marry, going against the Jedi even more, considering that Revan had caused the recent Jedi Civil War.  Bastila and Revan would be one of the exceptions within the Jedi Order due to their celebrity status amongst the Jedi and the Republic.  They would go on to have a son, who must have either not been Jedi or not very noteworthy, as the Shan family name continued on up to and after Satele Shan, current Grand Master of the Jedi in SWTOR.  (SPOILER: Satele had a son at some point, showing that she also broke Jedi code.  Theron Shan was a spy for the Republic that was born some time during the Great Galactic War/Cold War era.  Any lectures from Satele about being mindful of emotions should be taken with more than one grain of salt.)

Now that we’ve brought up Satele Shan, we can move into SWTOR romance territory.  The one that sticks out throughout two of the game trailers is Veradun and Eleena Daru.  Who?  Oh yes… players of the Sith Empire faction may know Veradun better by his newer moniker, Darth Malgus.  The Malgus/Eleena story parallels the Sith Warrior story a bit when it comes to romance.  Malgus took a young Twi’lek slave as his own, one Eleena Daru, on Geonosis.  The two would fall in love.  Eleena fought side-by-side with Malgus through the Great Galactic War, especially during the sacking of Coruscant, where she was one of two individuals to back him up upon entering theJediTempleuntil the shuttle of Sith Warriors crashed into the building.  Their relationship would continue on, with Eleena acting as an extension of Malgus until she was attacked by a Jedi on Coruscant.  Malgus killed her after the battle, stating she was his biggest weakness.  The loss of Eleena would fill the Sith Lord with rage over her death, in fact enhancing his power.  As it turned out; Eleena was his biggest strength, even in death.

If we move on, past the SWTOR timeline, there are assortments of romances that occur.  Most notable is the relationship of Anakin and Padme in the prequels.  If you’re to follow the storyline from start to finish, without those two and their relationship, we wouldn’t have much of a Star Wars Universe, especially the Expanded Universe.  We know that Han Solo and Leia Organa do eventually cement their relationship at the end of Star Wars Episode VI: Return of the Jedi.  But did you know that they go on to marry and have three children of their own?  These events take place during the years following the Battle of Endor.  Let’s not forget Luke.  Mr. Whiny Skywalker grows up in the books and comics following Return of the Jedi, becoming first Jedi Master Luke Skywalker, then Grand Master Skywalker.  Seems like he had to mature and get a good job before he finally attracted a woman that would marry him.  Who is this woman?  Mara Jade, a former assassin and Emperor’s Hand, trained by Emperor Palpatine to kill Skywalker would eventually fall for the Tatoonie farmboy and marry him.  And yes, they do go on to have a child too, named after Obi-wan… Ben Skywalker. 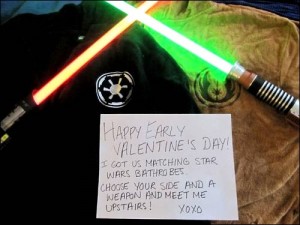 I’ve covered a few of the relationships in Star Wars, but what about real life relationships that cross over into the game?  How many of you readers play with your significant others?  My wife and I have been playing MMOs for about the last 6 years together.  Although we really have never had our characters “hook up” in the game, we have joked about it on occasions, especially with various emotes flying back and forth during lulls in a Raid/Ops group.  I did name my dragon mount that I bought after achieving Lore Master in honor of her, since she was so helpful in getting to that milestone, in another game we played.  While it wasn’t an official in-game name, my UI always showed the name “Kourastraza” when I moused over the macro-button I made.  It was just a RP geeky honor I did with my character’s story that was floating in my head.  My wife did think it was pretty cool though.  Trying to not be distorted here: Do you and your partner ever discuss how your characters may be related or do you role-play through your characters to make your own “Anakin and Padme” moments?  The Legacy system could offer the ability for you to have real virtual kids descend from your original character(s).  I’d love to hear about any stories you may have in the comments section on that.  Just please, keep it G-rated.

So this Valentine’s Day, as you’re hovering throughKaasCityor Senate District on Coruscant, stop by the Companion Gift Vendor.  Pick up a little something for Vette, Kira, Corso, Talos, or even Kem.  Give them your gift with a big emote of love.  Happy Valentine’s Day, everyone.  We’ll see you next time on Force Lore!  May the Force be with you and your sweatheart, always.