This week we take a look at Nova Squad a guild for the Republic. I came across them through Twitter. They had posted a PVP event and so I wanted to check this guild out. What I found was a family friendly guild that loves to have fun. For Nova Squad, this fun comes in many forms, Datacron runs, “Monday Heroes” heroic runs, and much more. After spending some time in their forums and getting to know them, it’s obvious they pride themselves on character; it is a definite strength in this guild. We will find out more about Nova Squad in our Q&A with their guild leader, Hoka.

Was Nova Squad around before SWTOR or created for this game specifically?

We are purely a SWTOR guild. We managed to get started during the early beta and early access windows.

Nova Squad, like most guilds, has a code of conduct can you tell us more about this guild’s idea of proper conduct?

We want to be respected by our server-mates. Our code emphasizes behaving in a way that would maintain our good reputation. In addition, we have a PG rated rule for our entire guild, party and voice communication. Many of us are family and have kids who can read or hear channels. Profanity is not welcome.

Character is a priority I see throughout your guild. How does this translate into a better guild atmosphere and overall gaming experience?

Character is how you behave when no one is looking. The internet is just FULL of trolls and jerkfaces who enjoy being jerks because no one will catch them. By maintaining strong personal character in our players, the guild really benefits. No one in our guild is going to go ape if we wipe on content or if we make a mistake. That really allows players to trust each other. They know their guild will back them up even if something turns out badly. Everyone is cool when things go right. Your friends are there when things go wrong. We actually enjoy when a mistake results in something really amazing. Like getting stuck in the sky or falling to our death on an elevator over and over. (Looking at YOU Cademimu…)

What server can Nova Squad be located and what faction is the guild? Why did your guild choose this server and faction?

We knew from the start we wanted to be Republic. We were assigned to the server by Bioware prior to early access. You can find the Nova Squad on Krayt Dragon server.

I mentioned how I came across the guild, through a tweet about a PVP event. First off, how did the PVP event go? Secondly, has the guild held more events since then or are there more events scheduled in the future for Nova Squad?

We have regular events all the time. They include Heroic missions, level 50 dailies, PVP, FlashPoints and Datacron crawls. We’re starting to mature, level wise, so we’re going to be including Ops for players who want to pursue that.  We had a great time! The PVP event is one of my favorites. It’s great to work together and win a WarZone. It’s also good to groan together when we get drubbed in a match. 🙂 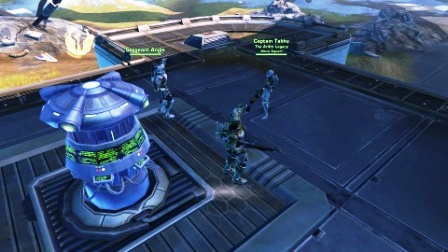 What class are you currently playing now? What advance class did you take, and is this your main character or do you suffer from “alt-disease” like I do?

I went Trooper Vanguard. I really enjoy tanking, as well as the mix of range and melee dps. SWTOR is very good and encourages you to see the story from many different angles. I have a Smuggler Scoundrel alt, but he’s a lower priority.

As of this week, what would you say is Nova Squad’s greatest achievement in the game? What is a future goal for the guild?

I’d say our greatest achievement is our turnout for our events. Nearly every event has at least half the guild participating. If you’re looking for a ‘check list’ I’d say its Datacrons and world bosses. We’ve tackled them all up to Nar Shaddaa at this point. We haven’t tried higher as we try to encourage our leveling characters to take part. Our current future goal is to field Ops groups for the 50s who want to pursue that. We’re in no rush and make no playtime demands on our players. 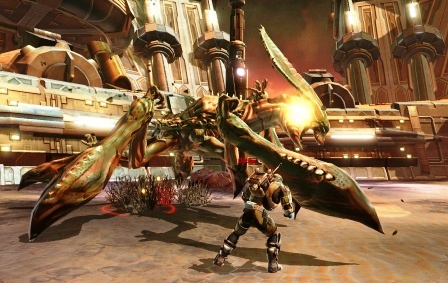 Is Nova Squad currently allied with any other guilds? On the other side, is there a guild that you would consider an adversary?

We have bumped into The Council a strange number of times. We’ve cooperated well every time we’ve met up. Nothing has been coordinated yet, but we’re starting to recognize each other and build on that relationship. They’re a good bunch of people.  I wouldn’t say we have a guild adversary. When we meet Imps, Red = Dead so I don’t usually take the time to notice who I’m fighting.

Speaking of Nova Squad battling Imperials, here is a video from the Alderaan Warzone. Thanks Hoka for supplying the video!

We have just passed the two month time-frame since the game released in early access. How would you rate the game and what are some areas that the game needs to improve?

The game is amazingly good. I don’t have any serious issues with the game as it stands right now.  Areas that need improvement are being able to abandon any quest if you want. Having to backtrack to knock out a grey quest because you can’t abandon it is not fun. I’d also really like to see a feature where you can right-click a guildie’s name and send them a /tell. Lastly, many of us would like alt-spec ability. With companions it’s easy to carry around alternate gear, but without a dual-spec, you have to visit the Skill Mentor to swap between roles if the party needs it.

The next big patch, 1.2, seems to have a lot of guild features. Are you excited to see Bioware listen to the community and address some of the needs, especially for guilds? What are your thoughts on the Guild Summit?

The Guild summit is exciting. We have a guild member who lives in Austin and could go. We are currently on the ‘wait list’ and I don’t hold out hopes that we’ll have a representative there.  We’re very excited to hear from the developers about guild banks and possibly guild capital ships!

Is Nova Squad currently recruiting? If so how can potential recruits get in touch with the guild? Are there specific classes and advance classes you are looking for in future recruits?

Recruiting: Yes! We have a good player base now, but we’re looking particularly for DPS right now. However, we take players of any class or level, so long as they are friendship focused rather than ‘progression’ or ‘gear’ focused. We have a great website and anyone is welcome to apply.

How can folks follow the guild or correspond with Nova Squad to maybe take part in an event etc.? Players are encouraged to follow us on Twitter @nova_squad, follow our website, or message me (Hoka) or our officers (Khasper, Axecell, Torvasse) in game on the Krayt Dragon server.

That wraps up another Guild Checkpoint for this week. I want thank Hoka for all of the help with this week’s article. I also want to send shout outs to all the members of Nova Squad for making me feel welcome on their forum site, especially those posting the great screenshots. I might have to roll a character on Krayt Dragon to stay in touch 🙂

Are you in a guild or a leader in a guild? If so please contact me and see if we can tell the community about your guild. Just submit your guild’s website and some basic information in an email to me at, jason@corellianrun.com. Look forward to highlighting more guilds here at Corellian Run Radio. Thanks and see you next week!