Hello everyone and welcome to yet another episode of Force Lore.  This week, we’re starting to look at the Jedi and Sith.  We’ll touch on what drives each faction and the differences between the two.  Due to the large amount of info on each faction, I’ll have to break this up into a two-parter.

I’m giving a shout out to my nephew and my great nephew this week, both huge Star Wars fans.  My nephew, Derek, was involved in a very serious car accident a while back.  The Force was definitely with him, as he survived and is out of the hospital and at home recovering from injuries that were beyond life-threatening.  I liken it to either a manifestation of the Force that aided him in staying with us and overcoming a mortality rate of 90% or a Jedi Sage hiding in the bushes, providing some heals until he could be taken to the hospital.  Either way, it’s nothing short of a miracle that my family and I have more time with him and he can enjoy more Star Wars with his son, Kristopher.

On with the actual weekly installment!  Get ready and let’s jump onward!

Years ago, the great minds of the galaxy met and shared their knowledge of the mystic energy and power known as the Force on the planet, Tython.  We covered some of that in the article on Tython.  The factions of the Sith and Jedi would blossom out of this meeting.  During the Force Wars on Tython, the followers of the Light Side, or Ashla, formed the group that would become the Jedi.  Those who followed the Dark Side, Bogan, would influence future Darksiders, including the Sith. 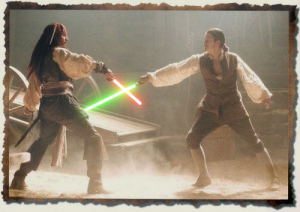 Another Film series made epic by the use of Lightsabers

These were not the only practitioners of the Force that would form in the galaxy.  There are countless others, some who share the ideals of the Sith or Jedi, and others who integrated both beliefs into one.  For the most part, the Jedi and Sith are the most prevalent of the Force-users throughout the known galaxy.  Keep in mind that there is a large area of space that is virtually unexplored in the Star Wars galaxy and that could change with future content.  I doubt it, though.  These two factions of Force-users are what Star Wars is built around.

Developing on Tython, the Je’daii Order was the principle organization that the later Jedi Order would be built from.  This ancient Order was in many ways, similar to what we see today.  More ranks for the members were included, such as Padawan, Ranger, andTempleMaster.  The Jedi of theOldRepublicseem to have scaled the ranks down since that time. Now we see the three main levels within the Jedi Order: Padawan, Knight, and Master.  Some will argue that there are more, but these are the three predominant ranks that are seen.

Since it’s beginning, the Jedi Order has concerned its’ self with the pursuit of knowledge and peace.  The Jedi seek to gain knowledge and understand the Force.  They act out of defense of others and never for personal gain.  The Jedi Order has always appeared to be concerned with defending civilization and being the guardians of peace.  Throughout it’s existence, the Jedi Code has always had the same tenets within its’ mantra:

There is no emotion;

There is no ignorance;

There is no passion;

There is no chaos;

There is no death;

there is the Force.

From the time of theOldRepublicto the days of Darth Krayt’s Sith Empire, the Jedi have adhered to these words.  In print, the “chaos/harmony” line was omitted from the mantra when read at Mara Jade Skywalker’s funeral and from some other Jedi texts that date back to pre-Movie era times.  Otherwise, it is found as it is shown above or in an abbreviated form.

Although this makes the Jedi Order look like a bunch of passive, tree-hugging monks, the Jedi have always prepared themselves to act when the need arises.  During the early days of Star Wars, when Episodes IV, V, and VI came out, we had only the prowess of Luke Skywalker and the aged Obi-wan Kenobi to give us hints as to how the Jedi fought.  Their martial skills were, well, lacking for the most part.  It resembles the styles of fencing mixed with some swashbuckling flare.  This is pretty dull compared to what we see in the prequel Episodes I, II, and III.  Here we see a varying of styles, some more acrobatic and eastern martial arts influenced, while others show a steadfast, western sword-dueling influence.  And to compliment it all, the Jedi from theOldRepublicera used the Force as a weapon: Not to merely affect the environment around them, but to also directly affect their target.  Up until the prequels were released, all source materials concerning the Force used as a weapon were said to be a tenet of the Darkside.  The RPG materials created by West End Games, which were nearly like bibles for the Expanded Universe of Star Wars, cited many examples of this.  This would be retconned later with the release of the new movies, beginning The Phantom Menace.

Able to act in defense and having the knowledge to know when the time was appropriate to act or pursue other avenues of resolving a situation, the Jedi set out to safeguard the worlds within their reach.

The Lightsaber, the primary weapon of the Jedi, has come to be a symbol of the members of the Order.  If it wasn’t for the Jedi, the Sith would be more likely to use their Darkside enhanced Sith blades yet today. 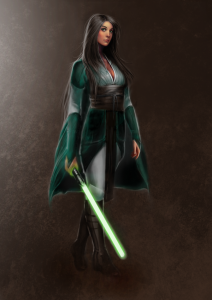 Within the Order, in SWTOR, we see Padawan learners being instructed at the Jedi temple, preparing for the mission of being a guardian of the Republic.  When training with their individual master, a Padawan may often be sent out to perform tasks and missions alone.  Usually, this is reserved for the students that are nearing the end of their training and that are preparing for the trials before becoming Jedi Knights.  Their actions and influence on the galaxy are more from their master’s guidance rather than from their own actions.  A Jedi Knight or Master, on the other hand, has influence on the galaxy through their actions, more independently.  Sometimes, these “independent” individuals are sent by the Jedi Council to places where the need for mediation or defense is asked for.  Most Jedi seize the opportunity for peace and justice on their own and follow the Jedi Code to see a “good” resolution to a situation or crisis.

As players, we get to be these do-gooders in the form of the Jedi Knight or the Jedi Consular.  Each of these is further broke down into two distinct Advanced classes.  For the Jedi Knight, we have the Sentinel and Guardian.  The Consular has the Sage and the Shadow.  Each Advanced class, while following the code, fulfills a role within the Jedi Order. 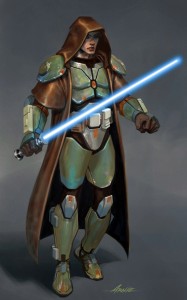 The Jedi Knight is the true symbol of hope and justice within the Republic for the Jedi Order.  The Knight is the steadfast figurehead of the Order, responding when needed and quick to defend.  In the game, the Jedi Knight Advanced Classes fulfill the role of melee damage dealer or main/off tank.  It is also rumored that for the Republic storyline, as a whole, the Knight is more or less the star of the story…

The prophesized savior of the galaxy against the tyranny of the Sith and other evils.  The Knight is adept at combat and a powerful defender against evil, either standing up to punishing damage or striking quickly with dual weapons.  The Lightsaber is the primary weapon of attack for the Knight classes.  The Knight classes rely more on “up close, in your face” combat and is not known for their ranged attacks.  Examples of the Knight are Anakin and Luke Skywalker.

The Consular, on the other hand, shows more control over the Force when it comes to affecting the environment, especially from a ranged perspective.  The Advanced Classes differ a lot from each other, more so than the Knight.  The Sage is a master of the Force, using the art of telekinesis and often times, healing, to fill the role that the Knights are lacking in.  They focus on ranged use of the Force rather than melee styles.  Don’t get me wrong, though.  A Sage can still whip out some saber skills if needed.  The other half of the AC, the Shadow is the secretive, assassin-like, arm of the Order.  While it may be a bit of a contradiction to the Code, the Jedi recognize the need to act in more “discreet” ways sometimes.  Like the Knight classes, the Shadow is specialized in close and personal combat styles.  A melee damage class, the Shadow can perform like a Rogue from another un-named game, or can fill in as a off tank easily. 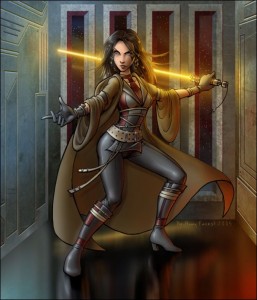 With all this said, the Jedi are a shining beacon of light, justice, and hope during the dark times of the galaxy.

Next week we’ll look at how the Sith parallel the Jedi, except in a very dark, power-hungry state-of-mind.  Until then, as always, “May the Force be with you.”