Bioware has already put so much into the upcoming new Patch 1.2: Guild Banks, UI customization, Legacy System, a new Operation, a new Warzone, and several fixes or changes with crafting and PVP. If that was not enough, they have announced a brand new mini-game for Patch 1.2. 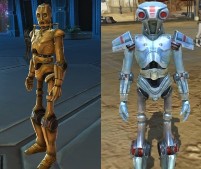 The new mini-game will be called Ship Droid. This mini-game will have several features to bring a whole new aspect of fun to SWTOR. In Ship Droid, you will be able to assume the role of your ship’s droid and carry out various tasks that will earn XP and Etiquette Points. For more details, please check out the official news release from Bioware. These tasks highlighted in the videos below can have a significant impact on life aboard your starship.

What do you think of the new mini-game? How will you play the role of your in Ship Droid? Let us know your thoughts below in the comment section.

More news to come about Patch 1.2 until it is released live, so please enjoy the remaining moments of the first day in April. 😉