Is it the destination or the journey that is the best part of a trip, game etc.? In this day and age of need it now, it sometimes is hard to relax and enjoy the journey. This week’s guild, Cabal strives to do just that by focusing on having fun and being social. Do they still take down Flashpoints, thrive in Warzones and eliminate bosses in Operations…yes! They just choose to enjoy the journey, even bringing back the nostalgia ideas of pen and paper days of role-playing games.

More about Cabal, as we meet their GM Naira after the Jump…

(Get my role-play on)

/sits down in the cantina booth across from Naira

/greets Naira and begins the interview

How did Cabal get its start as a SWTOR guild?

Cabal got its start in SWTOR as Cabal members came together and started it…Games – WOW, EVE and DAOC.

What faction is your guild? What type of server and name is Cabal located?

– Republic on The Progenitor RP/PVE server.

As a RP guild, even light role-play, how have you incorporated your guild name into your backstory?

– “Cabal” is a secret group, operating out of the shadows of both the Republic Senate and the Jedi Council, working against the Empire, but circumventing all the red-tape and taking more direct action, where the Senate and the Council cannot act without putting strain on the already fragile “cease-fire”. Our operations can’t be traced back to either the Senate or the Council, as we operate outside their knowledge. “Cabal” denotes a secret group or even society, which works nicely for our back story.

What is the guild’s philosophy about RP (Role-Play)? How does the guild use it for planned events and other game aspects?

-RP is part of what makes a game more interesting. Looking at ANY MMO/MMORPG out there, if you don’t take the initiative to do something interesting yourself, it all just boils down to killing things, escorting NPC’s and getting gear, XP and levels. RP brings another aspect to the game, for those interested. RP allows you to expand your experience, and in the case of SWTOR, allows you to dig in and really experience a more personal Star Wars story in a graphic representation of the SW universe. Some of us have played the Pen and paper version of the game, and imagination works well, but actually seeing someone draw a lightsaber or hear a blaster pistol being fired, the sound of the cantina band… and being able to stand in front of a Hutt, discussing a failed smuggling mission while a Bounty Hunter is keeping his blaster trained on you…Priceless.

Our Guild has some weekly RP events, one being in the “Dealers Den Cantina” on Coruscant every Thursday night, called R&R Thursday. It allows not only our guild, but others as well to join in and experience RP, even develop storylines and sometimes even using it as a base to start an RP adventure. 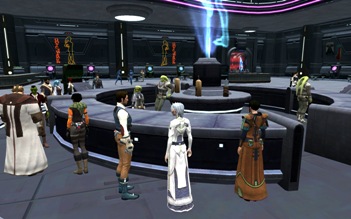 We are also planning on implementing RP into some PVE oriented scenarios, such as Flashpoints, etc.

How has the RP community, especially your guild, looked at Bioware’s focus on story? Do you all think it has helped bring more people to role-play?

-I think it helps a lot, actually. I think it creates a bridge that hasn’t been there before, for many people who aren’t used to regular RP in its pen & paper form or in a computer game. I think it has opened a lot more people up to the possibilities. Story is something I have seen a lot of games “try” to implement in the past, but it just becomes to “generic”. In Bioware’s case, I think they have gone the extra mile to make it a more unique experience for players. There are limitations to how much they can do, but I think BW did an absolutely amazing job. It gives the game an extra drive, a reason to continue playing, if you will, where other games leave you hanging doing the same missions/quests as everyone else, every time you are leveling up your character, despite class.

Now your guild is not just into RP, it also embraces all other segments of the game. How has Cabal struck a balance in these other areas like, Warzones, Flashpoints, and Operations?

– Cabal has always been about embracing all aspects of any game. We have people who enjoy some of the categories exclusively and some that embrace them all. We also offer mentoring in the different aspects of the game. For RP, we have people who offer advice and help in creating background stories, interactions, etc. Same goes for PVP and PVE, teaching people how the different WZ’s work, tactics for Flashpoints and Operations. Granted, we haven’t started Operations yet, but we have members who have experience and are ready to share.

Like most every guild, you have rules. What sort of added rules or etiquette is practiced by the guild and looked for in potential recruits?

– Generally we ask members to show respect and be patient, helpful and never insult other players (this includes PVP). All guild members are expected to act maturely. You can be mature and still have fun.

As far as Role-play rules we are always IC (In Character) in /s and try to lean towards emoting (using in-game emotes or even typing what our characters are doing by typing /e <action>) instead of using smileys, etc. Some of our members are not into RP and we ask that they just respect those that are. 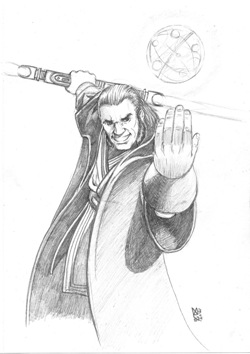 Speaking of recruits, is Cabal currently recruiting? If so are there specific classes or advance classes you need?

– We accept all types of players from all parts of the world and come from a wide gaming background. We are recruiting future long term gaming buddies, from any class/level with a variety of play styles; from the newest member that only has a few hours between work, kids, and time machine building, to the all-nighter who is just looking for a home.

What is your current level, class/advance class of your main character? With the new Patch 1.2 have you also planned out alts or had you already made some?

– My highest level character is a level 50 Jedi Knight Guardian Tank, though I consider my lvl 34 Jedi Consular Shadow to be my main. As for planning out alts, I have already made and played all of them. The only class I haven’t tried yet is a Jedi Consular Sage, which will likely be filling my final character slot on the server.

The Legacy System has its Family Tree for your characters. Does the guild see this as another way of bringing a visual aspect to role-play to this MMO?

-It’s still early, but I do see a potential RP element there. Not only on a personal level, but also something that can be built upon by weaving together stories with other players and actually using the family tree as a sort of planning tool. I am sure our RP heavy members have thought this through a lot more thoroughly, hehe.

Have you and the guild had a chance to try any of the new content in Patch 1.2…Novare Coast, Lost Island, or Explosive Conflict? If so what has the guild thought of the added content?

– As far as I know, no, we haven’t had the chance to explore the newest content yet. Some of us were hit with the “15min window” issue the other day, where people would have to download the entire client to be able to play. As there has been a lot of downtime for some of us due to this and patching downtime, it’s hard to say. We are, however, looking forward to try it.

If someone is interested in joining Cabal or possibly contacting you all for a RP event, what is the best way to reach you?

– Well, we accept guild applications via our guild forum located on the recruitment part of our website, for those interested in joining Cabal. Be sure to check out the other areas of our website also.

For RP events, it is easy enough to contact Xyliana or Naira “in-game”, or even just do a /who and search for the guild name and contact any member that is online. They should quickly put you in touch with someone that can help out.

Thanks to Cabal’s officer Xyliana and their Guildmaster Naira for all their help with the article. Also huge thanks and shout out to all the members of Cabal for letting us learn more about their guild and showing us that numbers or even playstyle makes a guild…it is working together to have fun whether that is PVE, PVP or Role-Play. Naira also helped with allowing us to use some of his artwork. If you like the artwork, be sure to look for more Thursday in HoloNet Links. We will be interviewing Naira about his artwork and how it all got started.

Does your guild have a unique way of playing SWTOR or something that sets your guild apart from the rest? Let us all hear it! So if are you in a guild or a leader in a guild, why not contact me and see if we can tell the community about what you all are doing. Just submit your guild’s website and some basic information in an email to me at, jason@corellianrun.com. Look forward to highlighting more guilds here at Corellian Run Radio. Thanks and see you next week!