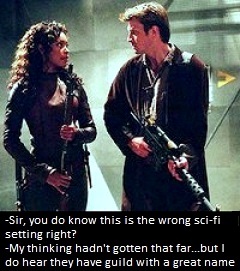 Meanings of words can be found in dictionaries, manuals or similar sources, but they can also be derived from association to a given feeling, memory or other personal experiences. Take for instance the name of this week’s guild, Serenity, it probably already has given you several different thoughts on the word. For me it happens to be a peaceful feeling and a particular starship. We will look at how the guild Serenity got its name, but more importantly how it allows them to keep a “peaceful” feeling in the guild while being highly competitive.

Welcome to Guild Checkpoint. Can you tell us about you and who all is helping with answering the questions?

Joda – Guild Leader of Serenity, I am a 26 year old Marine Corps veteran and currently in school to become a Registered Nurse. I have been playing MMOs since 2004 and love everything about Star Wars!

How did Serenity get its start as a guild? Okay for major cool factor points, well at least in my book, does the guild Serenity, have roots to its name or even premise with the sci-fi series “Firefly?” (I had to ask)

(JODA) Partially!  People always ask us that question, but the guild name was only partially influenced by it. It was a combination of the word “Serenity” being in the Jedi Code and the sci-fi series. Serenity was started in March of 2011 with the idea of creating a competitive environment with family values.

What faction, server name and type of server does Serenity call home?

(JODA) We are a Republic guild on an east coast PVP server called Helm of Graush.

Serenity is a part of a Republic guild alliance correct? How did the Alliance get started? Besides “ganking” Imperials (see video below), what other events do the Alliance members take part in?

(JODA) Initially, Serenity and Academy of Republic formed up to share a teamspeak server and to help each other keep the guild recruitment threads bumped during pre-launch. Our relationship continued to develop while pre-gaming with each other in various games.  Later on, we decided that we wanted to add another like-minded guild called Republic Special Forces. Our Alliance Nights, which occur at least once a month, are open ended player created events that are intended to keep our players active and social.  So far, our events include man hunts, zerg ganking, and various tournaments in Outlaw’s Den.


PVP is always a hot topic in gaming, especially the MMO genre. How do you think Bioware is doing with PVP in SWTOR? Do you think some of the changes in Patch 1.2 have helped?

(JODA) Bioware has a lot of work to do with PVP, especially in regards to resurrecting Open World PVP. The incoming addition of Rated Warzones will help, but Bioware needs to take a look at what Guild Wars 2 is doing with World vs. World (Server vs. Server). As far as Patch 1.2, new content such as a new Warzone and new War Hero gear is always great.

Ranked Warzones had to be pulled, according to Daniel Erickson because it just wasn’t ready. First, how did you are Serenity take the news about Ranked Warzones? Do you think it was the right call to pull that content out of the patch?

(JODA) Fortunately for us, our main priority is competitive raid progression. We did have two Rated teams ready to go, but we were not going to start focusing on that aspect of the game for another couple of weeks. I standby Bioware’s decision to pull that content if it is not ready. However, pulling it out hours before the Patch was not a wise decision. Bioware should have let the community know more in advance.

Now just because your guild is on a PVP server that is not all you all do, what other things does Serenity view as high priorities and/goals in SWTOR? Serenity really prides itself in Operations, what are some of the major accomplishments/achievements for the guild in this regard?

(JODA) Our main priority is to have fun of course! With that being said, we do have a core of competitive players in both PVE and PVP, so we push to compete in both. Since launch, Serenity has attained 8 of the 12 server first Nightmare achievements, including server first Infernal and Unyielding titles. In regards to the newer content, Explosive Conflict, Serenity has also taken 3 of the 4 server first Hardmode boss kills. 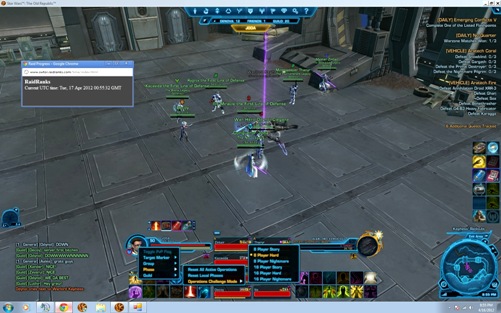 I am correct when I say that your guild is currently ranked for your 8man team right? Which Operation and how is this determined for all of us, me, who are not the hardcore OP type?

(JODA) Yes, we are currently ranked number 6 in the world for Hardmode Explosive Conflict (8 man). This is determined by the RaidRank website which requires guilds to register their kills with time stamped screenshots or videos. In addition, we run three 8 man raid groups, vice 16s, at various times to make it easier for our players to schedule their playtime around their real life.

What is your main character’s level, class & advance class? How are you enjoying the Legacy system? Have you fallen to the alt syndrome lol?

(JODA) I play a level 50 Balance Sage, but off spec to Seer if heals are needed. I love the Legacy system, especially its potential in future content patches. I am starting to roll alts to get their class buffs for my main, but this could be a dangerous path if I start to gain too much curiosity for the amazing story lines 🙂

Speaking of syndromes or conditions, what has the guild thought of the in-game event dealing with the Rakghoul Epidemic? Has Bioware done a good job with this event? Would Serenity like to see Bioware continue to have these types of in-game events?

(JODA) It is by no means an amazing or innovative event, but it is another potentially fun feature of the game that Bioware can improve on or expand in the future. We would definitely like to see it more often and on different planets. For those of us who don’t go exploring the planets on our own, it gives us more of an incentive to go. Sometimes you have to force players out of the Fleet so that they can enjoy the rest of the galaxy!

Is Serenity currently looking to add new members? Are there specific classes/advance classes the guild needs?

(JODA) Yes, Serenity is currently recruiting Vanguard (dps) and Smugglers of all type. Our allied guilds, AoR and RSF, are also recruiting all exceptional, social, and fun loving players.

How can people get in contact with the guild to apply or learn more about Serenity? How should guilds or players get in touch with you or the guild about events like Open World PVP “raids?”

Now before everyone rushes off, Serenity also works on a side project. It is a video podcast. In this members of the guild read through fan fiction, almost like a radio drama style. Just another way this guild works hard on endgame progression, but has plenty of outlets for fun. Here is a trailer for first episode of the Galactic Chronicles. Be sure to check out the full length episode.

Thanks to Joda, Serenity’s Guild leader, for all his help with this article. I would also like to thank the rest of the guild Serenity for opening up their guild and forums to help me share their guild with the community. If you are looking for a guild that is constantly looking to be at the top of progression in SWTOR and still have fun events like raiding the other faction’s bases, I urge you to get in touch with the members of Serenity.

Does your guild take endgame content very serious, or maybe your guild is one that enjoys Open World PVP events setup in Outlaws’ Den? Let us tell the community about your guild and what your guild does better or different than maybe some of the others. All you need to do is email me at jason@corellianrun.com along with your guild’s website address and we will see if we can get your guild highlighted on Guild Checkpoint at Corellian Run Radio.