Through this article and website, I have had the great privilege of meeting some amazing guilds, full of creative and talented folks all with one thing in common…enjoying Star Wars: The Old Republic. This week is no exception. Dugra, an officer in the Demonic Sith Lords, emailed me about highlighting their guild. I have to admit, seeing the word demonic in the name had me raise an eyebrow. However, I went about checking out their guild and they are really a great bunch of folks…even if they are the anti-“fluffy” named guild. As we will find out they love playing this game and having fun, especially when they are extinguishing those on the light side.

Before we get into the interview, here is another look at one of the creatively “dark sided” members in DSL. Glidingdragon created this video through editing cinematics and combining the voice from the Deceived audio book and if you pay attention to the ending there is an audio clip from Knights of The Old Republic.

How did DSL get its start? Is this the only game the guild is playing?

We first met in another guild from the same server. Lolita, Keiarra, Zena, Fulliz and I ran together all the time. We moved through the ranks to officers and were in charge of doing guild runs and other activities. We decided that even though we did like being in a large guild and enjoyed putting activities together why not try it on our own and create more of a unionized guild. We decided to take the plunge and venture out on our own to build the Demonic Sith Lords and create a more democratic guild. At the moment this is the only game ourselves and our members play.

What faction, server and type of server are associate with Demonic Sith Lords?

We play for the Empire on a PVE server called Icebreaker. However for those that like to switch it up a bit and try something different we have a Republic guild on the same server, however that is not a main focus for now.

As a fairly new and smaller guild, how has would you describe the guild creation process in SWTOR compared to other games? Are there some areas you think Bioware can help guilds with some improvements?

The guild creation was easy as it is in most MMORPG’s. The hard part was that our server is a small one to begin with and there are two large guilds that dominate our server for now. So getting new people to join can be a difficult task. However we feel that we have really lucked out so far in recruiting dedicated members’ that fit in well with our criteria. I would like to see Bioware add some guild navigation options, so new players can see what guilds are on the server and what type of guild they are so it’ll be easier for them to find their perfect fit and since we don’t have macros we can keep from spamming too much in trade chat. That gets kind of annoying.

With a somewhat “ominous” guild name, is there a backstory to the name? Does your guild tend to play more towards the “Dark” side when making in-game choices?

There really isn’t a back story to us choosing our guild name. Of course since we play more towards the dark side we wanted to pick a name that would fit that. We love the dark side and if you’re busy slaying a light side player you want them to know exactly what side we represent and a cute fluffy name doesn’t exactly go well with that.

What has the guild been doing to attract new members? Does the guild hold in-game events? If so what type of events and how have they gone over with the members of DSL?

Well I think we have a couple of things going for us that attracts new members. One being the fact that we have our own website that is always updated and our members’ interact with each other, and the other being we have vent that is always being used and it’s a lot easier for our members to get to know each other and which players they would like to do more activities with. We do hold in-game contests for our members. We just finished a contest where we asked members to create a guild logo picture. We had them post it on our site and the one that had the most likes won 200k in credits. It was a great opportunity for members to get involved and show they’re creativity. It was also a chance for the guild leaders to see who is more artistically inclined. So that if we want to get more guild art out there we know who has the passion for it. We’ve had all kinds of ideas including naked fist fighting, and who can get the most “purple” loot from drops and gathering missions. You can always see what new contests or events we have going on our website. 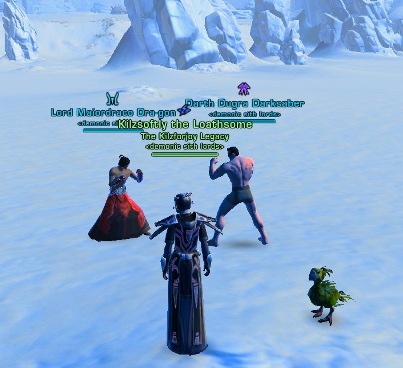 Are there areas in SWTOR that it helps being a smaller guild? Have there been any situations where smaller numbers have hurt your guild?

Being a smaller guild has its pros and cons like with everything in game. The pro being since we are a small guild it’s very easy for new members to really get to know older ones and that we can have easier interactions and conversations with each other. I think the biggest thing we have going for ourselves is that we are very social and inviting to all. No matter what your rank or level everyone is treated like a friend. The downside of being small is that it’s harder to get same lvl ops, flash points and high level world boss runs together. We pride ourselves in being fair and doing things for all levels, but when it comes time to do higher level things we sometimes come up a man or 2 short.

In your forums, one member has started a class guide for Sith Inquisitors – Sorcs. Is this something the guild is going to try to get for every class, advance and roles?

That project was started by one of our newest member Kilzsoftly. Who has since been promoted to an officer in the short time she has been with us. She came up with the idea to making class builds and rotations even more accessible for our members. We realize that just because you can play an internet based game not everyone is internet savvy, so why not cut out the guess work or “googling” and put all the information members need on our site.

How would you describe your guild to potential new members looking for a Sith guild? What are some of the rules and requirements of members? 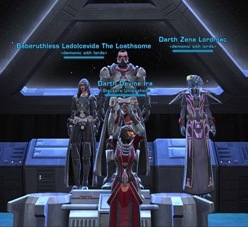 Demonic Sith Lords is a very laid back guild that combines being social with being a hardcore player. We are an adult (18 and up) drama free guild that prides ourselves in treating all with respect and courtesy. We all have lives outside of the game and know that playing games is a way to relieve stress for some. So why not come to comfortable place and beat the crap out of monsters and other players in a healthy and safe environment. We help each other out in game and are there if people need to vent about their day. However we are not babysitters and are not responsible for others happiness or advancement in game. We all started from the bottom and while some help is available to our members it’s important for them to also be independent in all in-game aspects, such as making money, crafting and leveling.

What is your main character’s class, advance class and level? Have you enjoyed your character’s storyline? Do you find the class stories refreshing to the MMO genre? Have you started getting your Legacy benefits unlocked? 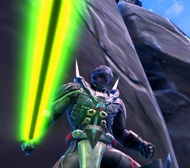 I am a lvl 50 Sith warrior tank spec, The warrior story line was fantastic kept me on my toes the entire way through when I wanted to take a break the story just kept pulling me back to see what happened next, I have unlocked all of my legacy benefits having the credits to afford them is not the easy part, From what I have heard and seen all the class story line has had people making alts to see all the story lines and the sweet justice at the end of all the story lines.

Story content mixed in with hard core star wars fans. Well more content maybe some better realistic graphics, more guild perks like buffs or even guild ships that we can host guild meetings in etc. Other than that Bioware has done a terrific job at making this game and they are keeping up with problems in the game.

Is Demonic Sith Lords recruiting? Are there specific classes or advance classes the guild needs? If so how is the best way to contact and/or apply to the guild?

Well this was an easy question! Lol The answer is yes we are always looking to add to our guild and to be one of the best ran guilds on ICE BREAKER. We do need more DPS and healers but all are welcome. We are doing a lot of exciting stuff for our members and content. We have officers on most times, and players are more than welcomed to contact Dugra, Dreadmac, Lolita, Zena or Kilzsoftly. You can also check us out at our website and use our application to apply for the guild. 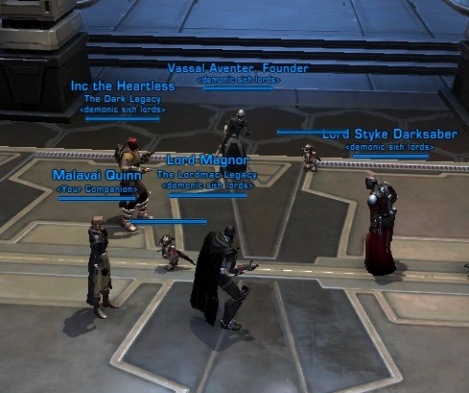 Ever dance with the Devil...You can boogey with DSL. Apply today

I want to thank all of the members of the Demonic Sith Lords, especially Dugra for all his help and sharing their guild with us here on Guild Checkpoint. He and the entire guild were gracious enough to welcome me in their website…even if it was a bit “dark” lol. I appreciate the guild helping get the needed info for the article. All the best to the members of Demonic Sith Lords!

Are you in a guild or a leader in a guild and would like to share it with the community? If so please contact me and see if we can tell the community about your guild. Just like Dugra, from this week’s guild, did submit your guild’s website and some basic information in an email to me at, jason@corellianrun.com. Look forward to highlighting more guilds here at Corellian Run Radio. Thanks and see you next week!