Welcome to the war, comrades. You have been selected to receive the latest training and tactics fresh from the warfront. The tried-and-true strategies you are about to hear are extremely effective and CLASSIFIED. Let’s get to the briefing. Today we are talking about gearing up for battle.

One of the biggest factors in your performance in any part of the game is the gear that you wear. With regards to PvP, the gear progression is very straightforward, and there is a predictable amount of grind. This will be a two-part post, with this week’s focus is on the initial gearing-up process. Next week we will complete our look at PvP gear with Exhumed gear, Dark Reaver gear, Augments, Color Crystals, and more! Check out Part 2 here!

Gear currently comes in two tiers of quality, with eleven more additional outdated tiers that might still be sitting in your inventory from pre-Patch 2.0. The current tiers are Exhumed and Dark Reaver. The old eleven tiers that are inferior to the current tiers, are Centurion, Champion, Recruit MK-1, Recruit MK-2, Battlemaster, War Hero, Elite War Hero, Partisan, Obroan, Conqueror, and Brutalizer.

The two PvP sets are purchased with a variety of different currencies.

The first tier is Exhumed, and this set is purchased with Warzone Commendations.

The best tier is Dark Reaver, and this set is purchased with a combination of Ranked Warzone Commendations and pieces of Exhumed gear. In other words, you must already have the respective Exhumed piece to trade in for the Dark Reaver piece. That being said, for items that are shells, like Head, Chest, Gloves, Legs, Boots, and Mainhand, you can take the mods out and only trade in the shell for the new Dark Reaver piece. This factor will come into play later in next week’s article when we talk about Augments.

Let’s talk about the first two steps to gearing up for PvP. 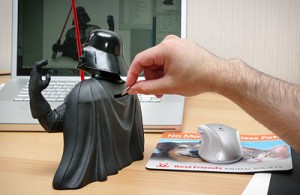 Save those Comms!
Source: www.walyou.com

If you are PvPing your way to level 60, you should start saving your Warzone Commendations ahead of time so you can purchase “the good stuff” the second you hit level 60. You cannot purchase the gear until you reach level 60, so you want to stock up on Commendations before you get there. If you are like me, you will PvP at each level and cap your Valor at that level, i.e. if you are level 25, you cannot go higher than Valor rank 25. Thus, since the earliest you can start purchasing Ranked Warzone Commendations is Valor rank 40, you want to start trading up to Ranked Warzone Comms from regular Warzone Comms at level 40 if you can.

Another method of saving up comms is buy PvP weapons from the PvP weapons vendors for 900 Warzone comms apiece, and sell them back for a refund once you get to level-cap. You have to trade the weapons back in within two hours of in-game time to refresh the timer (it won’t expire while logged out) and then buy them again. If you cycle through them, trading them back in and refreshing the timer each time, you can have thousands of Warzone comms ready to use at level-cap. NOTE: For speed of exchange, turn off “Display Item Modification Warning” under Preferences -> User Interface -> General. 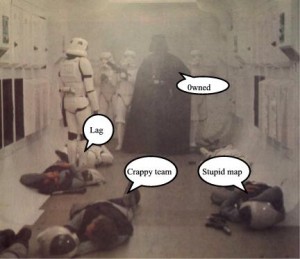 I think it was probably their crappy gear…
Source: www.forumspile.com

Congratulations! You have reached level 60! You have owned the pre-60 warzones in your late 40s and 50s because of all of your extra skills and talents. But now, you officially suck again, back to the bottom of the hover-barge. You are facing off against the top-geared people on your server. Here is what can you do to mitigate the pain, and there will be much pain…

The first thing you should do if you have saved enough Warzone Comms to buy anything is to spend them all on new items at your PvP vendor. If you can do the Dark Reaver Mainhand, awesome. If you can’t, just buy as many Exhumed items as possible.

The Bolster system is designed to give you an even playing field if you don’t have max-level gear. To maximize the Bolster system, try to have up-to-level mods, and don’t ever mix PvP and PvE mods in the same piece of armor. This confuses the heck out of the Bolster system. Make sure to use Power crystals in your weapons until you get Exhumed weapons, as well. Get the matrix cube, as that will be a good boost until you get Dark Reaver relics. It also gets full expertise values with Bolster.

In my next article, I will finish the discussion of PvP gear with gearing up Exhumed, Dark Reaver, and beyond.