Welcome to the war, comrades. You have been selected to receive the latest training and tactics fresh from the warfront. The tried-and-true strategies you are about to hear are extremely effective and CLASSIFIED. Let’s get to the briefing. Today we are continuing the discussion we started last week about gearing up for battle.

Last week, we talked about getting into the swing of the PvP gear progression. This week we will expand that discussion with more details on how to obtain the best gear possible. Let’s talk about Exhumed and Dark Reaver gear. 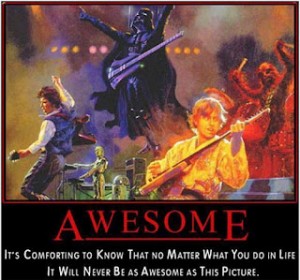 This picture actually has nothing to do with this article,
but it is just too awesome to NOT use…
…oh wait! Finally having Dark Reaver gear is awesome!
A stretch? Maybe…

As you gain your Warzone Commendations from regular Warzones, the first thing you want to do is make sure you purchase the right Exhumed-level gear. Some classes, like Sentinels and Gunslingers, have multiple DPS sets with different stats. You might want to mix and match which ones you get, since the set bonuses all count. For example, a Gunslinger might want to buy the Exhumed Professional’s Boots, but the Exhumed Field Tech’s Jacket. Both will count towards the set bonus, but they might have the optimal stats. Always check the Dark Reaver version for that piece, since Professional can only be upgraded to Professional, and so forth. For classes that have tank or healing roles, you will have a certain set of DPS gear, and that is the set to get.

Purchase your Mainhand first for 1250 Warzone Comms, if you haven’t already purchased the Dark Reaver Mainhand.

Next, get your Offhand for another 1250 Warzone Comms.

Then save up for your Chest, Legs, Head, Gloves (all 1000 each), Belt, Bracers (600 each), and Boots (1000 again), in that order. The reason I would suggest that order is because of the set bonus. Since we have 6-piece set bonuses now, and the Belt and Bracers contribute to that, put off getting the Boots until after you complete your set bonus with the two cheaper pieces. The Expertise, Armor, etc. are all better on the Chest, Legs, and Head than the other two 1000-Comm pieces, so I would recommend getting them first.

Finally, get your Relics, Implants, and Earpiece. It is 700 for each Relic, 800 for each Implant and the Earpiece.

You can obtain Ranked Warzone Comms three ways now that Ranked Warzones are here. The primary way is to fight in Ranked Arenas, where the usual amount of Comms is awarded, except that they are Ranked Comms instead of regular Comms. This is much faster than the pre-1.3 primary way to obtain them, which was by trading in regular Warzone Comms in a 3:1 ratio for Ranked Comms. You have to be Valor rank 40 to do the trade in method, but it is a dependable way to go about it. The final way to earn Ranked Comms is by completing the Daily and Weekly PvP quests.

A quick note on Dark Reaver versus Exhumed: the Expertise does not increase. The other stats do increase, however.

Always In Motion Is The Future

Dark Reaver armor is an upgrade from Exhumed. In addition, we have to plan for the next set. Here are some things we can do to anticipate the changes that come to our gear sets.

The first thing, and this is important: do not sell your Exhumed or Dark Reaver shells if you move your mods out into new shells. You will need Exhumed shells to trade up to Dark Reaver, and you will need Dark Reaver to trade up to whatever set comes out next. We just had an expansion, which reset the gear paths and made the new sets not require the old ones, so you can make a solid bet that the next set will require Dark Reaver.

The second thing, related to the above issue, is watch how you Augment your items (see below).

The third thing you can do if you have already collected all of your Dark Reaver gear is to stay near the cap on all of your currencies. Keep under the cap by buying Warzone medpacs, adrenals, crystal recipes (if you are an Artificer), PvP crafting boxes for materials, etc. Things I would stay away from if you are not interested in fluff: the speeder, the pets, the credit boxes, and the Lockboxes. The former two are fun, so go for them if you want to, but the latter two are a waste of Commendations.

Augments: How and Where to Use Them

When Augmenting your armor, your Mainhand, and your Offhand, always remove the mods and put them in a new shell before Augmenting the same new shell. If you Augment the original piece, then you will be sad when it is time to trade in your shell for the next tier up, because your Augment slot will be attached to the shell permanently.

NOTE: This next paragraph is no longer true; however, I hope it will be soon.

If you are really interested in your PvP set’s look, then find a friendly Armormech or Synthweaver that is willing to make the orange Custom pieces for you (or do it yourself). You will need to go to the vendor for that armor set and pay 50,000 credits for a box of all the recipes.

For PvP, Tanks, go for Fortitude Augments to stack Endurance. DPS, go for Power or Accuracy Augments. Healers, get Power and Alacrity.

Lightsaber Crystals: Give Me The Glowie! 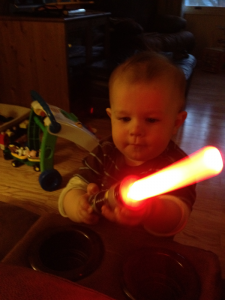 This little guy is fascinated by his new +41 Expertise crystal!
Source: Penny Arcade Forums
(P.S. his parents are raising him right!)

One last thing to consider is the crystal that goes in your Mainhand (and Offhand if you are a dual-wielder). There are several sources of +41 Expertise crystals. The source for some of this information was Dulfy over on MMOMechanics.

One of the current ways to obtain +41 Expertise crystals is from War Hero weapons. The green, red, and orange crystals come stock in Jedi, Sith, and Smuggler/Agent/Trooper/Bounty Hunter weapons, respectively. You can also obtain the red and green crystals straight from the PvP vendor that stands next to the PvP mission terminal for 500 Warzone Commendations each.

Magenta Expertise crystals have not been encountered in-game as of yet.

There are also black-cored red and blue crystals available from the PvP vendor that stands next to the mission terminal, but these will set you back 1950 Warzone Commendations and 150,000 credits.

The black-cored orange crystal can be purchased at the PvP vendor for 200,000 credits, 1500 Ranked Warzone Commendations, and a highest rating of 1500.

The black-cored purple crystal can be purchased at the PvP vendor for 250,000 credits, 3000 Ranked Warzone Commendations, and a highest rating of 2000.

If you pre-ordered SWTOR, then you can visit the pre-order vendor and purchase black-cored yellow crystals for 250,000 credits.

If you bought any SWTOR Razer products, then you can visit the Coruscant/Dromund Kaas mods vendor to purchase the black-cored light green crystal for 250,000 credits. 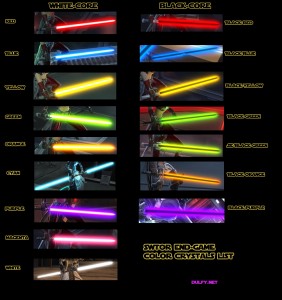 There are now several new dual-color crystals that are available in the Cartel Packs in +41 Expertise. These are difficult to obtain predictably, as it is up to random chance, but check the GTN to see what is available, as people will often sell them.

There are numerous colors available on the Cartel Market, and by extension, the GTN. These crystals can be unlocked via Collections to have as many as you like. Look for the Cartel symbol on them.

UPDATE: The White crystal is now in the Cartel Market, available from the Packs.

One source that is no longer with us is the Geologist that was on the Imperial and Republic Fleets between the patches 1.1.5 and 1.2. He was the sole source of the white crystal. It is reputed that the white crystal will be coming back at some point, but it won’t be as easy as dropping 2.5 million credits at a vendor. Other crystals in lots of colors were also sold there, but alas! The vendor is no longer there.

Another source that is no longer available (and likely won’t be) is the Rakghoul Epidemic event that happened in April 2012. This event had another black-cored green crystal (darker than the Razer version) that came in all varieties of stats, including Expertise. I obtained a pair of these with +41 Expertise for my Sentinel, and I love them dearly, as green is my favorite color. 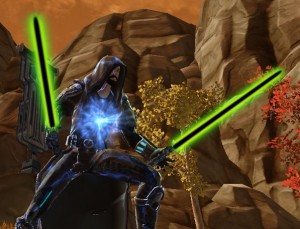 That is about all I have on PvP gearing up! Let me know in the comments if I missed anything, or if you have any alternate ideas for gear progression.