This has been a pretty crazy week in the “real world.” Our thoughts go out to those affected by the tragedy in Aurora, Colorado. It is along this line, I decided to focus on something positive that might just bring a bit of joy. This is all about some newly trained “peace-keepers” in the Force. In an article by Janna Odenthal for the Post-Tribune, she introduces to these new heroes.

More on these new Heroes, Community Q&A & much more after the Jump…

These new heroes in the Force range from those in kindergarten through fifth grade and all part of the Porter County Public Library’s summer reading program. The title of this year’s program was “Dream Big.” The organizer of the event, Kellie Borth, is a huge Star Wars fan and grew up “dreaming” about Star Wars…

“When you’re young, ‘Star Wars’ is dreaming big; it’s your imagination, your epic battles, your heroes. It’s an epic story of good versus evil.”- Kellie Borth via Post-Tribune article 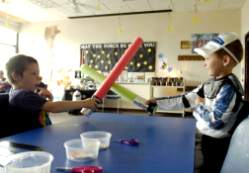 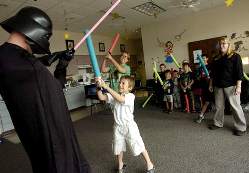 photos in this section via Post-Tribune

The kids got to make lightsabers with materials like duct tape, foam pool noodles, and then they practiced their defensive skills as Star Wars music filled the party atmosphere. Once the “battles” ended, the children listen to the organizer read them a Star Wars book by Heather Scott, Star Wars: The Clone Wars – Jedi in Training.” That seemed a very fitting book as these “younglings” were starting on their path in the Force and more importantly learning how much fun reading can be. All the best to these new Heroes and to people like Kellie Borth for being a positive role model and encourager to kids to strive to “Dream Big.”

Do you currently make videos of your SWTOR gameplay? We are currently looking to possibly add a few video article slots for those gamers out there making class guide videos, PVP tips/guides, and guides for Flashpoints/Operations. We would need all videos to be “family” friendly in language and to keep spoilers to a bare minimum in Flashpoints and Operations…Yes, there are still folks that have not been through all of them yet. Along the lines of PVP, we are also looking to talk to a Ranked PVP team about putting together some video segments. If any of these video opportunities or all are your thing, please email me at jason@corellianrun.com

The Community Q&A blog for the 23rd dealt with various questions from the forum. Below you can read the questions and see the responses from the BioWare staff.

The first question about DPS Campaign gear stats is answered by David Hunt a system designer at BioWare.

“It’s an undesired interaction between the distribution of the mods and the move to set bonuses on the armoring. Future gear provides set mods will use the primary stat over Endurance for all DPS classes.”

Next Austin Peckenpaugh a senior designer at BioWare, answers Achyllis question about resetting all cool downs upon death in PVP. In short, Austin explains that the idea of cool down resets has been discussed, but so far it has always come back as a bad idea.

Now, I am not a huge PVP person, but I know if all my major offensive or defensive skills are on cool down and there is a mechanic in place to automatic reset them upon death…I’m looking for a quick death. Yes, there is a timer to get back in the fight, but it is a small price to pay to get back into the fight with every skill now at my disposal. In fact, you could see a strategy to have part of your team to die just after the doors are breached to better defend the next set. Yes, the cool downs stink, but if you are way out numbered instead of burning all your skills maybe try and pull some of the enemies away from the node or door using basic attacks or those with a short cool down…a taunt perhaps.

Sang asks about how the team decided to work on class balancing with several small patches instead of more time in between patches and larger changes. Once again Austin answers the question. There was originally a set schedule that was used right after launch for when patches/changes would be done. Later the team was able to get the fixes sooner and it seemed to be feasible and positive to have more frequent patches even if small ones.

What are your thoughts on more frequent and smaller patches vs. larger patches less frequent patches? Let us know in the comment section below. 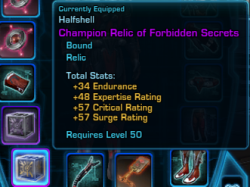 Esendis asks about relics and why it seems the BIS (Best In Slot) for PVE seems to be, to him, as those earned in PVP. Below you can read senior game balance designer, Jason Attard’s answer.

“In the long run our intent is to make sure PvP gear is never competitive in end-game PvE situations. Unfortunately, it’s still too early in the design process for us to give an ETA or release any details on what we’re planning for PvP gear.

We currently have no plans to change the PvE relics. In theory the active abilities on the PvE relics do not provide quite as much sustained damage-per-second as a passive relic at the same item level. In practice, when used at the correct time they can deliver a huge amount of damage when you actually need it, and can make you much more effective overall. This is especially true when the relic is paired with powerful cooldowns or burst damage attacks. This is the primary reason we changed the PvP relics into passive relics, as skilled players could wipe out their opponents much more quickly than intended, and nobody likes to be killed before they get a chance to fight back. On the PvE side we decided to keep that extra bit of gameplay, since it helps break up rotations and adds a extra little optimization element to damage dealing in boss fights.”

The question for the July 23rd Q&A is of personal interest as an Artifice crafter. Dyronis asks whether BioWare has any plans to make crystals like Purple, Cyan, & White craft-able by those in the Artifice crew skill. Jason also answers this one. He states that there are no new plans to make these craft-able. They want to keep these an elite and rare crystal to obtain. He did hint that “if” we introduce new schematics for lightsabers…I am going to focus on the positive that they are even considering adding new schematics!

The known in-game issues thread was updated July 24th, 2012. There is quite a list of known issues. I have personally experienced the bug of Jaesa’s lightsaber beam remaining even after she has been dismissed. It is a minor bug and not game breaking, but it does get annoying. Make sure you take some time and read through all of these known issues. Besides listing the bugs, the dev team has listed some workarounds for some of these issues. In my opinion it is a worthwhile read to find out these workarounds…not to mention to know they are aware of them and are working on clearing them up as soon as they can. 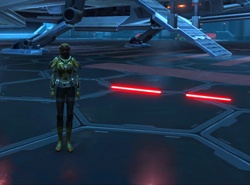 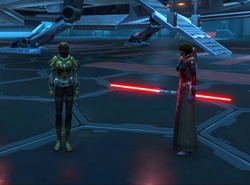 Now you see the companion, now you don’t…except for the lightsaber beam she left behind

How has been your week? If it has been like mine, it has been pretty hectic, not to mention trying to keep cool in the extreme heat. If that is the case, why not check out the articles below with your favorite cold beverage and enjoy reading what has been going at Corellian Run Radio the past week. After reading the articles, be sure to also comment on the rest of our staff’s articles. We really love your feedback and discussions. Let us know what you would like to see on the site.

07/25 Tactical Strike: Five Tips to Improve Your Teamwork by Geldarion