Today is your lucky day for I come to you with an offer. It is information about a fellow enterprising organization…a guild if you will, that has a little something of a “colorful” background. This fine upstanding guild has been smeared by the very officials that have sought their help to break blockades, obtain weapons, and other various services. They’re just a guild trying to make a living. All that I ask, as you read, is you listen to how the Mireth Syndicate came to be, and please pay your respects as we meet their guild leader Niatara. It’s really an offer you can’t refuse.

More about the Mireth Syndicate & their “family” after the Jump…

How did you and members of your guild get into RP? Did this influence your decision to play SWTOR?

I was 13 when I first started role-playing. It started on a chatroom and a forum a friend of mine showed to me. I created a character that has since become one of the more influential characters for a lot of the role-play. It was a boyfriend that got me more interested in Star Wars, Jedi Knight Academy to be precise, I joined a guild of people there known as the Jedi {O}rder or {O} and role-played there for several years before later being introduced to Star Wars Galaxies.

That game was what influenced me and 7 members of Mireth Syndicate’s decision to join TOR. Adeyna, my co-leader and best friend was someone I met via SWG, along with several other players that all decided to flow over to TOR when SWG closed its doors to us.

What led to the formation of the Mireth Syndicate? Where is your guild located, as far as server name and what type of server?

Mireth Syndicate’s formation was decided outside of the game and actually before it launched. The initial idea was that we wanted a family of Iridonian (for those that role-play it, that’s the Zabrak culture) that were smugglers and crooks, criminals, thieves, you know the whole gamut of stuff.

The syndicate was formed and initially we were located on Lord Adraas, but merged to Ebon Hawk when the mergers were opened. We’re focused on a role-play server, because we’re a role-play guild.

Your guild is a Republic guild correct? How did the guild decide on this faction? How hard is it to be a “neutral” alignment?

We decided on the faction because initially it was the smuggler class that appealed to us. Majority of us wanted to play Smugglers as in the game mechanic so that’s the side and alignment we chose.

We haven’t really found difficulty with being “neutral” aligned in regards to role-play, most people in the role-play community have been very accommodating and understanding of different factions working together. They know we’re republic, but we’re “neutral” and we’ve received a great deal of cross faction role-play regardless of that. 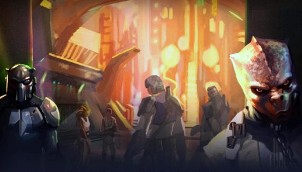 Along the lines of the neutral alignment your guild plays, do you and the members of your guild wish or like to see a third faction in the game? Do you think this might enhance the game in more ways than just RP?

I’m mixed about the idea of a third faction in game honestly. Right now I find it somewhat limiting without the ability to send tells to opposing factions as it is. We’ve often had to resort to forums and “chat” programs as it is to set up role-play with opposing factions.

A third faction only able to communicate itself I foresee exasperating that problem. Mind you, it would be interesting and fun to have a real “Hutt” faction, or something like that to be a part of.

Who came up with your guild’s logo? Is to pay homage to the Godfather movie poster?

Actually I came up with the guild’s logo and yes it was designed and created to pay homage for the Godfather. Since we’re a criminal guild, and my character is essentially the cartel boss. 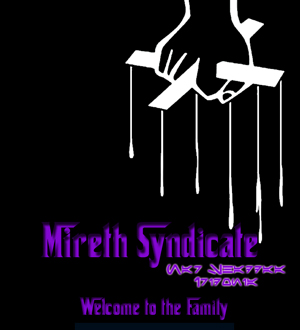 How has your guild taken the news of the Free-to-Play option coming this Fall to SWTOR? What positives and negatives do you think might come along with this new option?

Honestly, it hasn’t made much of a difference to our guild over all. If anything we’re expecting more people to return to the game now that it’s going free to play. We lost some players and some friends along the way for expense issues, so honestly what I see are positives, some good friends of mine might be returning because of this.

How has your guild worked around some of the faction restrictions in communication? Would you like to see cross-faction chat made available, at least in areas like Nar Shaddaa?

We utilize RP forums and voice messengers in order for communication now. There’s also Ventrilo and Mumble which we’ve also used to further our role-play.

I personally think some form of cross faction chat would be great in order to promote a chance for some good role-play.

Even though you are a RP guild, you all have worked at tackling the game content. What would you say has been the guild’s biggest achievement thus far? What goals does the guild have for the future?

Role-play is our biggest game related thing. While a lot of our members do raid and pvp and enjoy the game content for the most part we’re role-players, so I have to say that our biggest achievements are really in events that we have and put together. We have a lot of events and ado a fair amount of plotting on our end…it’s really what we’re the best at.

What is your current character’s class/advance class and level? Do you play several alts or do you focus on your main character?

Smuggler and gunslinger are what Niatara are. I do have a few alts, but honestly she keeps me pretty busy. 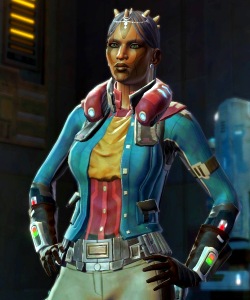 What did your guild think of the Rakghoul Event? Do you and the Mireth Syndicate want to see more of these events? What would be an event you would like to see in-game if you and your guild was “dev-for-a-day?”

I thought it was an interesting event, but it was unfortunately before we really had the membership that we do now.  I like the idea of static events and I think they can really add to the level of immersion in the game and really add some depth for the plotlines.

As for events…I honestly can’t think of anything off the top of my head. Maybe something involving the cartel and bounty hunters, I think it would be an interesting turn for criminal role-play.

Is Mireth Syndicate currently recruiting? If so what classes/advance classes is the guild looking for or need?

We’re never “actively” recruiting, but we are always keeping our eyes open. The best and really the only way into Mireth are via role-play. People role-play their ways in, either through one interaction or multiple interactions, we don’t have a set requirement, and we don’t have class restrictions or needs, Jedi, Trooper, Smuggler, if you’re a criminal and you pass the interaction test, you’re Mireth.

What is the best way for someone to contact the guild if they are a potential recruit, or anyone seeking information about Mireth Syndicate?

There’s myself and several lieutenants that can help with the role-play and getting people involved. I’m naturally the major contact, but my hours are odd and I’m not always on the same times and nights that other people are on.

Those are the main points of contact aside from me, but pretty much, if you see someone with a Mireth tag, they’re always up for role-play, so hit us up! Also be sure to go to our website and fill out an application.

Thanks to the whole “family” that is the Mireth Syndicate. I appreciate them letting us get to know them and see what goes on in their guild. Here is a huge shout-out to Niatara for all her help getting the information and being generous with her time. All the best to the Mireth Syndicate and please do not hesitate to call if you need a “favor.”

One Response to “Community Checkpoint”