This week, Bioware released the 1.4 patch onto the public test server for testing.  The problem is that the testing is not really public, is it?  With only select guilds and individuals eligible to have their characters transferred in their current state, the rest of us have to deal with what we had copied over previously.  This means that if you didn’t copy your character during 1.2 or 1.3 testing then you are out of luck and can’t test 1.4.

Bioware has announced that, due to limited resources, that they can only copy over characters from guilds that had provided testing feedback to them in the past.   Hopefully, some of you have characters copied over there so that you can check out the changes that are being made, specifically for operations.  I’ve had a glance at some of the gear and analyzed the upcoming patch notes and there are some good things that are being made and some… not so good.  Let’s take a closer look.

The stat grouping seems much improved over the previous tiers.  Basically, that means you don’t see as much tank armoring on dps pieces or dps mods on healer gear.  There is still room for improvement but it definitely isn’t as frustrating as the Black Hole/Campaign mods to min-max.  The main problem that I see is that the level of the gear (rank 63) is a very marginal increase over the current pieces (rank 61).  In some cases, the BH/C gear is actually better than the Dread Guard gear it is supposed to replace.  I suppose that, if you look across 14 slots on your character, a small increase in each piece comes out to a more sizable amount.  I just don’t think that it really is going to matter when going into Hard Mode Terror From Beyond.  Another issue I have with the new gear isn’t so much with the stats but, rather, with the design.  I can’t believe that all that was done to the looks of the gear during these last four months was a re-color. 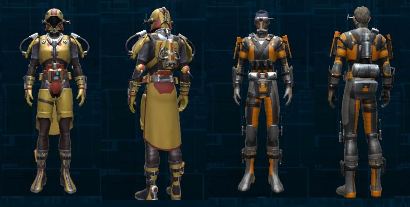 Looking over the changes in store for 1.4, I don’t see too many things that will drastically change operation functionality.  The biggest drawback is going to be with the changes to crowd control abilities, namely their reduction to 10 meters in range.  This makes those mob packs that are spread out a little harder to CC when pulling them.  Not a huge issue but it does mean that people have to be very coordinated in their execution.  The actual changes to class abilities are probably not going to be an issue.  In fact, some of the abilities, such as the sage/inquisitor self-heal and their reduction in force speed cooldown, are going to be very useful for operation content.

I am hoping that the nerfs Bioware has planned for the Explosive Conflict operation applies to the Story Mode version only.  If this is the case, I think it is a very good move because it opens the instance to a much wider audience.  Hard mode should be kept as it is because, let’s face it, it’s supposed to be hard.  At the same time, making EC more accessible allows newer players to learn the mechanics of the boss fights in an easier environment so that, when it comes time to go to hard mode, the learning curve isn’t as steep.  I am looking forward to seeing more people trying out EC because it really is a fun operation.

The biggest change, I feel, is the ability to trade items and buyback items you purchased.  This is something that I have been looking forward to for a long time and I’m sure that it will save Bioware a lot of time in ticket resolution.  Another huge update that we’ll see is going to be a drastic reduction in the cost to extract mods out of gear.  Currently, if you were to pull out all of your mods from a Black Hole level gear it will cost you over 100k credits.  After the patch goes live, that cost will be reduced by about 40% to 45% which will be a huge savings for those who like to change out the look of their gear.  Now, if we can only get the ability to do a ready check and a map ping…

Tune in next week for an evaluation of the Terror From Beyond operation.  With any luck, I’ll be able to get in there and test out a few of the fights.  Be sure to subscribe to my twitch.tv channel and you’ll be informed whenever I go live with a stream.  I’ve got a lot of ‘research’ to do in the meantime.  Ready check done?  Pulling in 3… 2… 1…