As I’m sure many of you are aware by now, Patch 1.4 is live! I am also sure that many of you have noticed, like all new software, it has some issues. While I am not a fan of these issues and in fact found myself shaking my head in disbelief…that is to say there are some things that are not good to be found in the latest update. Let me be clear, I hate bugs, glitches, performance issues, even small ones that deal with my companion’s head slot, but first off I am happy we have new content!

More on Patch 1.4 & Terror From Beyond music video after the Jump…

Yes, buggy and some hiccups, but it is new content and some welcome changes. I spent a brief time playing in-game with the latest patch and found some nuggets of pure goodness to savor while the other eye rolling bugs are being worked out. First on my list, the planet shuttles on Corellia, Ilum and Belsavis not only can transport you to the areas for that planet’s dailies, but you can use them to travel to each of the planets containing dailies. All I can say to that one is halleluiah! No using quick travel or spending credits on speeders just to get to your ship to basically go through two to three loading screens. This a very welcome change even to a fairly new level 50 working on getting commendations for mods, gear etc.

While we are talking mods and gear, this gets me to my next welcomed addition in this patch. Now it is cheaper for removing mods from your character’s gear. Personally, I think it shouldn’t cost anything…since I either had to buy it, make it, loot it, or get it in a quest reward, but that is a whole other issue. BioWare did make the change to lower the cost of removing those high end mods. This does not take the sting out of removing mods, but it does make it easier to use that awesome mod in armor you like the look of, instead of settling to wear something you loathe.

Oh, and while I was in the Black Hole area, I can confirm the mobs and “boxes” respawn at a much faster rate. Normally, I run my dailies later at night so I have less people to fight over said “boxes” and/or mobs, as part of daily quest line on Corellia. This afternoon there was around 50-60 people in the Black Hole area and there was not an issue being able to quickly get the first two segments of one particular daily…however now there is a bit of a “log jam” at the console for calling the last droid to defeat and retrieve his memory core. So my advice, group with someone waiting for the console and then there is less wait and the one droid is defeated faster.

The final one, I was able to briefly test, was the companion color matching system and hide head slot option. At first, while on my ship, I attempted to go through and unify my companions’ armor and hide their helmets and it appeared to be buggy or not working. That is until I landed and used it with the companion who was with me on the planet of Corellia. It worked as it was advertised and it was nice to be able to hide some of the less appealing head pieces and also match their armor pieces with their chest piece. The only question I do have about the color matching system, how does it go about selecting what colors in the chest piece to use?  Some of my guildmates and I were discussing this very topic. Some chest pieces might have one small fragment of yellow or even green etc. and that would be the color it would select to use on other pieces of armor. Again, I like the color unify system. It helps make the armor pieces on my companions and my characters seemingly appear to look more like they go together, but maybe if there was a system to pick one of three color schemes for armor pieces I would be even happier. I know just like the song…”I want it all and I want it now.”

What did you like in this patch? Was there something you were pleasantly surprised to see? Let us know in the comment section below.

Did someone say issues? Yes, yes, there are some minor bugs that are making this patch less than ideal. Below are some of the ones that were causing issues yesterday when I went to bed. Please take some time to read and also take a deep breath and know that though these issues had me frustrated too, the dev team is working as fast as they can to resolve the bugs.

Let’s see what all was included in Patch 1.4 before we get to the dev notes on the bugs.

Game Update 1.4: Terror From Beyond is now live in Star Wars™: The Old Republic™ ! This Game Update brings some exciting new content to The Old Republic™ including:
Operation: Terror From Beyond will take you to the remote world of Asation where the mysterious Sith Lords known as the Dread Masters have found a way to unlock the ancient Gree Hypergate, opening a door to an unknown place and an unspeakable horror that now threatens the entire galaxy. It will be your mission to close the portal before it’s too late and to destroy whatever gets through.
Read More

Besides the link Courtney included, be sure to read over the entire patch notes for 1.4 found here. 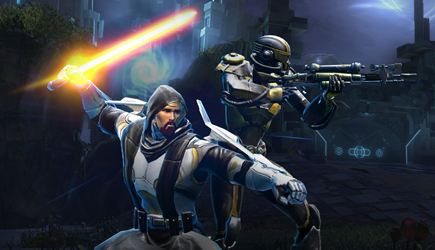 Okay now for some of the things they are fixing as we speak, or have done so, since this was written.

Okay, so who knew a shadow could cause soo much of a problem. Seriously, what they are doing is trying to optimize the game engine for better performance. While I sounded very official there, I could tell you more about shadow puppets as to tell you how this process actually is done to optimize the game engine. I do know that it is better to iron these issues out now than before it goes Free-to-Play. On the other hand, as much as I like the graphics in my game, after the first few days of gameplay I am turning down most of the “pretty stuff” to get the most optimization from the gameplay.

The Galactic Trade Network is currently unavailable and we do not have an ETA at this time for its restoration. Items currently listed on the GTN will have their auction timers expire as they normally would. We apologize for the inconvenience. This is a high priority issue that we are working to resolve.

The GTN is down, or was so when I wrote this part of the article. Now it is not the stock market in real life, but it is the life-blood of an MMO gaming economy. Hopefully this issue will get fixed soon and trading can resume as normal.

Great news about the status of the GTN from Tony Moreno:

This is awesome news to read about today. A tip of the hat to the dev team for working on this issue and getting it resolved as quickly as they could. Now I’m sure many are asking why it happened in the first place, and that can be debated. No matter how much troubleshooting a team does there will be bugs and glitches that pop-up.

We are aware of this and we are adding this to the known issues as well. Thank you, and apologies for any inconvenience.

I only went through one cutscene yesterday and it was the beginning of the “End of Torvix” quest, which does not show your companion, so I had not noticed this part of the companion helmet issue. I did notice that you had to go through at least one load scene before it registered that your companion’s helmet was hidden. Did any of you go through this issue of seeing your companion’s helmet in a cutscene, after you selected to hide it? Let us know in the comment section below.

Now I like to end dev notes on a positive note…not sure if many of you knew or not, but when server consolidations happened everyone got 12 character slots. Well, not everyone, the Oceanic servers did not. Now with the release of Patch 1.4, they now also have 12 character slots.

Most of you have been downloading and jumping into the new content from Patch 1.4. So while doing this you might have missed going to the website and reading some of CRR’s regular articles. On top of that, you might have missed our newest staff writer, Joe Foran’s news story, Extended Maintenance for 1.4. We want to welcome him aboard and hope you will enjoy his posts, as he will be helping to bring some of the news concerning SWTOR to all of you on the Corellian Run Radio website.

As you go through and read the articles, please take a moment and leave your feedback, comments, and suggestions in the comment section of our writers’ articles. We love to hear from you and want to try and make our site better for you! Thanks and enjoy the links below.

09/21 Operation: Information – Terror From Beyond Preview by Ghoztt

09/26 Tactical Strike: Special Holo – How to Guard Objectives in PVP by Geldarion

Do you have a server event or guild function you would like to have mentioned or highlighted? Please send us an email at corellianrun@gmail.com or email me at jason@corellianrun.com.  In the emails, please include the details for the event, any possible links where people can sign up or find out more information. We would love to highlight your event on Community Checkpoint!

Things might be a bit glitch, but the bugs will get worked out “soon.” In the meantime, sit back and check this video with Terror From Beyond theme. The Russian guild, BRC Empire Forces recorded this video of them taking on the second boss in the new Operation on Hard Mode. Congrats to them for taking down the second boss. Always remember to have fun in whatever you!