By now many of us know Patch 1.4 had some troublesome bugs. It added some great content with the new Operation Terror From Beyond. Speaking of which, be sure to check out Ghoztt’s article on this new Operation’s Hardmode. Okay, back to the bugs, companions were refusing to hide their helmet. I mean one minute I would click for a companion to have it hidden and then get into a conversation and what do you know…their helmet is back on. My companion is just looking at me like nothing is going on, as if I cannot see the helmet covering their face. I see some of you out there think it was bad coding etc. Obviously, some of you didn’t read the patch notes from October the 9th. 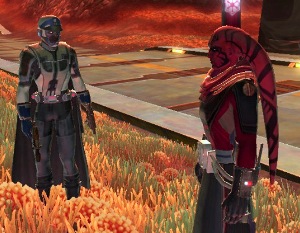 I thought I told you to take off the helmet.
Um what helmet?
The one on your head, you idiot

They directly address the companion helmet issue. I will quote the patch notes for Patch 1.4.1.

See, it wasn’t coding it was the companions showing lack of respect to us the players. Just wait till I use Sith Pureblood punish ability on my companions. They will learn to hide their helmets or else.

They fixed some of the bugs that showed themselves after Patch 1.4 was released, not all, but they got some squashed. My biggest praise is for getting the weekly missions to work again. I don’t mind dallies, but doing them without getting Black Hole Commendations is just not worth doing. Be sure to read all the notes for the October 9th patch, to see what other issues were addressed.

In the latest developer blog, we get to meet Jesse Sky the Lead Flashpoint and Operations Designer at BioWare Austin for Star Wars: The Old Republic. The blog is a really good read, especially the Q&A section. Jesse tells us who his favorite companion is and who he wishes he could have as a companion for his Jedi Guardian. Jesse explains why he likes his job as Flashpoint and Operation design. He also talks about how building bosses and game mechanics in these areas have become more demanding with today’s gamers figuring out fights faster. In his words, gamers go to great lengths to “pummel” bosses and challenges in these areas.

Aside from SWTOR, Jesse gives advice for those wanting to pursue a career in the gaming industry. He also tells us what he enjoys to do outside of gaming. What is this world he speaks of, outside of gaming? Hmm must be some new expansion pack or a bonus quest line. Seriously, be sure to read all about Jesse Sky, one of the hard working developers at BioWare Austin.

I asked Jesse Sky to tell us a little about how Nightmare Mode is going to differ from the existing Hard Mode for EC. He said that the numbers have been tuned up in every fight, and mechanics in every fight have been modified – in some cases, there are new mechanics that players will have to learn. The differences aren’t extreme, but they present new challenges in every boss encounters, and the rewards are much more appropriate for the difficulty (unlike in previous Nightmare Modes). 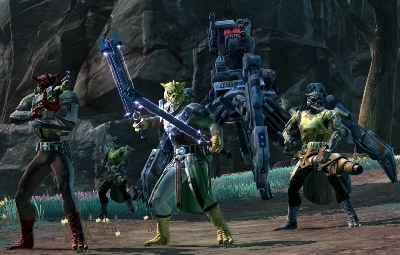 This sounds like some good news coming out about the Nightmare mode for the Operation: Explosive Conflict. Anytime you can add new mechanics to fights that add more of a challenge, rather than simply increasing the health points and/or damage attributed to the bosses makes the encounter fresh rather than the same thing. Add in the factor of “appropriate rewards” makes this something for endgame players to appreciate. I would hope the Nightmare mode rewards would tie into the new Operation: Terror From Beyond. Otherwise why go back to EC for lesser gear? Of course all this is speculation until it makes it into the live game. Let’s hope “soon” just isn’t a phrase.

We had some word from Jesse Sky on this a while back (post here). He mentioned that dueling is disabled on the Fleets right now due to potential performance issues. Adding a specific Fleet dueling area may be possible in the future (and it’s a great suggestion!), but it’s not in our immediate plans.

Personally, I hope they do not open up dueling on Fleet. It is annoying enough with the masses trying to get to a mailbox or GTN terminal, and now some even want to throw dueling in that mix on the Fleets…really? Hey, I understand wanting to see who the best fighter is one-on-one or just for the simple fact some people like to duel. I just don’t want to see it clutter either Fleet. Now, if they want to open up an instance or a dueling ring maybe on one of the other ships in the fleets, that would be great. In fact, if it was on another ship separate from GTN, trainers, vendors etc. I would go watch…maybe place a few wagers on the side. It could be a real draw for the game. Oh just had another idea, okay so both fleets have a dueling ring on a separate ship, but now what if I want to duel someone from the other faction? That’s easily solved…the Hutts are sponsoring duels on a space station above Hutta! Win so many fights there earn a title. BioWare, if you use these ideas, don’t worry about copyrights, I will just take a small monthly stipend lol.

We are still looking into some of the reported issues with specific sounds – we definitely haven’t forgotten. As soon as I have some new info for you, I’ll let you know right away. Thanks for your patience; we know that sound is a big part of your character and combat!

Not much to add, but it is good to know the devs know the issue and are working on it.

Hood up and hood down is still in the works. Unfortunately, it requires a few changes to our art pipeline and reprocessing those assets by the artists. The team has been hard at work on our upcoming content, and priorities put hood up/down on the back burner just a bit, but it’s still on the To Do list and we are still very much aware of the demand – by developers and players alike!

Well, it looks like our very own, Carla, will be waiting longer to toggle her character’s hood off. I am also hoping to see this feature added to the game, but I would rather it take them longer to get it right than to rush it and it cause additional problems…see issues from Patch 1.4.

It may seem like everyone or almost everyone is all doom and gloom when talking about SWTOR. I am the first to admit, some of the crazy bugs have gotten me a bit down, but I still enjoy the game, and there are others that still like the game, also. One fellow SWTOR player has recently started a blog, to highlight her adventures, post guides & videos and in her words, “have fun.” So why not head over and take a look at the Cheriebusc blog. Be careful, it might just inspire you to have fun in SWTOR. Kudos to the blog’s author and look forward to reading more posts there.

While many of you are busy logging back into the game to possibly be catching up on your Black Hole Commendations or maybe taking a crack at the new Operation: Terror From Beyond…don’t forget to take some time to catch this week’s latest podcast and your favorite CRR weekly articles. As you read our writers’ articles and listen to the podcast, be sure to take a moment and submit your feedback and suggestions in the comment sections. We love to hear from you. Thanks and enjoy the links below.

09/28 Operation: Information – Terror From Beyond HM Review by Ghoztt

October is the month for Halloween, pumpkins, and scary movies…one particular scary Alfred Hitchcock movie the Birds comes to mind. Talk about some upset or maybe some “Angry Birds.” Yeah, yeah long way to go for a pun…and nowhere to go (drum-roll). Okay enough of that onto the news…Justin Davis wrote an article for IGN, that states there is a Star Wars themed Angry Birds game in the works. On top of that, there plans to be a whole line of toys, clothes and bed linens to go along with the game. The article has also confirmed one item, a Star Wars based Angry Birds Jenga game. The pieces for the Jenga set form a pig shaped Death Star. See picture below. 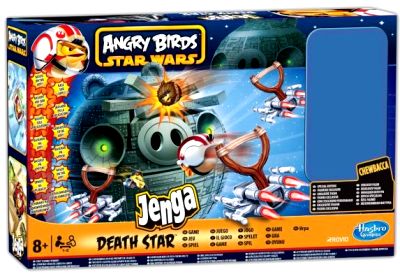 So far the known re-casts of the birds into Star Wars roles are the Red Bird which will be based on Luke Skywalker, the Yellow Bird will be the “shooting-first” smuggler/pilot Han Solo and his furry sidekick Chewbacca will be the Big Brother Bird. The speculated release date for the actual game will be November 8th. It is also reported to be available in versions for Android, WinPhone, Cell, PC and Mac.