The big news is that all of you who use to play or have not yet tried Star Wars: The Old Republic…can play the game for FREE starting today! Now, there are some restrictions that you need to be sure and read about on the official website. But, despite the restrictions you can play levels 1-50 through your character’s class story completely free. For those of us still subscribing to the game, it will be pretty much the same with added content, a new daily commendation area – Section X, a new quest line to obtain a new companion.

More on Patch 1.5, NM for Explosive Conflict & SWTOR Bungee Jumping after the Jump…

All levels of subscriptions Free-to-Play, Preferred Status, to and Subscribers can take advantage of the new Cartel Market. The new Market will use the new Cartel currency. The Cartel currency can either be earned by being a subscriber, by having been a subscriber in the past and returning you will have accumulated some Cartel coins for the months as a paid subscriber, and finally anyone can purchase Cartel coins for real money. As we have discussed in the past the Cartel Market has various XP boosts, consumables, armor sets, and two levels of packs to purchase. These packs can contain mounts, pets, armor, boosts, crafting materials etc. It is sort of like getting a “grab-bag gift,” you are guaranteed to get some items, including some good items, but what exactly they will be is anyone’s guess. Be sure to read the official patch notes and check the site for details on the different subscription models, restrictions and more on Cartel coins. 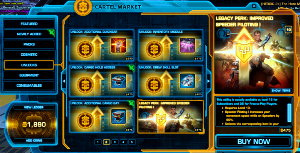 Just when you think the trolls have taken over the entire forums, there is a great thread like this. It is nice to see gamers wanting to help new players coming into the game. This can only be a good thing for the community and the game in the long run. It’s “pay-it-forward” in SWTOR. If you help 15-20 new players and just one of them becomes a subscriber, think of that over ever server. Yeah, yeah I’m a positive guy, but it can’t hurt to be helpful to players that maybe have never even played an MMO. Wear your Founder’s with pride and lend a hand when possible.

Hi everyone! The most recent word on hood toggle is from Matt Boudreaux in this post in early October:
“Hood up and hood down is still in the works. Unfortunately, it requires a few changes to our art pipeline and reprocessing those assets by the artists. The team has been hard at work on our upcoming content, and priorities put hood up/down on the back burner just a bit, but it’s still on the To Do list and we are still very much aware of the demand – by developers and players alike!”
The feature is still something we want to add, but we don’t have a date at this time.

Most of us are trying to take all in the content added in today’s patch 1.5, but one item that will not be on it is a toggle for hoods on or off. There are several wanting this because they like their armor, but do not like their character’s face being mostly covered, especially during cut-scenes. I tend to be on the other side of the argument, I would love to be able to put my hood up no matter what my character’s helmet happens to be. However, I would rather they get it right than rush this into the game and have it cause other issues…at least it is still being looked into.

We’ve investigated your reports, and Warlord Kephess has indeed been stingy with Armoring drops lately. We appreciate your patience and will be working on fixing the issue in an upcoming patch.

I hate it when bosses hold-out giving up the good loot. Glad to see BioWare is listening to the community and investigating the stingy Warlord Kephess. Thanks also to all those submitting tickets and making constructive posts to let BioWare know about issues like this.

He starts by admitting that Eternity Vault and Karagga’s Palace, while they both came with a Nightmare mode, it was not properly designed as far as challenging players or giving out the proper loot for the level of difficulty. Basically, Jesse is stating that they wanted to get the Nightmare mode correct for Explosive Conflict.

Okay, so what types of changes has been made that will set the Nightmare mode in Explosive Conflict and future Operations apart from the others. Jesse states: 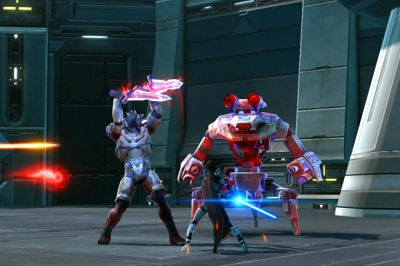 He goes on to state these changes are not going to take place in the previous two operations. However, like in the first two operations, if you complete Explosive Conflict in Nightmare mode less than 2 hours you will receive a special title. Be sure to read the entire article for complete details and keep an eye out for articles by Corellian Run Radio’s Ghoztt on this new Nightmare mode. 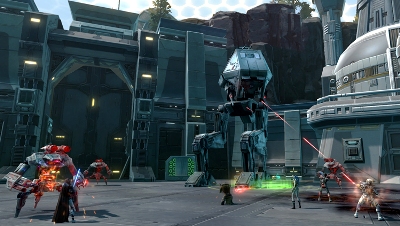 As many of you are updating to the new patch released today or eagerly waiting to get home to update to Patch 1.5, the devs gave us a bit of a tease as what we could expect to see in the new Section X area and more about the HK-51 missions. The new area, Section X, is located on the planet Belsavis. It will be an area for both Imperial and Republic to run new dallies. Jesse Sky informs us, that this area has two new Heroic missions and a rumored new Heroic World Boss, called Dreadtooth. Read up on the new difficulty changes added to this World Boss. The new dallie area is reported to give out more daily commendations and another area for Black Hole commendations. 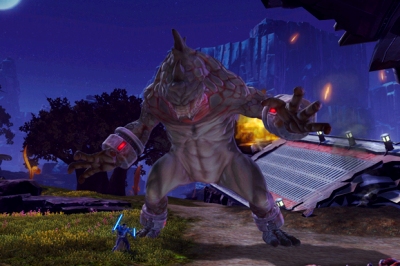 Now Matt Pucevich picks up the article to tell us more about the HK-51 missions. The mission story revolves around the recently discovered wreckage of a huge spaceship that was said to be carrying the last of the HK model assassin droids, specifically the HK-51 model series droids. These droids could easily turn the tide of galactic conflict between the Empire and the Republic. The one change in this quest is there will not be map notes telling players where to go exactly. I am very eager to start this quest line and obtain my very own HK-51 companion assassin, with all the murderous sarcastic wit the HK droids are known for. You will want to read the entire article for complete details.

Be sure to stay up to date with your favorite Corellian Run Radio articles and of course our podcast. As you read through our writers’ articles and listen to the podcast, take a moment and submit your feedback and suggestions in the comment sections. We love to hear from you. Thanks and enjoy the links below.

11/09 Operation: Information – The Terror From Beyond Hard Mode Strategy Guide by Ghoztt

Navy Reservist returns home to surprise his son on his birthday. He was able to pull off the surprise wearing a Darth Vader costume to his son’s Star Wars theme birthday. It is a very touching video especially with this past weekend being Veteran’s Day. It is safe to say there is definitely one boy truly thankful that “Darth Vader” is his father and is home! However don’t just take my word for it check out this video clip from the birthday party courtesy of ABC News.

Thanks to all our troops for the job they do.

I have been writing for Corellian Run Radio for over a year and have been playing SWTOR about a full year counting Beta. It still never ceases to amaze me the new and creative ways to enjoy this game. This week I have definite first…SWTOR Extreme Bungee Jumping! Yes, you heard me correctly, in-game honest bungee jumping. This is not a glitch or fancy camera editing, but a unique “sport” that two members of the guild Oppression came up with and filmed. Huge kudos to the two members, of the guild Oppression, KC and Adams, for the crazy new sport that is sure to be sweeping a server near you. Okay, I have talked enough, check out the video and see what you think of this extreme sport. Please leave your thoughts in the comment section below.

If you have an extreme sport or wild video you would like to share with us please send us a link to corellianrun@gmail.com and make the subject heading “extreme SWTOR video.” 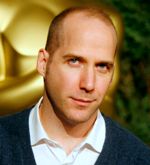 As many know by now, Disney owns LucasFilm Ltd and plans to release three new Star Wars films. The three films are only known by the working titles Episode VII, VIII, IX. Little else is known about the films themselves, but it does look like Disney has their writer for Episode VII. According to a web article on the website Zap2it, Michael Arndt will be the one “penning” the next movie story in the Star Wars franchise.

The article cites sources that he has already written a 40-50 page treatment for the next three movies. Michael Arndt has written on the movies Toy Story 3 and Little Miss Sunshine. Now many are wondering what this writer can do with the Star Wars franchise, I would site his next project to be released in the upcoming year, the next movie in the Hunger Games Trilogy – Catching Fire. Personally how he writes for another loyal fan based franchise like the Hunger Games, may very well give us a hint as to what we can expect in his writing for the next Star Wars movie.

If you have a particular link, story, video, or topic related to SWTOR we would love to hear about it! You can send those to us here at Corellian Run Radio and we can place it in a future article. Just email us the links and/or the details for the event at corellianrun@gmail.com, or you can also leave any link suggestions in the comments below, or in Corellian Run Radio’s Facebook group. Thanks and see you all next week!