Time again to look at part of the SWTOR community, this time we look at a guild who has accomplished a huge achievement, in fact a server first. The guild, Night’s Radiance was able to take down Kephess, the final boss in the Explosive Conflict Operation. They did this in the new Nightmare mode added to this operation in the Patch 1.5 content. Taking down Kephess is an amazing accomplishment by any standard, but now take in the fact that at the time of this achievement their guild roster had only around 11 total members. This takes Yoda’s question of, “Judge me by me size do you?” to a whole new level. Let’s learn more about this small, but close knit group of gamers that enjoy gaming with a purpose, but like to enjoy having fun.

Tell us a bit about yourself and how you came to be a part of Night’s Radiance?

S’zeth here, at least as most know me. I have 4 50’s currently; Sage (Renarin), Guardian (S’zeth), Shadow (Nohadon) , and Commando (Talanel). I’m a very laid-back person and I always enjoy joking around during the ops and pvp that we do.  Some call me a griefer, at least when I’m on my sage lol. Force Rescue is THE BEST!

I started the guild initially on Ajunta Pal as Knights Radiants and its only members aside from myself were my wife and her two brothers. My wife needed more bank space so we bought a guild bank 🙂 haha. We were lucky enough to join a PuG group for EV HM with Quintain, Tarnet, Madmartigan, and Zesh one night and we all had a good time, so we stuck together. We’ve added a few more members through the months that we really enjoy hanging out with.

Is this your first guild in SWTOR? Did this have something to do with the guild getting started?

Yes, this is my first and only SWTOR guild. I came from a hardcore raiding background in EQ2 and somewhat in WoW, so we wanted to keep this group nice and laid-back so that we can really enjoy the game when we play!

How did Night’s Radiance get started?

It was started as family and friends that decided we should form a guild so we didn’t always look like a PuG!

“The guild was initially formed around a family who played together. S’zeth, his wife Jas’nah and her brothers, Jom and Matrik. Along the way we picked up a few more players who’s personalities and play styles meshed well with the guild previously on Flashpoints and Operations. Most of these players were in the process of leaving guilds that were dying during the period of where large amounts of players were leaving SWTOR.
At this date the guild consists of Eleven members. Making us a very small, tight-knit and casual guild that still manages to clear content.”  – guild member Kevlar

What server and faction is associated with the guild?

Jung Ma, Republic. We just recently formed an Imperial Guild, Obsidian Dawn, in which we plan on raiding some as well.

Your guild was recommended to for this article by another guild because of an achievement, in fact a server-first. Can you tell us about this achievement and how difficult it was to accomplish? 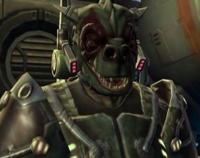 The funny part about the server-first is we weren’t even trying to accomplish it. We were merely being stubborn because all of the other content we’ve cleared was relatively easy for us as a guild. NiM Kephess is the first boss that challenged us as a guild in each of our roles, and we enjoyed that challenge so we wanted to complete it. We find it cool that we managed to get the server first, but that was just a side-note to us completing the content as a guild. It was a fairly tough fight, but I appreciate that in an ops. The content isn’t as fun if it’s all easy.

Here is a video of their server first achievement:

I think that Nightmare mode for EC was perfect in reference to the Firebrand/Stormcaller fight as well as with Kephess, but I found the Zorn/Toth and Vorgath fights to be disappointingly simple. I would love a revisit to Nightmare EV and KP to make them more difficult with added Black Hole comm rewards!

Night’s Radiance is a smaller guild is this by choice or the fact the guild is relatively new?

We stay a small guild by choice. We all want this guild to remain laid-back and we have found that the easiest way to stay away from drama and whatnot is to keep our group small. We don’t really have a schedule or anything of the sort, and we’ve found that it works really well for our group.

Along those lines, is the guild currently recruiting? If so are there specific classes/advance classes the guild is looking for or needs?

We aren’t currently recruiting any members, but we do enjoy bringing in PuGs for some of the easier content that we run with alts such as Hardmode Asation.

Why did you join the guild Night’s Radiance?

Shinto-Ryuken – “I joined because I loved the guild’s name.”

Inyusha – “I joined because my dad is in the guild.”

Nakari – “I was looking for a serious raiding guild that didn’t take raiding seriously.”

Hirse – “S’zeth basically bullied me into it. I’m pretty sure Kev still cries about it from time to time! Haha.”

What is the best way for potential recruits to contact you for more information and apply to the guild?

Our recruiting is done almost entirely through ops with voice chat. We’re more about how well people mesh with the personalities of the current guild members than how well they play their class. I’ve found that it’s easy enough to help someone improve their play-style than their attitude. So, in short, its best to have a sense of humor and not be sensitive. We all crack jokes on each other on a regular basis, so you need to be able to take it as well as you dish it out!

What is one thing about Night’s Radiance that sets itself apart from other guilds?

We value the happiness of our guild members more than the content we clear or the loot we get. We try to take care of each other first; what we accomplish after that is just the icing on the cake. We constantly joke and make cracks about each other. Anyone that has watched our videos can tell you that for sure! We’re just a small group of extremely skilled friends that enjoy doing in-game things together. We don’t have any kind of a schedule. If most of the people are on, I’ll simply text the rest of them and see if they want to do an Ops!

Thanks to the guild Night’s Radiance and their leader, S’zeth for making his article possible. Once again congrats to them on their server first achievement downing Kephess on Nightmare mode. We wish all the best to this small band of guildmates, as they continue on in SWTOR or anything else they set as their goals. If you want to contact them or get some more information about their guild check out their website.

That’s it for this week’s Community Checkpoint. Would you like to have your guild, event or server group highlighted on Corellian Run Radio? All you need to do is submit your guild’s website and some basic information in an email to us at, jason@corellianrun.com or corellianrun@gmail.com. You could be who we highlight next here at Corellian Run Radio. Thanks and see you next week!