Today marks two weeks till the one year anniversary of Star Wars: The Old Republic going live. BioWare has already announced that there are new Cartel Packs to be released soon, but to mark the anniversary they are giving away free fireworks. According to the news article on the official website, all players with a valid account by December 10th, 2012 at 11:59pm CST will be eligible to get 25 stacks of faction-based fireworks in their in-game mail on December 11th, 2012.

More on 1yr fireworks, feedback wanted & more after the Jump…

Besides the free fireworks BioWare is wanting to get your anniversary screenshots. These screenshots will have a chance to be showcased on the official website and their Facebook page. They have not given an email or forum thread where to submit the screenshots yet, but as soon as we know Corellian Run Radio will make sure our readers and listeners know. Where and how will you and your guild celebrate the 1yr Anniversary? Let us know in the comment section below. 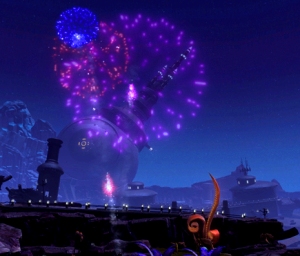 Executive Producer, Jeff Hickman has written a new article on the official SWTOR site. He is stressing the importance of player feedback, especially since the release of the Free-to-Play option. He mentions also the changes that have gone into effect as of December 4th. Preferred Status players now have been given two more Quickbars, increasing their total to four total Quickbars for free to qualified Preferred Status players. Jeff Hickman also announced that the Global Active Character limit for Subscribers has been removed. He talks about the number of characters subscribers can make.

“If you wanted to, you can truly create your own army of Troopers or a legion of Sith Warriors.”

Thanks can go directly to players giving their constructive feedback on the forums and also to BioWare for listening to the players’ feedback. As Jeff Hickman mentions, keep on posting to the forums. Just remember to be detailed and constructive on your posts. 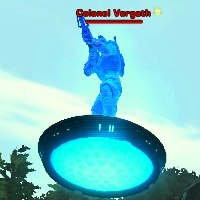 Hey folks, I spoke to designers Toby McCall and Jesse Sky and this is what they had to say about this:
When Nightmare Mode was released, Overload had no activation time, but its ballistic component was not working (which meant Overload could be completely ignored). We corrected this in the patch. In Nightmare Mode, the optimal path will always appear on either the left or the right wall, so a wall will always be available for tanking the demolitions probes.

It looks like this problem has been fixed in the latest patch. However, if you or your party runs into this issue should create a detailed ticket and also post to the developers in he forums.

Hey everyone – I asked Lead Designer Damion Schubert if there are any new updates on this topic. We still do not have an ETA for the implementation of this feature, but we’re definitely aware it’s something players want. We did attempt a version of chat bubbles once, but they introduced some severe performance issues, and we’ll need to address that before they can be implemented. Thanks for your patience!

It still looks like there are no chat bubbles in the near future, but at least they are looking at how to implement them properly into the game. Hopefully they will be here in the upcoming Spring…maybe.

Hey everyone; I asked Lead Designer Damion Schubert for an update on neutral gear. He let me know that the implementation of this feature isn’t planned for the immediate future, but that it’s still something we want to do. When we do add it, you can expect a variety of gear for neutral-aligned players.

Unfortunately, for those players playing the Neutral path with their characters, they still have no “grey” or neutral gear. However, it does appear to be something they fully intend to bring to the game. Actually since the new Cartel Market is in the live-game, neutral gear would be not only another vendor item, but also something they could sell for Cartel coins. Anyway that this makes its way into the game is a good thing…let’s hope it is sooner than later.

Hello! Just as an update to this thread, we are definitely aware of a small number of users experiencing an increase in memory related crashes with the game client since Game Update 1.4. Rest assured that we have been and are working on optimizations to improve performance for those players affected.
Thank you for your patience, and please continue to report your relevant information in this thread as it helps us in our optimizations.

If you are experiencing any of these issues or have this happen in the near future, then you need to leave the developers details about what was happening when the game crashed to the desktop in this thread. The more details you can provide the better information the developers will have at their disposal to help fix the issue.

Carla and Deirdre are back this week with another great podcast. Make sure to take a listen and leave them your feedback on this latest episode. Also don’t forget to take some time to catch your favorite CRR weekly articles. As you read our writers’ articles and listen to the podcast, be sure to take a moment and submit your feedback and suggestions in the comment sections. We love to hear from you. Thanks and enjoy the links below.

Next week I will be giving some more Star Wars themed gift ideas. In the meantime, let us and fellow readers know what was your favorite Star Wars Christmas/Holiday gift that you gave or received in the past? Leave your favorite Star Wars gift in the comment section below and also feel free to share any gift ideas you have come across. This might just give some ideas to those of us finishing up our Christmas/Holiday gift shopping.

I came across another SWTOR music video by last week’s video creator. The character Quistas and other players from the Harbinger server are engaging in Open World PVP on Corellia in the Black Hole area. To me this is encouraging that players are wanting Open World PVP. Now we just need BioWare to take some notes. Okay enough of that…this is another well done video. Please take some time and leave the video creator your feedback and likes on their Youtube video page.