Welcome to the war, comrades. You have been selected to receive the latest training and tactics fresh from the warfront. The tried-and-true strategies you are about to hear are extremely effective and CLASSIFIED. Let’s get to the briefing. This is your go-to guide on the Ancient Hypergate warzone.

Update 1.6 was the long awaited PvP patch, including a new warzone, Ancient Hypergate! Now that it has officially launched, here is a complete guide with some new, clever strategies at the end.

You will notice it is probably the most beautiful PvP map in the game if you have time to enjoy the scenery, which fortunately, you don’t! This is a dynamic and enjoyable warzone, with lots of movement and lots of killing.

Here is the map of Ancient Hypergate with some notes. 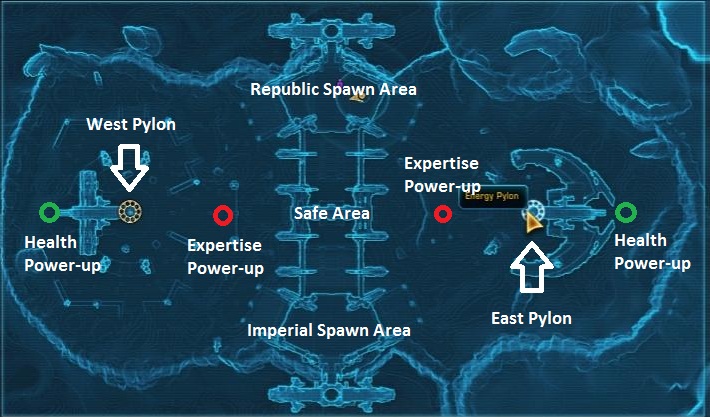 Ancient Hypergate consists of rounds that cycle among capturing pylons, killing players and gathering Gree energy orbs, and running for safety at the end of the round to avoid dying in the shockwaves produced by the pylons.

Capturing the pylons works just like it does in Alderaan Civil War. It is pointless to attempt to capture a pylon that someone else is already capturing. You can be interrupted just like in ACW and will have to start completely over. It is a 6-second cast time.

The first way to score is by capturing a pylon. It seems there are different rules governing how many points you will get based on whether or not your team already owns a pylon. If you capture a pylon when you don’t have one already, it awards some number of points, depending on round (the reports of others and my observations seem to be inconclusive on how many). Double-capping (getting both pylons) doubles your score for that round. Double-capping also completely erases the other teams score for that round, but leaves their permanent score intact (i.e. resets their accumulated energy potential to their permanent score).

The primary way to score is by running to the middle, picking up a Gree energy orb, and bringing it back to a friendly pylon. Picking these up gives you 1000 attacker points, and killing an enemy orb carrier gives you 500 defender points.

There are only four Gree energy containers in the middle, and they have a respawn timer, based on when the previous orb carrier died or deposited their orb. Once you have the orb (which comes in the form of a buff), you run back to the pylon to deposit it. You only need to get back to the area of the pylon and the buff will disappear. 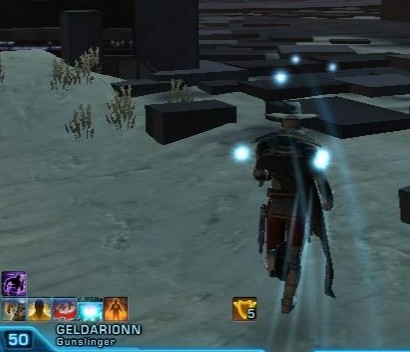 Once you deposit the orb, it gives a straight number of points which is twice the current multiplier. These points are added to the permanent score (i.e. you cannot lose them in the case of a double-cap).

There is a 2.5 minute timer that ticks down as you are capturing pylons and gaining points. When this timer finishes ticking down, the pylons will charge up and the energy will disperse in a giant shockwave that kills anyone outside. The only safe places are the spawn points, the areas under the spawn points, and the middle area. Needless to say, CC-breakers will be very important in this part of the game. While the pylons are charging (little circles turning the team color), the pylon cannot be flipped, but kills during this time do count towards the score.

Once the shockwave explodes, the accumulated energy potential will turn into the permanent score. If either team’s permanent score is higher than or equal to 600 points, the game is over. Note that you can get over 600 points of accumulated energy potential before the shockwave starts but you will still have to finish out the round to make it into the permanent score. This can result in games that end up scoring higher than 600 (I saw one that went up to 888).

Ancient Hypergate can be confusing at first, especially because of the explosion mechanic. Here are three things I recommend new players do: